Following in the footsteps of the successful 2016 Jungle Book remake Disney has given the live action treatment to another one of its classic tales, Beauty and the Beast. Taking the 1991 animated classic and replacing it with humans and CGI’d characters this modern reimagining does not stray far from the original.

Emma Watson is not bad as the book loving dark-haired beauty Belle who’s bored of the confinement and small-mindedness of her village. Those of you wondering, can exhale in relief that I can confirm Watson displayed no trace of the angsty, overly stressed Hermione. It’s safe to say Watson’s left the world of Harry Potter firmly behind her. That said, walking through the beautiful village as the villagers sing heartily about her being ‘odd’ didn’t quite compute. Seeing as we’re remaking all these classics, how about pushing out the boat? Maybe the lead girl, shouldn’t be so ‘perfect’? Especially in a tale like Beauty and the Beast. There was room to have Belle be a bit quirkier, maybe an edgy haircut or something. But, we only realise Belle is ‘odd’ because of the song and because she gets cussed out for trying to teach a little girl to read.

Belle lives with her inventor father Maurice (Kevin Kline) – mother deceased, and in her simple world is overly harassed by the village hunk, Gaston (Luke Evans). Evans does a good job playing self-obsessed, a little bit dim and a lot arrogant. He looks the part, acts the part, and the banter between he and his right hand/man servant LeFou (Josh Gad) is entertaining, if not a little overcooked. Gad’s LeFou is funny and he’s well cast, but his bumbling foolishness is predictable and although you laugh at his moments, it’s all a bit done before.

Maurice does go on a fateful trip which sees him stumble upon an enchanted castle ruled by an angry beast in clothes who lives with and served by, talking household objects. When Maurice fails to return home, a determined and independent Belle sets off to find him, and when confronted by The Beast (Dan Stevens), exchanges her father’s freedom for her own. The BWA (Beast With Attitude) is salty because he’s spent so many years as a horrific beast and not living the rich carefree life as the handsome prince he used to be.  Conflicted between his over active pride and the fact he’s finally close enough to a girl who may be able to break his curse, BWA stomps around the castle switching between trying to scare Belle, and charm her.

We get to glimpse Stevens as the prince in the opening, pompous prince gets cursed by a happened to be in the area old witchy woman scene, in which he’s a bit meh. But Stevens in CGI as the beast is brilliant. He’s a great beast. Almost too great as the beast, so much so when he’s re-revealed at the end, I was wondering if Belle felt a tinge of disappointment. I may have to have a conversation with myself, but I found The Beast absolutely more attractive/engaging than when he’s in human form as the prince. 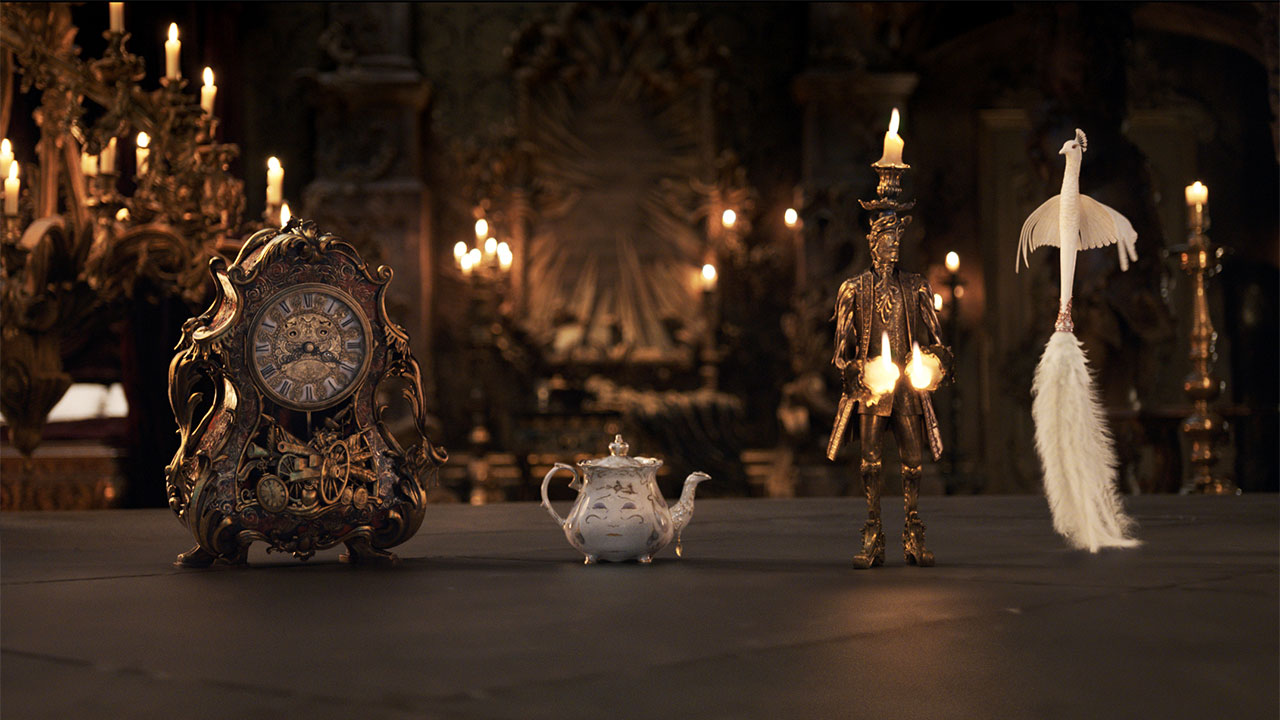 BWA’s crew of crockery and metal ware is led by Lumière –  a candelabra well voiced by Ewan McGregor and his sidekick Cogworth an ornate clock voiced by Sir Ian McKellen. A fun pairing. McGregor’s French accent is nicely camp to McKellen’s flustered British. Gugu Mbatha Raw voices Lumière’s feather duster love, Plumette who doesn’t do much but float around prettily and utter nice words also with a French accent. Award-winning singer and actress Audra McDonald voices Madame Garderobe, an eccentric wardrobe. She also does well but is extremely underused considering her Tony-Award winning singing voice and all. Mrs Potts the Teapot is voiced by Emma Thompson doing Cockney. The household items are the charm of the film and are definitely the best of show.

BWA starts to let his guard down, allowing Belle to see beyond the beast and whilst they do fall in love, Belle isn’t all the way happy because she misses her father. Now he’s no longer Mr. BWA, The Beast allows Belle a glimpse of what’s going on back in her village via his magic mirror, to which she sees her dad about to be sent to a mental asylum at the request of Gaston. The Beast allows Belle to go back home to save her father. She bumps into Gaston who again harasses her about becoming his housewife. Belle again says no, and uses the magic mirror to verify Maurice’s claims that the beast exists. Clicking that The Beast is his love rival, Gaston in a jealous rage leads the villagers down to the enchanted castle, where they have an epic showdown with the Castle’s interior decorations.

Gaston and the Beast have a testosterone fuelled fight over Belle; Gaston pulls the old ‘save me’ move, Beast who’s all reformed does, but then Gaston shoots him. Beast dies just as the last – I forgot to mention the rose inside the glass case. The curse is set around a rose. With each falling petal The Beast and his former staff turned household goods will be set in their new form unless someone comes to break the curse. As the Beast dies, the last petal does indeed fall but Belle saves the day by kissing him, declaring her love and all is right and back to normal.

Is Beauty and the Beast 2017 good? It’s a solid do over.  I’m not mad as some are that it sticks to the traditional love story. Modern women aren’t all frozen feminists who hate men and romance. So this was nice. The songs are a great combination of old and new. Jon Legend and Ariana Grande do well with their version of Beauty and the Beast originally sung by Celine Dion and Peabo Bryson. The whole LeFou being gay furor is so subtle you could miss it. My issue is this modern way of forcing the issue. The way they established LeFou’s sexuality at the end was a bit last minute, it wasn’t seamlessly woven into the story, if I was a gay man, I’m not sure if I’d be happy that the bumbling LeFou would be my choice of poster for the first gay Disney character. But, I’m not a gay male so I’ll let them make that decision.

Beauty and the Beast does well with diversity in a way.  Our very own Blacklister Ray Fearon has been cast as Père Robert, a kind village friend to Belle, he gets to speak a few lines and some good close ups. The other thing which stood out was the ensemble cast included plenty of black women who got to wear their afro hair as coiffured as everyone else and don fancy ball gown dresses. Along with the casting of Mbatha Raw and McDonald who although spend most of the film as objects, I appreciated their inclusion. Accompanied to the screening by my 16-year old daughter, who Disney has ignored until Princess and the Frog, it was a moment for us. More please.