I do love Marvel films, and the whole superhero thing, but not overly invested. When Thor was next to be adapted I was mostly happy that Idris Elba was cast as the all seeing Norse God, Heimdall. This is when colourblind casting works. (Quiet geeks).

I’m not even going to pretend that I remember all the threads and tales of Thor’s journey as the superhero who looks like he belongs on an American high school football field with a cheerleader hanging off his arm. Such is the interlocked world of Marvel that unless you were raised on the comics and given exams after every film, you’re never gonna get it.

The good thing about Thor: Ragnarok however, is that although there are, as is par for the course, nods to inside jokes, and plot reveals / explanations which originated in other Marvel films, you never feel that you’re on the outside of the joke… of which there are many. Jumping out the gate with wisecracks and sarcasm, Thor 3 in synopsis is as follows – Imprisoned on the other side of the universe, the mighty Thor finds himself in a deadly gladiatorial contest that pits him against the Hulk, his former ally and fellow Avenger. Thor’s quest for survival leads him in a race against time to prevent the all-powerful Hela from destroying his home world and the Asgardian civilization. 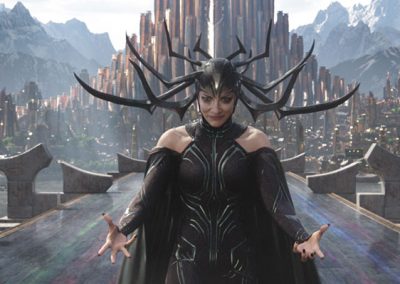 We meet Thor (Chris Hemsworth) in a predicament which, at first, is almost convincing that he’s never going to make it out alive, but he does and then begins his understanding that the visions he was having during Avengers: Age of Ultron are actually Ragnorak – the predicted destruction of Asgard. At first it’s not clear what or who will end his homeland, but it’s not long before he and his adopted brother Loki (Tom Hiddleston) get updated via their really angry and vengeful sister they never knew about, Hela (Cate Blanchett)… who does look a little like Maleficent when in full war garb.

After the brothers leave their sister wreaking havoc on Asgard, they find themselves trapped on a ravey hedonistic like planet lead by the brilliant Jeff Goldblum in full eccentric form as the, Grandmaster. This is when Thor: Ragnarok borrows completely from the Guardians of the Galaxy colour palette and turns it up warp 100%.

It’s so bright; and with all the jokes, you could almost be irritated. Especially if you prefer superhero films and their heroes to be dark, broody and somewhat sombre. Even I was almost annoyed, but, unlike Guardians, Thor: Ragnarok manages to combine its silliness with a strong story, or should I say it manages to laugh at itself without patronising us. It also knows when to reign in the laughs. Although every character is allowed at least one, one-liner.

There are new characters like the brilliantly funny rock monster-thing Korg (Taiki Waititi), and Tessa Thompson as Valkyrie, a rebel, running away from her past. Another shout out to colourblind casting, as the comic version of Valkyrie is blonde and well, Nordic. Thompson is good. Her British accent could do with a little teeny tiny work… as at times it seemed she was using all the tips to stay on voice, but she’s a welcome addition to the narrative! Fans of the Hulk (Mark Ruffalo) will love that Hulk’s personality is given much space and the banter between Thor and Hulk / Bruce Banner will keep you laughing. We also see a bit more of Elba as Heimdall which is another bonus.

Summary Thor: Ragnorak has been upgraded. It's more funny, it's more colourful, even a tad silly, yet it doesn't patronise the audience and knows when to reign it all in. Psychedelic and noisy this is a brilliant effort from new member of the Marvel director's club, Taika Waititi