Warning: Use of undefined constant TDC_PATH_LEGACY - assumed 'TDC_PATH_LEGACY' (this will throw an Error in a future version of PHP) in /home/customer/www/thebritishblacklist.co.uk/public_html/wp-content/plugins/td-composer/td-composer.php on line 109
 92% #OutOf100: Sheku Kanneh-Mason and Jeanine de Bique Shine With The “Chineke! Orchestra” in Prom 62 | The British Blacklist 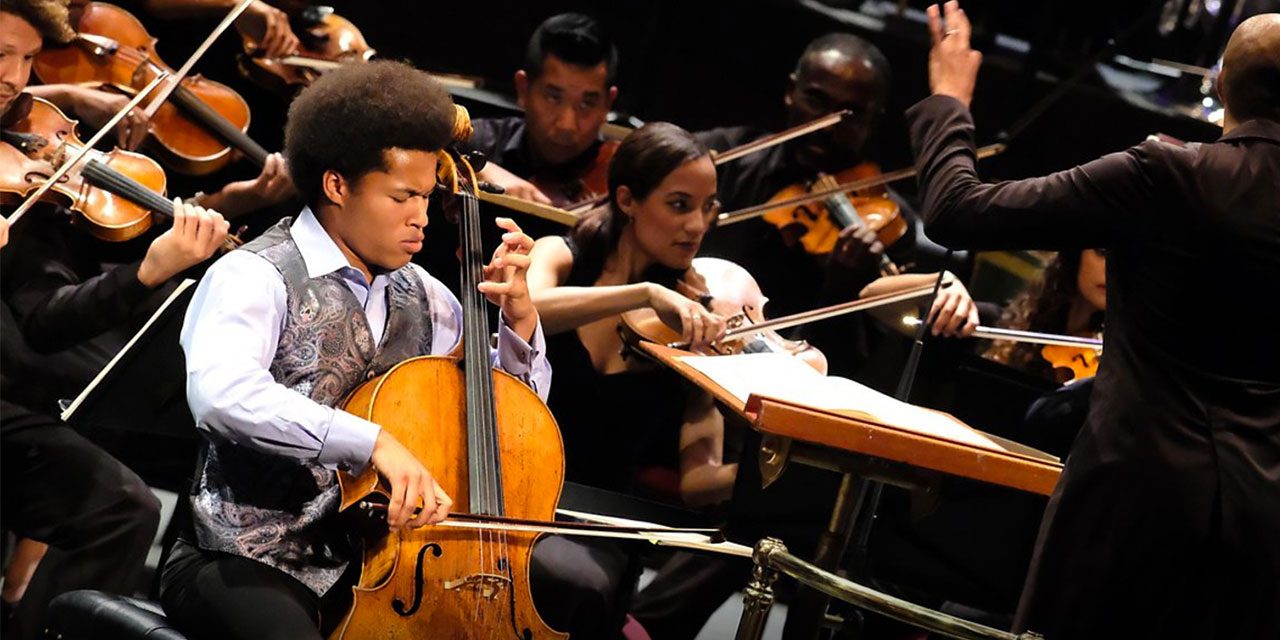 On August 30th, the late night Prom hosted the Henry Wood Promenade Concerts debut of the Chineke! Orchestra, and it was an unequivocal triumph, despite its disappointing time slot!

Classical Nigerian-Irish Londoner and double bassist Chinyere Adah “Chi Chi” Nwanoku, OBE, has an eclectic, distinguished career, which goes from strength to strength. As a professor of Historical Double Bass Studies at the Royal Academy of Music and founder-member, her latest triumph comes after the incredible achievement of pulling together not just Britain’s, but Europe’s, first professional (and associated junior) BME-majority classical orchestra. Named the Igbo translation of “God makes/creates“, the Chineke! Orchestra debuted  at the Queen Elizabeth Hall in September 2015 as an associate orchestra of the Southbank Centre with the motto ‘championing change and celebrating diversity in classical music.”

A touch of the Divine might well have been at play, since earlier the same year in May, a Nottingham family sextet (made up of the older 6 of 7 siblings), performed in Britain’s Got Talent, reaching the semi-final. It featured 3 future (and current) Chineke! members – the 3 eldest, Isata (21, piano), Braimah (19, violin) and Sheku (18, cello) Kanneh-Mason.

Sheku is the current superstar of the brood, parented by business manager Stuart Mason and former university lecturer Kadiatu Kanneh, and citing the accomplished cellists Jacqueline du Pré and Mstislav Rostropovich as his “musical heroes,” alongside Bob Marley. Having passed the Grade 8 cello examination with the highest marks in the UK at 9 years old, he went on to become the first African heritage winner of the BBC Young Musician  competition, 2016, at the Royal Festival Hall with Shostakovich’s Cello Concerto No.1 (1959, and widely considered to be one of the most difficult concerted works for cello). He was the subject of a 2016 BBC Four documentary entitled Young, Gifted and Classical: The Making of a Maestro, performed at BBC Proms in the Park, Wales, and went viral with his haunting 2017 arrangement and YouTube tribute to Leonard Cohen, Hallelujah, which he also performed at the 2017 BAFTAs. There are 4 younger sisters studying 2 instruments a-piece: Konya (17, piano/violin), Jeneba (14, piano/cello), Aminata (11, violin/piano) and Mariatu (8, cello/piano), so Chineke! may yet see the entire family reunited in harmony one day.

For the end of August, the Royal Albert Hall was around ⅔ full of excited anticipation, as the earlier concert ended and they prepared for the next. The Orchestra appeared to enthusiastic, warm applause, and made way for the acclaimed Ghanaian-German conductor, Kevin John Edusei, appearing with them for the first time to perform his chosen programme of miniatures.

They opened with the world premiere of young Guyanese-Brit Hannah Kendall’s BBC-commissioned The Spark Catchers. This energetically contemporary piece takes inspiration from the urgent energy of Ethiopian-Brit Lemn Sissay’s poem of the same name, and tested the orchestra to the limit with its imaginatively intricate flashes of sound. Incisively sharp violin and piccolo rhythms captured the dance of flame in Sparks and Strikes, a solemn French horn chorale lent a melancholy to The Molten Madness, the  light, illuminating glockenspiel and harp for the quite beautiful Beneath the Stars/In the Silver Sheen was my favourite, and then back again with The Matchgirls March. One of 2015’s “brilliant female composers under the age of 35,” Edusei invited Kendall on stage to take a bow. Personally, it did not capture my imagination or emotion as expected, but I was proud to be part of the occasion.

The hugely anticipated Sheku Kanneh-Mason, took centre stage next with his  407 year old Amati cello (on permanent loan through Florian Leonhard Fine Violins from an anonymous donor) for a double helping of achingly beautiful  renditions of Dvorak’s Rondo in G minor. Op 94 and David Popper’s Lisztian pastiche Hungarian Rhapsody, Op.68. His confidence seemed to find expression with his bowing, which quickly grew for him to fully find his stride with his amazing virtuoso second performance. A standing ovation and a second bow were well-deserved! His Dvorak moved me to tears and his Popper took my breath away.

Next, reputedly the most performed piece of music by an American composer, Lyric For Strings by the first African descent Pullitzer Prize winner for music, George Walker is an arrangement of the Molto adagio second movement of his First String Quartet (1946). This is a wonderful piece of understated intricacy and romantic strings, a beautifully rendered highlight for the orchestra as a whole.

Then the petite and expressive, award-winning Tobago-born soprano Jeanine de Bique performed three short, bel canto Baroque arias with ‘winning panache,’ a confident vibrato and great skill in the coloratura sections – George Frideric Handel ‘s Da Tempeste as sung by Cleopatra in Giulio Cesare, followed by Au penchant qui nous entraline by Joseph Bologna, Chevalier de Saint-Georges, thought to be the first known composer of African heritage, having been born to an 18th century plantation owner and slave in Guadeloupe. He was known as a ‘black Mozart’ and virtuoso violinist. De Bique ended with Handel’s  Rejoice Greatly from his Messiah, and, again, earned a standing ovation and second bow. Personally not a massive fan of the coloratura in any voice bar the stunning Kathleen Battle, I could appreciate why Ms de Bique is the recipient of so many awards. She won more than a few avid admirers in that audience.

The evening finished with a superbly bold performance of Nikolay Rimsky-Korsakov’s Capriccio espagnol. Over 5 movements, the Spanish themes, of dance character expressed the very essence of the composition for him. Edusei and Chieneke! received over 5 minutes of standing ovation, during which each orchestral section took two bows! Fantastic stuff.

The Chineke! Foundation is supported by the BBC, Association of British Orchestras, Royal Philharmionic Society and Arts Council England. So, I am at a loss to explain the late night slot, and must wonder whether it was rooted in a low expectation or simply available scheduling. Still, the high standard of performance and the massive success with the attending audience should earn them a mainstream Prom platform to play an extended programme at a future season.

Catch this concert on BBC Four on 8th September, 2017, at 9.30pm, and on BBC iPlayer until 29th  September 2017. The Last Night of The Proms will be broadcast live on 9th September. 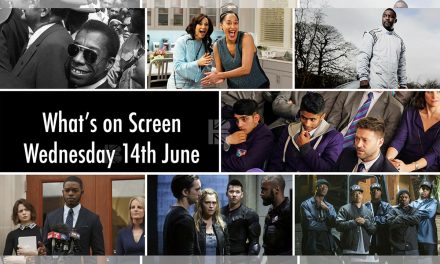 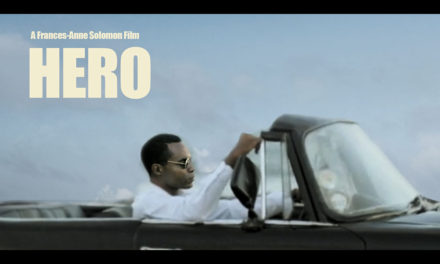 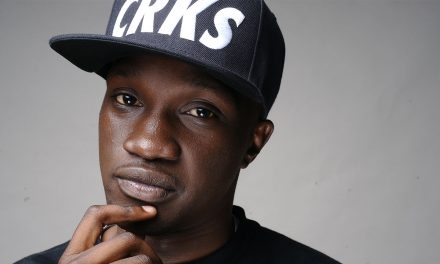