South London native, Eneeks’ birthplace continues to inspire his music today. growing up as the youngest of 4 brothers in a Caribbean household, the sounds of Soul, Rare Grove, and Jazz often filled his home. Introduced to Hip Hop music through his older brothers, Eneeks instantly became a fan. Deciding to put pen to paper and document his life through the art of poetry shortly after.

At school Eneeks would meet a group of friends who introduced him to MC’ing. The transition complete, the Eneeks the artist was born.

Officially breaking into the scene with Soul Selling a mixtape which declared his talents to the world. Showing off his unique work ethic and the importance of putting his heart and soul into every song he records he continued to release a series of mixtapes whilst performing and recording with a live band.

After the release of  his first live EP Dreammaker Eneeks quickly gained attention from MTV and Giles Peterson’s BBC 6 radio show. Taking us to 2016 and his new EP release My Queen, My King, My God with independent label Tokyo Dawn.

Eneeks is known as the artist who captures the truth in his word play, constantly challenging the listener to take in every aspect of his complex thoughts. Through his music Eneeks continues to make waves in the underground scene of New Soul Hip Hop taking the listener on a journey of stories of love, loss, redemption, relationships, street life and everyday living.

After listening to his brilliant EP, TBB’s Jay Will Be caught up with Eneeks to find out a bit more about the artist and his latest project…

Your music keeps you in the ‘Conscious Artist’ camp, with My Queen, My King, My God following the same trend, which is refreshing compared to a lot of current commercial music, what inspired you to go in this direction?

Thank you! What first inspired me, began with me being a fan of the art and culture. My soulful direction started when I began to embrace myself; which can at times, be the hardest thing to do as an artist. But after a lot of soul searching and supportive people around me I became very confident in my own style of music.

Regardless of what the commercial industry has been playing, I have always been this type of introspective, reflective, poetic person so making this type of music has become second nature to me. In my own naivety I just thought people didn’t want to listen. After my last EP Dreammaker and the reception it received, I realised that there was a place for my music that I love to make. When labeled with the term ‘Conscious Rapper’ people get the idea that you always rap about certain things which can get predictable and boring, I like to think that my music is about life in general with its ups and downs. So I try to take inspiration from this when writing my songs. I still see myself growing as an artist, so who knows what my next project will be like. I just know when I put my heart and soul into music people will connect with it on whatever level they can.

When creating these songs I asked myself, if I heard this on the radio would I change the channel or keep listening, ’cause as an artist all you really want to do is connect with people through your art even though it may not be the most commercial route. With this transparent approach it allowed my passion and lyrics to be in balance with the beats and melodies. This is the best way for me to grow as a true artist making real music.

The E.Ps sound is an eclectic mix of soul, which perfectly compliments your lyrics, tell us a little bit about the minds behind the production? 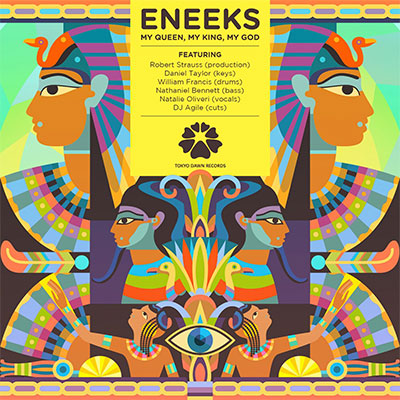 I wrote the songs and first came up with the ideas of how it will all sound, but production wise this was a collaborated effort as I worked with a band of exceptional musicians and an amazing producer Robert Strauss. Initially we had two days to record everything so the energy level was always high and full of vibes. I started to build the music with Daniel Taylor, who was also on keys and then he introduced me to a brilliant singer Natalie Oliveri for singing vocals. Nathaniel Bennet was on bass and William Francis was on drums, all of the members I mentioned are friends and have worked with each other from previous gigs and music projects so the process was very organic. We then linked up with DJ Agile later on down the line to add the cuts and scratches in the mix. The recording process for the EP to say the least was a special experience and everyone knew we had something great on our hands.

What is the meaning of the EPs title and what space were you in whilst creating it?

My Queen, My King My God initially relates to the ancient African holy trinity, the circle of life and the seed of all creation. The running theme throughout the EP is the cycle of my life and how I relate to it as a person and an artist. Since first writing these lyrics I was thinking about what title I should give my new EP. I kept on asking myself what do all the songs I created have in common. I then realised the tracks all relate to me finding myself. This journey was first encouraged and inspired by my parents (My Queen, My King) to go find myself, and at that point I found my passion which to me is true enlightenment, creation and ultimately God (My God). The idea initially came to me when I was just listening to my Mum and Dad randomly having a conversation about life growing up in the Caribbean.

What are your favourite tracks from the EP?

That is a hard one! At different times of the day I may have a favourite track but it really depends on my mood. I know emotionally My God has always struck a chord with me; especially in the way it was originally recorded. I remember when we finished playing the song how everyone in the studio felt about the magic created. Good Feeling was also an emotional track, while songs like Pillow Talk, Going In and How Many are very insightful, full of vibes and witty, but what is undeniable and always gets me motivated is ‘Get Up’.

Who would you say are your musical influences?

My influences are all over the place, but I can say that Marvin Gaye, Curtis Mayfield, James Brown, Otis Reading, Earth Wind & Fire, Nina Simone are defiantly influences from the old school. Currently I would say Kendrick Lamar, Robert Glasper, J. Cole, Common, Tupac, Tribe Called Quest, Outkast and Terrace Martin to name a few, but let me stop there cause I can go on for days.

Commercially, Grime is really taking off, which is good news for a lot of UK based artists. However, what impact do you think this will have on artists such as yourself?

I think it’s such a big thing what Grime has done for the UK music scene. The irony of how Grime is now commercial makes me smile. These guys made their own culture irrespective of what the industry was playing and promoting. The movement became so big it couldn’t be ignored, the UK and the rest of the world had to embrace it. If anything can be learnt from this is that it’s so important to have a thriving culture behind the music you are involved in as an artist. This digital age allows the artist to connect straight with the listeners cutting out all the red tape, but the culture, which people invest in, allows the music to breathe and evolve. This type of movement is contagious ’cause people are not waiting to be accepted by the mainstream.

This of course results with you as a listener having to sift through a lot more music some good; some bad, but at the same time we have to take a look at the variety of rappers, MC’s singers and general artists the UK has now been exposed to. This wasn’t the case a couple years ago, so I feel that any movement that creates a platform for artists is a good one. At certain times these cultural movements will organically feed into the music scene that I am currently a part of. There are a growing number of artists and musicians based in the UK feeding into this Neo Wave sound. Live jam sessions, club nights, events and open mic nights which cater to this scene have been happening for a while now in London and around the UK so let’s just see what happens next. I’m just excited to be a part of it. 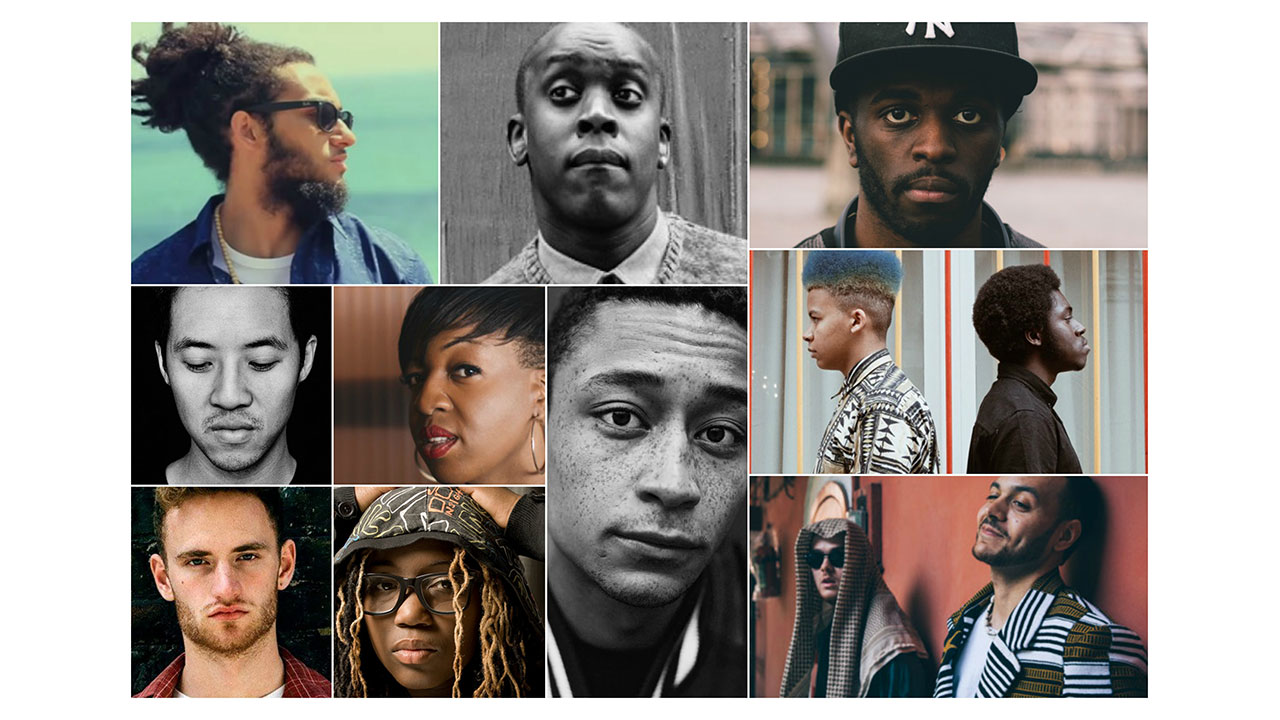 Who from the UK music scene was on your radar in 2016; is there anyone else you admire (from anywhere) you think we should look out for this year?

In the UK music scene my radar is forever expanding, there are so many artists coming out, it’s hard to keep up at times. I mostly admire Omar, who has always been consistently legendary in UK music. I love music coming from new UK artists such as Blue Lab Beats, Yussef & Kamaal, Ben Lewis and Tom Misch. These guys are great musicians, and I feel that this year they will make a lot of waves in the music scene. I also like listening to Eric Lau and Alfa Mist who are amazing producers. Singers such as Tawiah and Emmavie and rappers 4i, Barney Artist, and Loyle Carner are all very talented UK artists that people need to look out for this year.

If you could work alongside any other artist and collaborate with them, who would you choose and why?

That’s a crazy question; I could be thinking about this for days. I would say off the top of my head Stevie Wonder mainly because he is timeless and anything he touches becomes an instant classic.

What’s next for Eneeks? How can we look out for your upcoming music/performances?

At the moment I’m working with my label promoting the EP. I’m still confirming dates for this year regarding performances and gigs so please watch this space and check my website Eneeks.com for further details. We are also working on the ‘Good Feeling’ and ‘Get Up’ videos and some new material wink wink. Please stay tuned, it’s going to be an amazing year!

Sample Eneek’s My Queen, My King, My God here.