Being on set is a fascinating experience. So we jumped at the chance to do just that for episode 1 of the forthcoming online UK superhero series The Few. Brainchild of independent creative team Sam Benjamin and Sam Bradford, The Few was borne out of a mutual love of science fiction and a lament for the lack of available on screen superhero stories set in the UK.

Influenced by Unbreakable Watchmen (2009), Chronicle (2012), and… err… Batman V Superman (2016), in 6 episodes,  3-4 minutes long and in standard TV format The Few is an action adventure which promises to be gritty in a way that hasn’t been seen before. 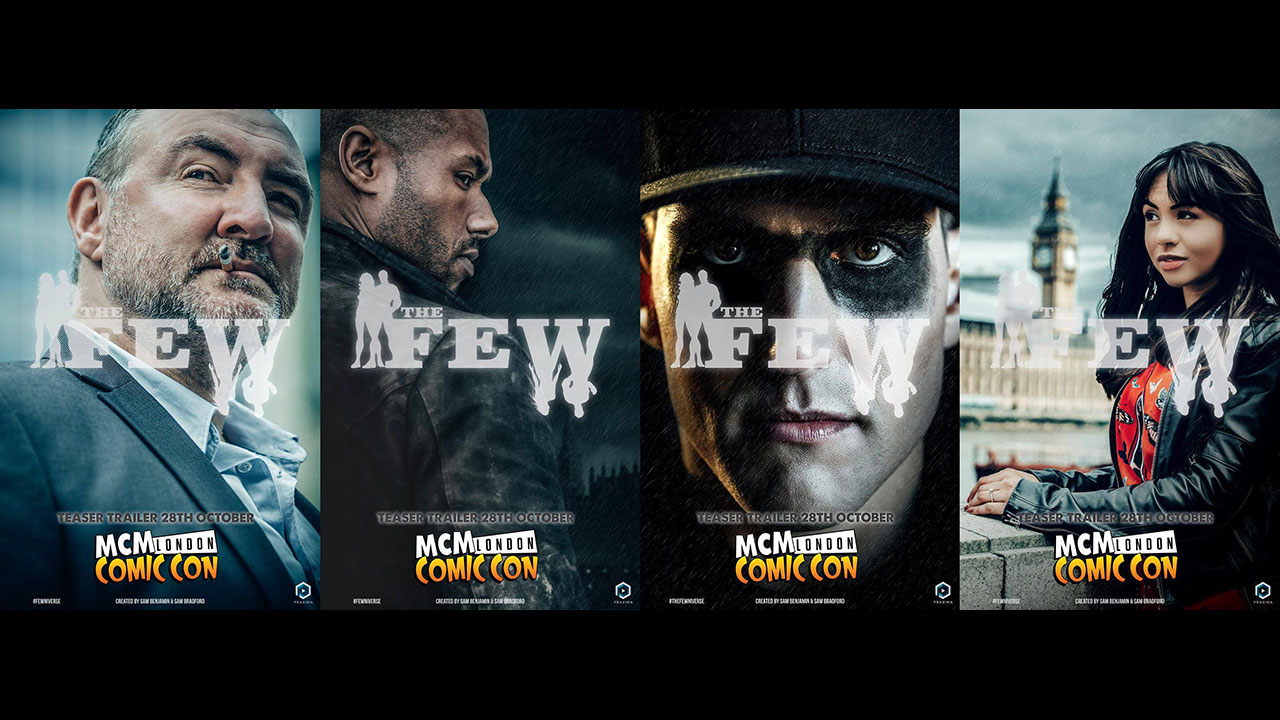 The Few follows three clinical trial volunteers – a jaded soldier, a history graduate crippled with loan debt, and a troubled ex-convict who’s doing her best to stay on the straight and narrow – all desperately in need of the promised financial boost, who join a British government sponsored secret scientific study nicknamed the ‘Three Lions Programme’.  Designed to eradicate the danger of emerging super bug resistance to antibiotics by augmenting natural human physiology, when initial results yield zero response from all three the programme is dropped. The Few picks up one year later, as the three test subjects begin to discover that they have gained special abilities. With the whereabouts of 2 ‘Lions’ known, a rogue detective decides to go on the hunt to unearth the third, fearful for disastrous consequences for the nation, and the world.

One of the unique aspects of The Fewniverse (a brilliant catchphrase coined by Bradford) is actress Jacqui Lee-Pryce, a strong woman of African heritage cast as the British Prime Minister! A beautiful black woman is the big boss in this modern, definitive superhero Britain!

Now, think about this… UK television has broadcast over 70 science fiction titles since 1938*, surprisingly few have ever had a Prime Ministerial character, or even got as far as featuring a female PM. MI High had 3 Prime Ministers – all men. But ever the ground-breaker, Dr Who did – twice! In Terror of the Zygons, in the time of the 4th Doctor (Tom Baker), the Brigadier referred to ‘Madam’ when taking a call from the PM. Then, in the time of the 10th Doctor (David Tennant), Dame Penelope Wilton played Harriet Jones – an MP for Flydale North and a faithful back bencher. But by the end of these events she became PM and appeared in several other episodes over 2005-06. So whilst these are iconic British sci fi series’, only Misfits can really claim to have created anything resembling a superhero universe with an engaged political leader.

Sam Benjamin said, “When Sam Bradford and I created The Few, we set a target to have the characters being at least 50% female, and 50% BAME. With that, I thought, why not make my Prime Minister a black woman? After all, seeing is believing!”

I had a brief chat with Jacqui-Lee Pryce, a gorgeous actress, whose skills are noted as dancing, driving, singing, sport. Originally from Lincoln in Nottingham, Pryce moved to London 20 years ago. She met Sam Benjamin when he cast her as female lead in a re-do of his play, Black Music Cab. They’ve remained friends ever since.  I found her in make up with Grace Sargeant, preparing to play PM Rita Murphy.

Have you ever played a Prime Minister before, Jacqui, and in a mini-epic sci fi, no less? The character profile reads ’40-ish, African heritage, strong, presence’. How did you feel about being asked to play a role like that?

No, I’m usually the other side of the coin. I’m usually the superhero – hitting, kicking. Prime Minister aside, it’s something I’ve never been cast as, or even probably seen for. People look at your physicality – I’m 6 foot 2, and they look at the skills I have, which are boxing, kick-boxing, Muay Thai [martial art] and stuff. So they set you in that little box. Of course, as an actor, you can do more than those things. On stage, I’ve had a variety of different roles. But, not-so-much on screen. When he said Prime Minister, I thought that’s gonna be a great opportunity for me to show a different side to my work. Plus, we’ve landed in the middle of some fantastic stuff that’s going on in Parliament.

Even when I was researching MPs, there were hardly any in this country, just to put this in perspective. So it’s quite a huge thing! I’ve known Sam Benjamin since 2010. I actually really trust [him] and admire a lot of the stuff that he’s doing, because he really is proactive. He’s a great writer, and he doesn’t do diverse casting for effect. He’s very aware of how difficult it is for minorities to be cast in these particular roles. You asked me if I’ve ever played a Prime Minister before. Well, it’s just not normally in my casting call sheet… Interestingly enough, I hadn’t read the script when Sam asked me to be a part of this… I just said yes! He asked if I’d read it yet, but I just knew it was gonna be a decent piece of work if he was attached to it!

So at this point, you know that some intervention has produced these beings. You’re the country’s leader… as you’ve been working to develop the character, what sort of discussions have you had?

I’ve done a lot of background research on what MPs do, what a prime minister does, how you would go from being an MP into a PM role, the different levels within Parliament, MI5. Then, I really started to look into my relationship with Armstrong [my head of MI5], how we’ve developed and come to this point… 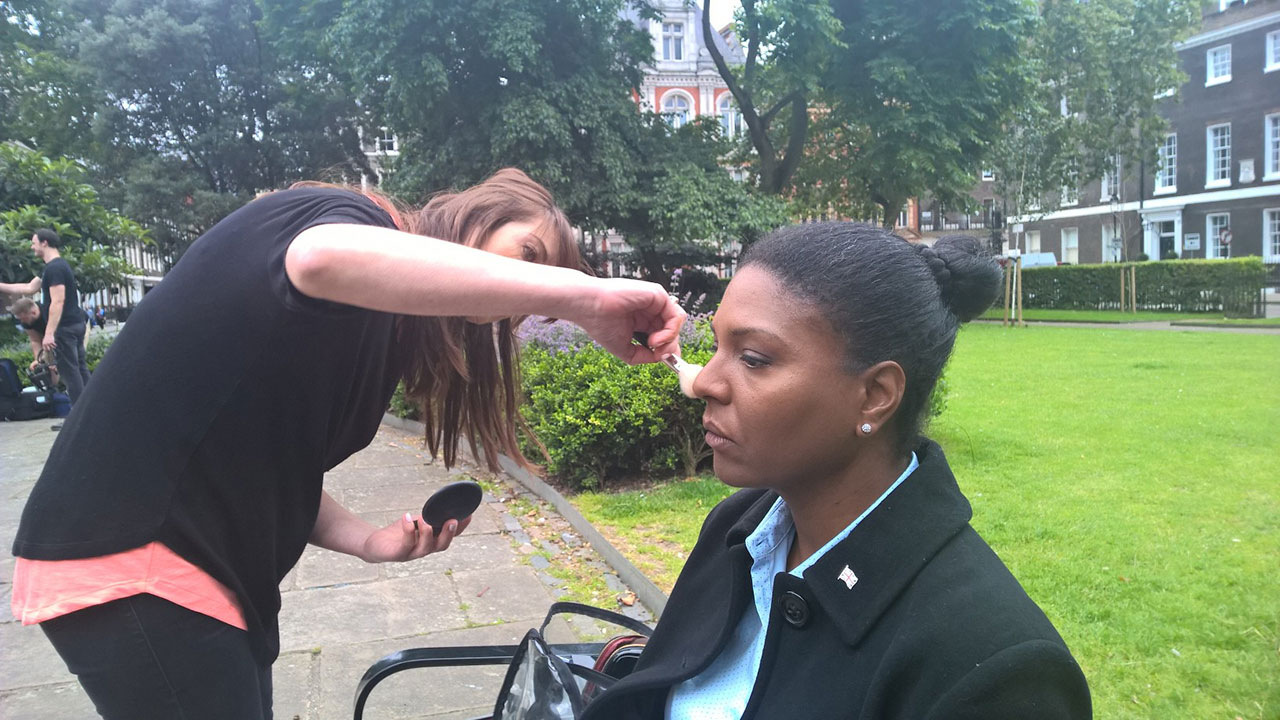 Make up artist Sargeant needs Lee-Pryce to move, so she can blend, blend, blend. I’m impressed that the loving the fact that the foundation seems to be perfectly colour-matched…

It’s mine. It’s MAC. As an actor, you [can] get discounts. But I find that I just kind of travel with it. It wasn’t even a thing that we asked about 20 years ago when you couldn’t get the colours. But I don’t understand it now! I find it rude, actually. Lack of cosmetics and hair-styling products was something Naomi Campbell had to deal with and speak out about early on in her career. The argument is, or has been, there’s not that many people of colour in the film industry. I don’t really want to hear that! If I was in a role and I didn’t know something, or didn’t have experience, I’d go and get the experience. I’d go and do a course! I’ve just done something where I’ve had to learn several different skills for it. The resources are out there so it does become slightly tiring, even to the point where I’ve thought, I might go and do a makeup course myself! I shouldn’t have to do that!

Sargeant says that when she went to makeup school, she didn’t think they had models with the necessary variety of skin tones at all.

That’s where the problem starts! I worked with a makeup artist recently, who happened to be black, who could do both! It should just be standard! Hair is possibly different.

Thank you. It’s natural, I’ve just pressed it. Even Afro-Caribbean hairdressers only train in European hair! I’ve been told that they have to go and learn the ‘other stuff’ themselves! OK, that’s fair enough, but they still have to learn it because otherwise, they’re gonna limit themselves. Why should that not be all hairdressers and all makeup artists? That’s the only thing that I have a difficulty understanding. Surely you would get employed more!

I have to let Lee-Pryce go to speak with the crew, but I am excited at the prospect that The Few could be setting a precedent we are likely to see again. After all, there have been around 7 fictional black presidents! With Bradford and Benjamin at the helm, it’s not surprising that they are breaking the mould. Benjamin said,

“You’ll see that one of the characters in particular is theorising about what is the place of Great Britain, and that is something that is very topical now. It’s something that I think about a lot. I studied history, law and politics [and] I think about the chequered past of this country and the identity of this country, especially recently. It’s such a fascinating thing. What are we? What is Britain now and what is its role? We’ve bullied the rest of the world for centuries, London seems to represent that because it’s so multi-cultural, like a world city. There’s so much iconic imagery, with all this heritage, a fascinating dynamic.”

There are so many things about this story that I like – the stunning black female PM, the pharmaceutical angle – a more modern, more relatable origin story than the traditional radiation/lab experiment gone wrong/accident. Pharmaceutical lab stories have been topical and in the news in the last few years. The protagonists are flawed, but not derivative in them. Last week at the MCM London Comic Con, the first teaser trailer was released on the MCM Buzz Magazine Stage! We are incredibly excited for The Sams, for Lee-Pryce and the rest of the cast.

The production quality is of an incredibly high standard. Check out the trailer

We will bring you the rest of our on-set conversations closer to the series release in 2017!