Graphic novels are books predominantly crafted in the renowned ‘comic book’ style. Although the word “novel” normally refers to long fictional works, the term “graphic novel” is applied broadly and includes fiction, non-fiction, and anthologised work. It is distinguished from the term “comic book”, which is used for comic periodicals.

Fan historian Richard Kyle coined the term “graphic novel” in an essay in the November 1964 issue of the comics fanzine Capa-Alpha. The term gained popularity in the comics community after the publication of Will Eisner’s A Contract with God (1978) and the start of Marvel’s Graphic Novel line (1982). It became familiar to the public in the late 1980s after the commercial successes of the first volume of Art Spiegelman’s Maus in 1986, the collected editions of Frank Miller’s The Dark Knight Returns in 1986 and Alan Moore and Dave Gibbons’ Watchmen in 1987.

The Book Industry Study Group began using “graphic novel” as a category in book stores in 2001. Bobby Joseph is one of the main players in British independent comic books, and featured heavily in the 2014 exhibition at the British Library. He previously published British satirical comic book, Skank, which ran from 1993 to 1997. Billing itself as a black Viz it was shut down after a legal threat from British athlete Linford Christie.

Skank featured a strip called, Scotland Yardie which was about a Jamaican drug-using aggressive black policeman. Now Bobby Joseph has written – and Joseph Samuels has drawn – a full colour original graphic novel featuring which fully focuses on Scotland Yardie which will be published in January 2017 via Knockabout Comics.

Citing institutionalised racism being at ‘an all-time high’, the Metropolitan Police embark on their annual drive to recruit more ethnically diverse people into the police force. With little or no success, they proceed to enlist Jamaica’s most-feared policeman — Scotland Yardie, a marijuana smoking, no-nonsense bad boy cop who breaks the rules to enforce his own harsh sense of justice. But what happens when cultures clash? Can the average criminal handle the street-wise Jamaican Lethal Weapon? Will south London ever be the same again?

Bobby welcome to TBB. Did you have a decent Christmas break?

It was a relaxed event. I just ate and got fat; which to me is a brilliant Christmas. I also got two swanky coats! Happy fi real!

Let’s get straight into your graphic novel Scotland Yardie. Is this a breakthrough for black British literature?

Is it a breakthrough? Scotland Yardie is something that has never been done before. It is the first graphic novel in the UK that deals with racism from the police, PR companies looking at black people as politically correct window dressing and the gentrification of Brixton – all done through the lens of satire. So yeah, maybe it is a breakthrough…

Did you always intend to construct a colourful, attention-grabbing anti-hero of a lead character?

Scotland Yardie was initially, created in Skank Magazine over 20 years ago. So yes. Everything we did in Skank was to cause attention. Scotland Yardie was a very two-dimensional character back then – there wasn’t much depth to the comic strips that were produced at the time. So when I revisited the character twenty odd years later with the artist Joseph Samuels, I made sure the character was more nuanced and reflective of the society we live in.

It was a very simple idea. A black officer from Jamaica comes over to show the UK cops how to do their jobs properly. The story then escalates into a Black Lethal Weapon rolling through Saaf London, taking out the bad guys! Along the way, the graphic novel tackles police brutality and the institutionalised racism prevalent in modern UK society.

I’ve been writing since 1994. I’ve written for The Voice newspaper, New Nation, Loaded Magazine, The Guardian, BBC1’s Lenny Henry in Pieces and Radio 4. There’s loads of other stuff that I can’t remember – my memory’s hazy! All I can safely say is that I’ve been there. I’ve done that.

How would you describe the process of getting this graphic novel published in the UK?

I’ve been writing comics since I was a teenager. So it’s taken roughly twenty-three years to get my first graphic novel published. It’s been a long journey; I’ve had my low-points. I’ve had my high-points. That said, I smile every time I flick through a copy of Scotland Yardie.

Was the journey worth it? 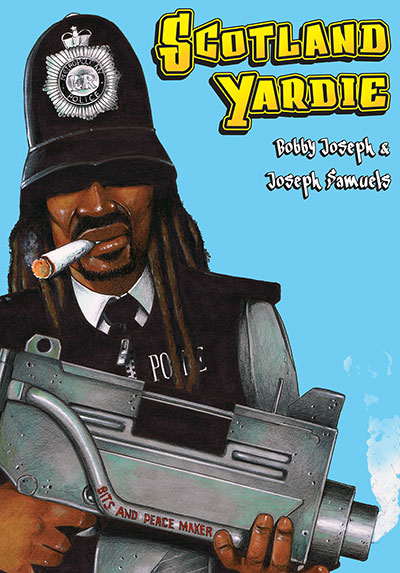 Damn skippy. I am happy.

What do you believe is uniquely special about the graphic novel as a form of literary expression?

It is an accessible vehicle to tell mature, funny, brilliant stories with pictures.

Do you feel there are enough literary role models for black British youngsters who love writing stories and drawing comics?

Not really. However, things are changing in the comic book field. The flag of diversity has finally been waved by the American comic book publishers, which is proliferating in other mediums too. There is a shift. We have a lot more black characters being pushed forward. My son religiously reads the Miles Morales Spider-man comics – as he could relate to Spiderman being a black kid. We can see Luke Cage on Netflix. We have Black Captain America. The Black Panther movie is coming. That said, I would like to see a lot more black female characters – written and drawn by black women. I see Roxane Gay is writing World of Wakanda for Marvel comics, which is great (and about time too). More black female comic people please!

Who else has been instrumental in the creation of this publication?

Joseph Samuels is my talented co-collaborator on this book. He is the artist that translated my ridiculously detailed scripts into a visual feast for the readers. Secondly, Knockabout Comics. Without them believing in my mad ramblings, then there wouldn’t be a book. Thirdly, Dotun Adebayo. Without Dotun, there wouldn’t be any of this. He gave me a start in this industry. He published Skank and started me on this road and I am eternally grateful to that man. Major props to all three!

Scotland Yardie will be available nationwide in all good bookshops from January 12th, 2017. You can also get a copy here