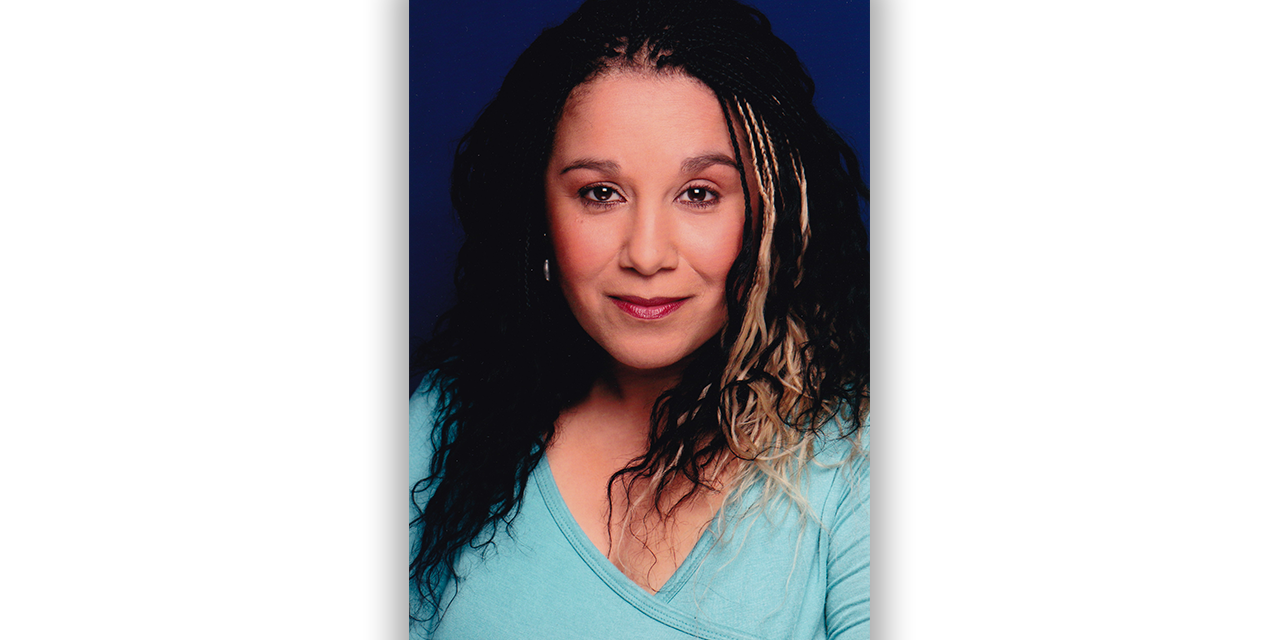 The British Blacklist caught up with Nicola Blackman, one of six female actresses starring in ‘Shutters’, directed by Jack Thorpe Baker.

We get to find out more about Nicola’s experience, her career, and just what intrigues her about the ‘umbrella’ of plays revelling in the journey of women from three different outlooks.

You are starring in Shutters?

There are six fabulous [females] and not because I’m in the cast, but it really is an incredibly talented company. I may be the only black person though [laughs]. No, but it really is an ensemble piece, because each play, we all get a really nice role. But it’s not like you get nothing in one play and loads in another. It is very evenly distributed.

Could you tell us a little more about it?

Yes, the umbrella name is Shutters and it’s three plays – Cast of Characters, Trifles, and The Deer. Trifles was written in 1916, by Susan Glaspell and it was an early feminist play about murder, based on a true story. Glaspell was a reporter and what happened was the woman was jailed then released after a year because of insufficient evidence. It was a pretty horrific murder; the actual man was axed to death. After that, Glaspell decided that she wanted to write, rather than being a journalist. She’s changed a few things by showing how women are better at looking at the minutiae. Trifles got its name from men saying [in an American accent] ‘oh you women, you go an’ talk about your trifles and we’ll be doing the man’s job…’
Cast of Characters is about a family, but it’s not conventional at all. I can’t really tell you much because it will ruin the joke, but it is a different way of presenting a play. The Deer is my favourite. It’s very metaphysical, it’s beautiful and a very good story about a brother and sister, their relationship, seen through the eyes of a deer. The play has actually entitled The Deer and Pie because the brother and sister love eating pie. The plays are separate but are linked because they are about people’s lives just presented in different ways. The great thing is that we play all the men’s parts and it works very well.

Could you tell us more about your character(s)?

The great thing about Jack Thorpe Baker (director) – colour-blind casting. When you see the plays, technically they would be white, except for the last character in The Deer; it could be played by anybody. My first character, I’m in a family. Three sisters from Texas and they are (written) white. Trifles features a white character, but Jack decided no!

In regards to your character(s), what process of development did you go through?

First of all, the accent! The first one is Texan, the second one is general/middle American, going towards Nebraska and the third one is Wisconsin. We got a lovely guy called Simon Money (voice coach) who came in and went through the different accents. It’s the subtle differences in general American. For example, if you say something like shutter you would pronounce the ‘r’. With the southern, you have a slight dip, but for Texan, it’s not quite as much as that, it’s a little bit sing-songey, but it’s not Deep South. Whereas my third accent, where I’m playing a black Southerner, I drop all the ‘r’s. She’s called Winnie and I absolutely adore her, she’s completely bonkers.

Cast of Characters is about 30 minutes, Trifles is about 25 minutes and The Deer is about 40 minutes. Luckily there will be a 10-minute interval between each one, so I need to just get rid of the first one accent and onto the second one, then onto the third. It has been a bit of a nightmare learning it, Cast of Characters particularly, because it’s a different way of doing things, there’s no hooks, lots of non-sequiturs and it’s very difficult to get a hook to think ‘what’s my next line?’ But it’s not bad.

Have you been able to relate to your characters, if at all?

Not really, but my first character, I’ve sort of based a few things around my sister-in-law, who is disabled. There are certain things about her that I’ve been able to grasp, but I can’t say anymore because it will just ruin the story.

How the relationships with the all-female cast?

Except for Jack, it’s an all-female team. Our stage management is female, the assistant director is female… We all get on very well. It’s a range in age; I’m the oldest in the company and I think the youngest is about 26. It’s been a lovely collaborative process. 4 o’clock is cake time. We go through cakes, donuts. I’m diabetic, of course, I’m terrible for cakes. We’ve been rehearsing at Diorama, which is lovely. It’s got a kitchen; my only gripe is that it doesn’t have windows, but here (Park Theatre) is lovely, but we don’t have the facilities, we can’t make cups of coffee, because it’s a separate entity.

Have there been any challenges during production?

No, I think a lot of it has just been working it out. The first play, (we’ve been) trying to get a hook on how to do it. We have gone through lots of different processes because it‘s not a conventional play as such. So we’ve had our thinking caps on in terms of how we are going to present it, because it is tricky. As soon as it starts you’ll go ‘oh! That’s not what I was expecting’.

What stood out for you in Shutters that made you decide to choose it?

It was Trifles because that’s what we auditioned with. I read it and thought this is a really nice play. Also, Jack is hot! He’s just finished doing Ace of Clubs. It’s funny because his aunt Matilda Thorpe is in the play. A real showbiz family. It’s lovely because he comes from a dance background. He was with Joffrey Ballet and his vision is fantastic. He lets us get on with the actual doing, but he’s very particular. In particular The Deer, he’s got such a great eye and he can just see how things are!

I know! I’m one of these actresses… I’ll probably never be a big star, but I can actually put my hand on my heart and say I’ve worked for 40 odd years. In this business and as a black actor, I’ve been very lucky. I’ve had to go to America and I have to say as soon as I hit the other side of the Atlantic, I suddenly became a classical actress because of my accent but it’s interesting, there are a lot more opportunities in New York and I’ve noticed that all my brothers and sisters are all going out there because you’re treated so much better. Especially if you’ve been to a good drama school in this country, it’s great for the States.

What have you learned from this production?

At the moment, it is actually being able to switch quickly with three different characters, three different things. We haven’t got the luxury to take a day and focus on one particular thing. It’s literally 10 minutes to get yourself from one play to another to another. I’ve never done a three in one performance, so it is a new experience. I know it sounds a bit wanky but you do have to clear your head and concentrate on the next one. It is a discipline that I have not gone through before.

What pushed you into becoming an actor?

A complete fluke. I was at school with Princess Anne. I went to a very poncey school called Benenden. I was lucky because my father played cricket for Barbados and West Indies, so he first came over to the UK in the 1950s. My mother was an accountant, but she came from quite a poor family in Northern Ireland, but she was absolutely brilliant with figures and got a scholarship from Belfast to come to Britain and study. She became an accountant and met my father in Harrods! My father just sailed through life, great big personality, [whilst] my mother had to bear the brunt of being a white woman, married to a black man in the 50s. Both my parents had been married before, but my mother had to take her eldest son and pretend to be a couple with him because they wouldn’t sell (property) to, ‘darkies‘.

I had been at the Royal Ballet School and got chucked out, because I was never going to be the right shape for ballet dancing and I remember my mother saying to me ‘Nicola, you have to be 3 times as good as anybody to be equal, always remember that!’. So it made me very determined. I was at school and during half-term, I had been doing dancing and drama classes, and I was going to see Showboat with Cleo Laine at the Adelphi. At the back of the stage was an audition and it said ‘black chorister wanted’. I turn up at the Adelphi Theatre, I walk on the stage, sing Summertime and they offer me the job! I’m 15! I thought I would be able to do this show and still be at school. My father was furious. Then he realised I was going to earn £30 p/w and said I could do this show, but once it was finished I had to go back to school or learn how to do this properly. So I ended up at Guildhall, well snuck in as I was too young. That was 43 years ago and I have worked ever since. So it was a complete fluke because I wanted to be a barrister that was my aim and I have never played a barrister, I’m gutted.

What is your advice to aspiring actors?

I would go with good training. I would train and also try and work as quickly as you can, because you get the basics, but you never stop learning. When you are actually doing a job, you learn an awful lot more. I would also say have the passion. Don’t think that you are coming in to be famous, because it may not happen. Be prepared to do anything, if you are an actor, act. It doesn’t matter if you are performing to three people, but you are actually applying your trade. It’s best to get your training because once you know the basics, you can do lots of other things.

I have no idea. I’m growing my hair. The last play I did, which was about black women’s hair called Snakes and Ladders, I had to take all my hair off and it’s just growing back now. But I was completely and utterly bald.

Shutters is now on at the Park Theatre in Finsbury Park, London until 3rd August 2014 Find out more here. 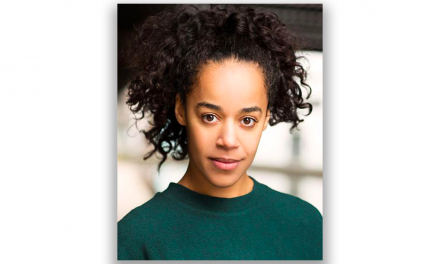 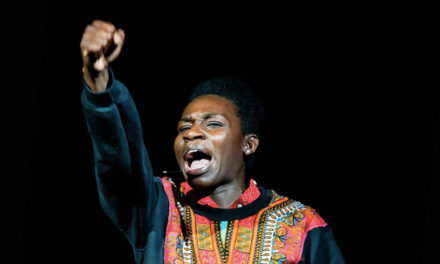 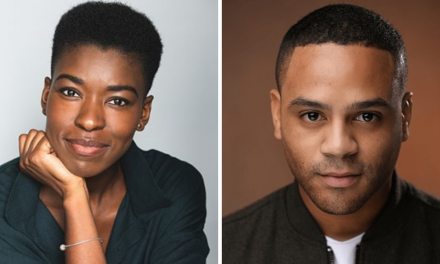 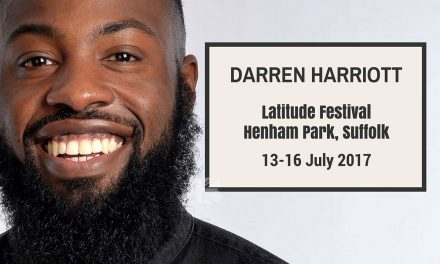