I Am Not a Witch is not only showing at the 2017 BFI London Film Festival, but was lately selected for prestigious Toronto, and premiered earlier this year in Cannes Director’s Fortnight. Add to that, the young Wales-based Zambian-Brit film maker Rungano Nyoni’s shortlist for the £50K IWC Schaffhausen / BFI Film Maker’s Bursary award, and the buzz around this, her first feature, plus the full house at LFF Picturehouse Central screen 2, was understandable.

A small, silent girl with big eyes (Margaret Mulubwa) suddenly appears in a small rural Zambian village. Life is hard, made worse by a prolonged drought. Then, weird incidents begin to occur, like the man who dreamed that the child stood staring at him as he ploughed his field, only to have his arm suddenly fall off; or the woman who suddenly trips on the uneven, stony road and spills her water, as the child again looks on. The ‘tormented’  villagers eventually come together behind the thirsty (and possibly unwashed) woman to accuse the little girl of being a witch.

The local constable, Officer Josephine (Nellie Munamonga), listens sceptically, until it is time to question the child. Met only with silence from the child, Josephine contacts local high-ranking civil servant Mr. Banda (Henry B. J. Phiri), who is tasked with dealing with such problems in connection with local tourism. He brings in a ‘real’ Witch Doctor, who proclaims the girl a witch.

Banda takes her to a local Witch Camp, a coven who travel the countryside performing menial tasks and manual labour for gin and other ‘offerings’. There, she must be forever bound by a yards-long white ribbon (to prevent flying), or cut the ribbon and become a goat. For the first time, we hear the child speak, declaring herself to be a witch to join the 27-strong sisterhood of middle-aged and older women. She gains a name, given her by ‘Grandma’ – the elder of the group. She becomes the tragic Shula, meaning ‘uprooted‘. Thus, Shula’s nomadic life begins, carried along on the back of a flatbed truck. The coven grows fond and protective of her, whilst ‘modern man’ Banda recruits his wife’s help, and seizes the opportunity to make money and boost his tourism responsibilities.

Variously described as ‘satirical fairytale’, folk tale and ‘straight-faced satire on Zambian witchcraft’, it isn’t really clear what Nyoni’s intent was for her feature debut. With the first act scored with Vivaldi and later with folk music and Franz Schubert, there is certainly a dream-like quality as Shula’s past remains a mystery, and her future uncertain. The only means to reference the story within a time period comes from the smart phones with which tourists from all walks of life take pictures with and of the women as they are made to sit, staring silently, or making faces and cackling for them. With only a handful of lines in all 93 minutes, Mulubwa is utterly compelling to watch and perfectly captures the vulnerability of a child looking for a home. She was plucked from obscurity whilst playing with friends, and this is her acting debut. A beautiful child with affecting eyes that miss nothing, she comes across as the only fully realised character on screen. 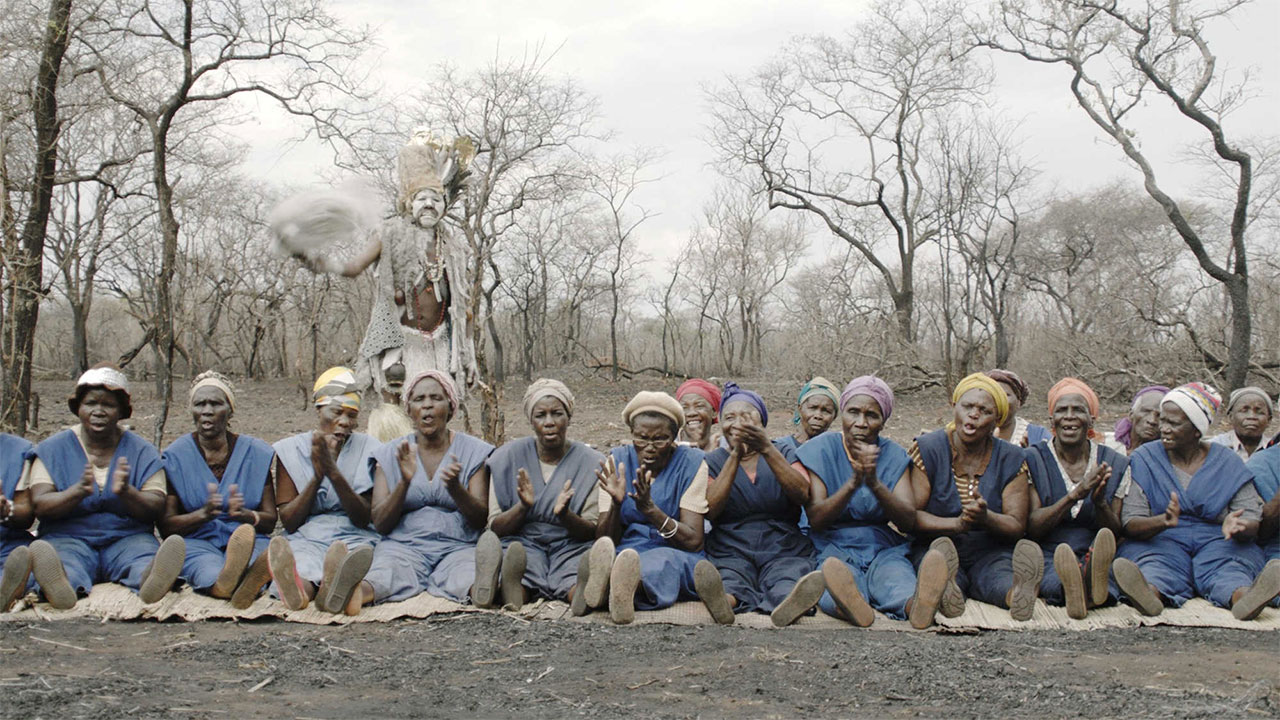 At the IWC bursary announcement, writer-director Nyoni confessed to feeling a bitter anger whilst writing the work, which sprang from attacking the specific tradition of witch camps she was faced with in Ghana. It’s not the belief that she is against, or that she questions, she has said, but that witch accusations are always aimed at older women or children. Thus, there are also claims of the film’s allegorical critique of attitudes to women. Yet, she misses several opportunities for meaningful development with several of her female characters.

For example, Officer Josephine: after a promising start, she could have become the conscience of the piece; Grandma, or any of the other ‘witches’ who take Shula into their hearts, could have shown their solidarity with Shula’s example, not by blindly following and remaining complicit, but by acknowledging their obvious understanding of the absurdity of their circumstances, the false accusations which landed them there, and by standing up as modern women. Mrs Banda, whose secret and self-interest colour her apparent kindness towards the child. Instead, and whilst claiming satire, Nyoni simultaneously allows a string of ‘coincidences’ to culminate with an inexplicable ending, which casts an odd question mark over the fate of the coven.

Then, considering the men featured in this film, they are all little more than caricatured buffoons or cruel narcissists who have not one hint of a redeeming characteristic between them.

Nyoni has said that she is inspired by locations. But, unlike the lyrical Moonlight (2016) [1], in which Barry Jenkins somehow rendered the sun-scorched, bleak Miami Projects with empathy and personality by turns, DP David Gallego’s photography in I Am Not a Witch finds very little poetry in the surrounding landscape. They do consistently hit the mark with Mulubwa’s face, however.

See I Am Not A Witch with an open mind, and try to avoid a white majority audience. Whilst there are some genuinely funny moments, in our screening with just such a majority white crowd,  the audience laughter felt more at, rather than with, the characters and story. It’s probable that it stems from Nyoni’s tendency toward a sort of cultural condescension, rather than an examination of dogma and exploitation in her homeland, not least because we’re not sure that Witch Camps actually exist outside of Ghana at all, and within Ghana the Government is taking steps to shut them down.But, you’d never know from this film’s narrative.

So, there’s a chance you may leave the cinema frustrated in your attempts at trying to unpick the filmmaker’s ultimate intention beyond the plight of young Shula.

I Am Not a Witch is screening as part of the 2017 BFI London Film Festival.