Bad Brains began as a jazz-fusion band in the late ‘70s. However, once they started incorporating elements of Punk, Heavy Metal and Reggae, they became pioneers for an intense, ferocious, visceral musical form commonly known as ‘Hardcore’.

Beginning on 24th December 1982, they played a three-night stint at New York’s CBGB. These performances were filmed, but the edited results have only just been released digitally. As part of the London Short Film Festival (LSFF), the footage was shown to an invited audience at Hackney’s Moth Club; the results were certainly eye opening. The frenetic energy from the band is extraordinary. The singer H.R. (Human Rights) seems to be channeling several spirits/demons as he screams, struts, pops, and vibrates his way through the music; guitarist Dr. Know plays every electric-guitar style known to man at spellbinding speed, volume, and intensity; drummer Earl Hudson’s stamina and technique are simply breathtaking; meanwhile, bassist Darryl Jenifer plays the hell out of his bass while seemingly keeping as far away from the madding crowd – and the cameras – as possible.

With the audience strutting, moshing, invading and stage diving throughout, the energy seeping through the screen is almost palpable, as 35-year-old spirits – and perhaps some far more ancient – are conjured and witnessed anew. This LSFF event used the Bad Brains film to kick off discussions about ‘black identity’/visibility/representation within punk and rock, and to further engage with the term ‘Black Rock’, or ‘Afro-punk’ as it is referred to today. 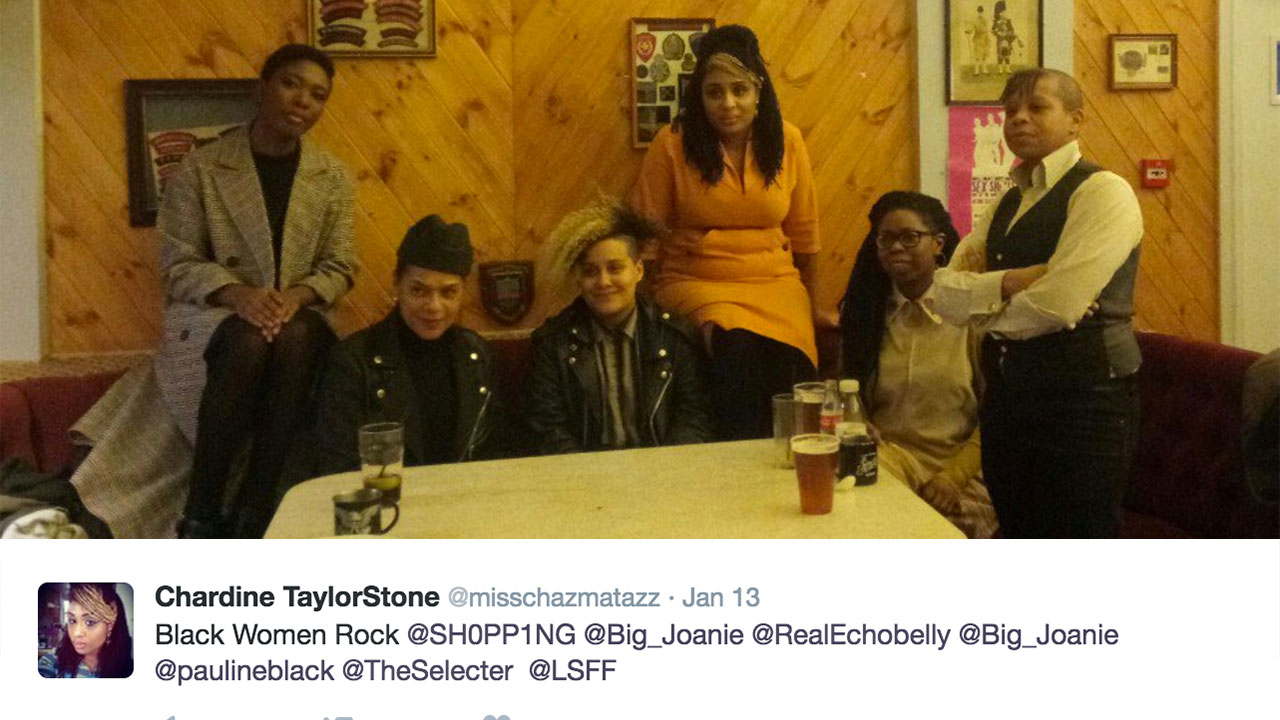 Following the screening there was a Q&A hosted by Chardine Taylor Stone (member of Big Joanie) with panelists – Black British female pioneers Pauline Black (Selector) and Debbie Smith (Echobelly, Curve, Snowpony), as well as (relative) newcomer Rachel Aggs (Shopping, Sacred paws). The discussion was polite – and occasionally forthright – but it seemed to veer confusedly from female to black representation in rock, and then to good-natured acknowledgement that – despite white appropriation – Rock is at its core, still Black.

As much as it was a pleasure to hear – and see – the ever-graceful Miss Black and the drily sardonic Miss Smith hold court, I left with the same view that I came with: once a collaborative art form is shared, it becomes open for all to take from – or add to – in any way they can (or are able to); who then gets credit/remuneration/veneration from the transaction is another story entirely.

After the Q&A came a set by Miss Taylor-Stone’s band, Big Joanie. The group look great – in a classy way – and I really wanted to engage with the implied juxtaposition between the sartorially elegant female 3-piece’s look, and their B2s-like rockabilly/punk/surfer sound; alas, after having my head blown off by Bad Brains – it all seemed a bit polite. However, I wish them all the best.

To see the full London Short Film Festival schedule of events and screenings go to their website.