Her first note will have you gasp at how living legend Audra McDonald embodies the 44-year-old, doomed Billie Holiday in this, a poignant piece of immersive musical theatre.

It’s 1959, and since her historical Carnegie Hall performance just days after her release from prison in 1948, Holiday has been playing small clubs. She has returned to Philadelphia, to Emerson’s Bar and Grill and us, a small audience, with her immaculate 3-piece band – piano (Shelton Becton) double bass (Neville Malcolm) and drums (Frankie Tontah). A vision in white, but without the famous gardenias in her hair, she walks deliberately from her dressing room, carefully navigating the lamp lit tables and late-night drinkers – cleverly transformed rows A to F of the West End’s Wyndhams Theatre by set designer Christopher Oram. She precariously climbs the steps to take to the stage, because she is far from sober and trying not to show it. She approaches the mic and there she is in that first note of I Wonder Where Our Love Has Gone – Lady Day at Emerson’s Bar & Grill! This is the first of 12 numbers, and the beginning of a transcendental experience you must not miss!

Holiday is revered for the cool, the drama and the pain she brought to old established blues hits made famous by her vocal and stylistic role models, Bessie Smith and Louis Armstrong; jazz standards like Night and Day and That Ole Devil Called Love; her many autobiographical hits, some of which she co-wrote, like God Bless The Child and Don’t Explain; and of course, 26 years before Nina Simone, the first recording of the searing social commentary Strange Fruit (1939). She was a pioneer in so many respects, famous for her on-stage banter, but also for a long history of substance abuse.

Relating episodes from her life between numbers (and drinks), we learn of what led her to music, and on, through ultimately weak or exploitative men, to drugs. You will feel Holiday’s vulnerability, her hopes, and intentions, and understand their roots in an unstable, punishing childhood and a complicated mother-daughter relationship. Always underlying every experience, good or bad, is the weight of being a 4th class citizen in segregated America. For her, this included systematic targeting by the Federal Bureau of Narcotics since at least 1939 and which ended only a few hours before her death when, having been arrested in the hospital, the handcuffs were finally released and the police guard expelled from her room.

Audra McDonald absolutely nails it, not in an impersonation, but in a resonant, emotional connection through which the accomplished actress within the magnificent “lyric soprano with low notes” perfectly channels Lady Day’s contralto. It perhaps helps that she was the same age when she first portrayed the jazz icon in this Tony award-winning, 7-month role in its Broadway run back in 2014, a year before Holiday’s 100th birthday. At “Em’s” she is funny, wistful, yearning, occasionally vicious, and ultimately tragic.

Despite Holiday’s honesty, she doesn’t seem to see alcohol as a problem, and the club owners and musicians certainly keep her ‘happy’, topped up through the night. It’s all the more poignant because this appearance is set a mere four months before she died of liver cirrhosis. 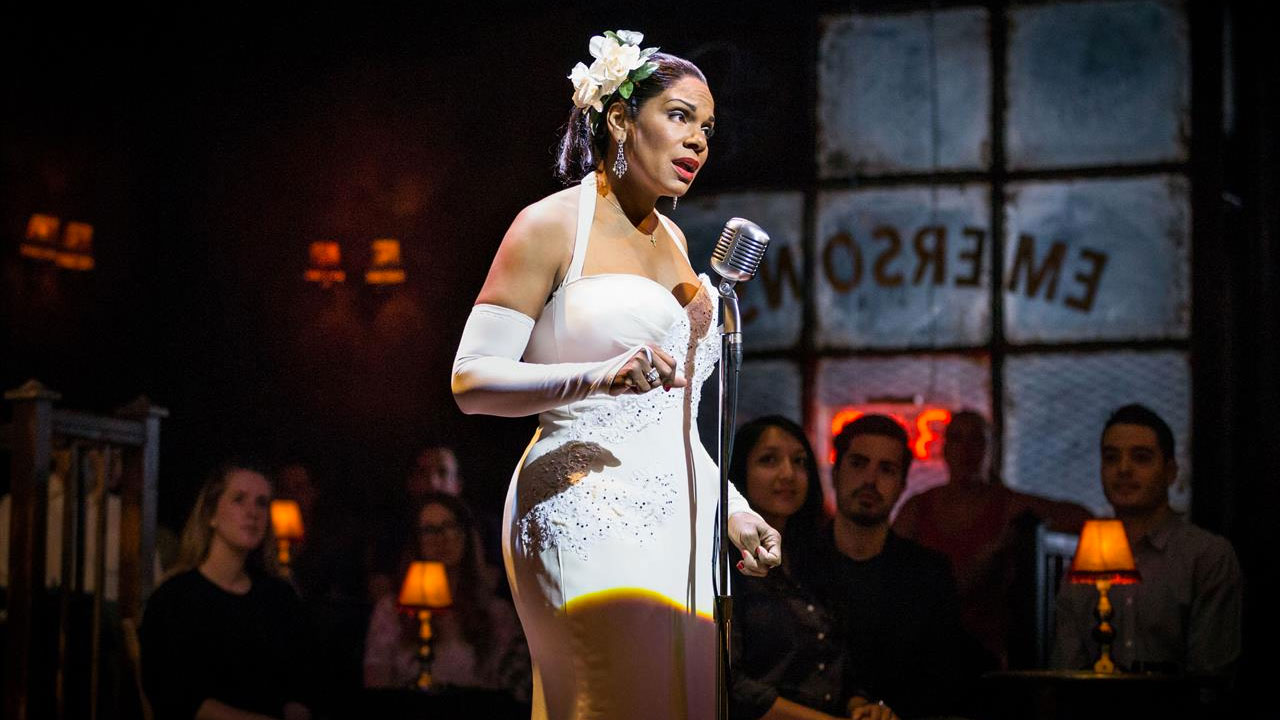 It was interesting, Madame TBB and I being in an audience that was predominantly white. Whether unwittingly or as a canny calculation on the part of playwright Lanie Robertson, it mirrored many of the audiences Holiday performed to with Count Basie, Artie Shaw and Teddy Wilson. We all laughed at her jokes. But some, which told of the inhumane treatment of African-Americans and particularly women, really only warranted a knowing chuckle or nod of the head, acknowledging the mocking wit which fuelled Holiday’s on-stage banter, rather than the full-bellied laugh they generally received.

Although Robertson is credited as the playwright, he took the setting and the night’s events from the anecdote of a friend, and used, almost word-for-word, many of the stories from Holidays’ 1956 autobiography Lady Sings The Blues. The book was ghost-written by William Dufty from conversations they shared and interviews she had previously given. Initially branded as inaccurate, it has since been confirmed as a collection of true accounts by scholarly research. This is, I think, why her warmth permeates through the heart-breaking tales and reaches out for your empathy – Robertson used her own words.

His respect for Holiday’s talent is evident. He uses the selected songs to showcase her songbook legacy, whilst Lonny Price, who reprises his direction from the 2014 Broadway hit, uses his Juilliard graduate’s classical vocal training to demonstrate Holiday’s “remarkable ear,” and “remarkable sense of time.” Her improvisational skill was hailed as being the equivalent of an instrumental jazz genius and her “understanding of lyric content” fed into her unique and arresting interpretations. She earned all such praise, despite dropping out of school by age 11 and having limited music-reading ability. McDonald encapsulates it all.

Partly because of the twilight setting of the musical and Holiday’s self-deprecation, other life achievements were down-played or missing in comparison to her vulnerabilities. Positives like being among the first black women to work with a white orchestra; being the first black female singer employed full-time to tour the segregated U.S. South with a white bandleader; winning a band battle against Tommy Dorsey and Red Norvo with Artie Shaw; and being not only the first African-American to perform at Carnegie Hall, but also to headline her own sold-out concert there in 1948, then twice more in 1956 – all the more extraordinary as she didn’t have a hit record charting at the time! McDonald’s Holiday talks fondly of her successful collaborations with trumpeter Lester “Prez” Young, and of her unhealthy relationships with a string of African-American musicians, but not of those with prominent white artists of the time, such as actor Charles Laughton, revered film director Orson Welles, circa Citizen Kane (1941), and with actress Tallulah Bankhead (of the Alabama political Bankheads). These were underplayed or omitted from the book.

Still, no matter the sad stories, her disorientation, or her unpredictability in finishing one song and starting another, you will not fail to be moved to tears as McDonald earns most praise for the simply show-stopping God Bless The Child and Strange Fruit.

This actually leads to the most glaring inaccuracy of the production. Capable of hitting a high ‘C’, and obviously keeping her own voice in tip-top condition for the better part of 20 years, McDonald, a picture of health, uncannily delivers the distinctive slightly raspy tone, tweaks and phrasing, and is note perfect… which Holiday was not at this time in her life. Her voice had grown fragile and coarse and couldn’t convey its former vitality. But, by all accounts, it never lost its distinctive edge. Personally, I accept this as a gift to the memory of Billie Holiday – an aching wish of what she could have been, whilst celebrating all that she was.

This production earned McDonald her record-breaking 6th Tony – for Carousel, Ragtime and Master Class before she was 28 and within 5 years of each other, and then for A Raisin In The Sun, and Porgy and Bess. The awards have been in all four possible categories of featured actress in a play and in a musical, and leading actress in a play and in a musical. She remains at the top of her 23-year game, having also earned two Grammys, an Emmy and multiple award nominations across music, theatre and television. Despite never having won an NAACP Image Award, she accepted America’s highest arts honour – the National Medal of Arts, in 2016, from President Obama, representing Congress.

For the personal esteem with which I hold Billie Holiday, I award McDonald 100%. For the limitations imposed on Billie Holiday’s story by the white male gaze, I award 90%. Overall, you can do the math.

Lady Day At Emerson’s Bar & Grill can, and should, be experienced at the Wyndhams Theatre, Charing Cross Road, between 17th June and 9th September, 2017, Monday to Saturday at 7.45pm and matinees on Wednesday and Saturday at 2.45pm. DON’T MISS IT! Book your tickets here.