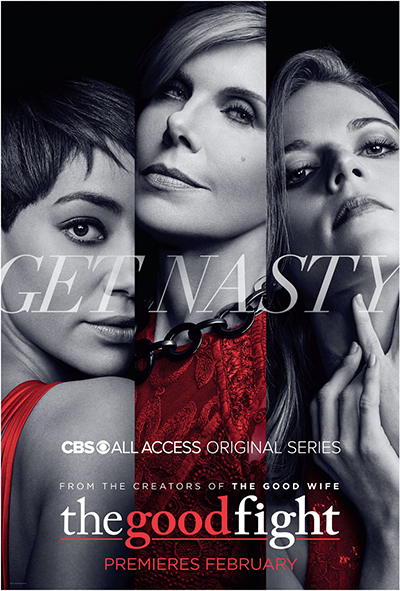 CBS has released the first teaser-trailer and poster for, The Good Fight, and the TBB verdict is… it needs more Cush Jumbo!
To a Christine Baranski (Diane Lockhart) voice over, only glimpses of Jumbo and Delroy Lindo (Clockers, Battle Creek)  can be seen in this early taster for the much-anticipated spin-off of the critically-acclaimed legal drama series, The Good Wife.

We couldn’t see Erica Tazel (Roots) anywhere either. But, the general feel is one of a suspense thriller, with its horror movie-type score.
The Good Fight will pick up one year after the events from the finale episode of The Good Wife, as Diane Lockhart joins Lucca Quinn (Jumbo) at one of Chicago’s pre-eminent law firms after being left broke following a massive financial scam, which also ruins the reputation of her goddaughter, Maia (Rose Leslie) who also follows Quinn and Lockhart.

Jumbo shares the spin-off series lead with series veteran Baranski, and, from the look of the poster, Leslie. Lindo joins as Robert Boseman, an attorney who poaches Lockhart’s associates and clients when she gets into financial trouble, which threatens her ability to stay in business.

The network also announced on Thursday that Lindo’s character “dominates every scene, intimidates every lawyer, and is beloved by every client… He needs to look like a Chicago lawyer, but have a Shakespearean facility with language.”

Come on, people, this is Delroy Lindo! He can do anything.

Tazel’s role is still unknown at this time, but she rounds out a cast that also includes Rose Leslie, Sarah Steele, Paul Guilfoyle, and Bernadette Peters. Gary Cole will reprise his role in a recurring basis as Lockhart’s husband Kurt McVeigh.

The new series will premiere on February 19th 2017, exclusively on CBS All Access, the Network’s digital subscription video on demand and live streaming service.

We’re hoping to see more of Ms Jumbo as the premiere date approaches, and we cannot wait to experience her killer wardrobe in this new chapter!