The cast of Fences dropped by Deadline’s, The Contenders to sit a panel discussion of the film yesterday… and received a standing ovation.

In 2010, Fences received 10 nominations, won Best Revival of a Play AND best actor and supporting actress for Washington and Davis playing Troy and Rose Maxson!

Playing the role of son Cory is Oxfordshire-born Jovan Adepo, best known to US audiences for his role as Michael Murphy in the HBO series, The Leftovers, attended college at Bowie State University in Maryland, having a British mum and American dad. He received his B.A. in political science and philosophy, and has attended the Actor’s studio.

The ever-awesome Mykelti Williamson has the key role as Troy’s brother Gabriel and, all but Adepo and Sidney are vets of the award-winning production. 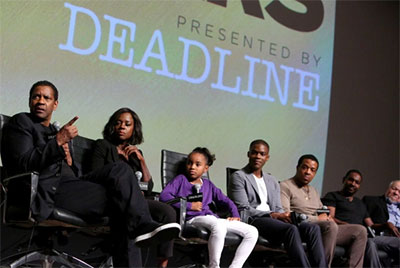 The cast reunion was a big love-in of central cast members, as they discussed adapting a work that most of the cast already was already familiar with. This, in itself, is such a joyous sight to behold, our appetites having already been whetted by the sight of the then-confirmed cast of Marvel’s, Black Panther at San Diego Comic Con during the summer.

Davis said, “I always say that you always have to come from a point of honesty, whether you’re doing it on stage or on screen… One of the things Denzel said is he basically wanted to press the reset button and didn’t want us to kind of just do it by rote. And on stage you didn’t have to see me go into the kitchen, so I didn’t have to handle the pots and pans and food, so I was in shock doing that onscreen.”

Davis cited the film’s shoot in Wilson’s childhood neighbourhood, Pittsburgh, as a particularly effective aspect of filming. “It was different in the sense of intimacy, in being up close and personal, being able to be in the house, in the rooms… And I think it’s always great to rediscover something that you’ve done for so long… One of the things Denzel said when we started it was ‘remember the love … if it doesn’t come from a place of love, then you can’t feel the loss.’”

Washington was happy to have made the film and unreservedly praised his cast. They all repaid the compliment and then some.

Sidney said, “He’s such an inspirational man, I learned a lot from him. He taught me a lot. He’s a lovable man; he’s like a teddy bear.”

Adepo described meeting Denzel for the first time when he auditioned on the Paramount lot. He worked himself up by preparing a spiel for him, making it clear how professional and ready to work he was. Only to find an extremely friendly, easygoing director greeting him. “I had built this whole scenario in my mind … [but] as soon as I opened the door, he gave me a pound and a handshake and a hug and I was like ahhhhhhhhh… It was my first time hearing Denzel’s voice outside of a movie.” He had to leave the casting office for a moment to calm himself down.

Williamson gave the most direct tribute to Washington. “I seem to be humbled by things almost on a daily basis, [but] being called upon by someone you respect so much like Denzel, who you’ve watched and you’ve worked real hard not to steal from because he’s so amazing. He’s always been that kind of an actor and peer, but to watch his trajectory and to watch how he’s remained this pillar of strength. He’s not trying to be a role model, but he means the world to all of us.”

All we know is, Wilson’s proactive mandate that only black directors should handle his work – he advocated Paulette Randall for those of his works she directed during his lifetime – was only recently broken by the National Theatre for Ma Rainey’s Black Bottom. Washington’s sure hand is a great return to the author’s dearest wish.

Fences will open December 16 in New York and Los Angeles and get a wide break on Christmas Day, December 25th, 2016.

Paramount is planning a UK release, but have not yet confirmed a date, as far as we are aware.