Once upon a time, film festivals meant travelling in a group, actively seeking out details of parties to be at, blagging our way in and nodding through every seminar or networking event that was on the program. We were always armed with flyers, think quirky cards from moo.com. Those were the days of film school when the meaning of a film festival was free drinks. The media most certainly did not help shape our expectations when they broadcast it as a red-carpet event with actresses roll calling the name of the designers who provided frocks and accessories.

Ten years later, I have grown up to be the person who attends film festivals for two days, with meetings booked back to back, skipping every seminar – because once you have heard one you have heard all, and the ‘experts’ on the panel tend to be the same. It is a lucrative business being a panelist for hire these days.  A film festival is not really like a festival, it is actually just a market for buying and selling films. You watch films to acquire them, to distribute them or because you know, after the festival they will never been seen again. Harsh but such is the world of film distribution.

This year, I was invited to attend Rotterdam International Film Festival as a guest of Propellor the tech hub, set up by Rotterdam, CPH: Dox and the European Film Market at Berlinale. The industry has finally woken up to the fact that lots of films are never seen outside the film festival circuit, assuming they even make it to a festival, and now, we are finally on the hunt for the Uber, Air BnB or Booking.com for films.

Three years ago, I decided to do just that with my production company when trying to make a film in Africa that is not about poverty, war or aids; drew the same blank stares from sales agents. ‘Great script but if the lead was British [read white, coz my lead was British, but black], this could really work’. My solution was to create a way of identifying the target market and collating contacts to ultimately distribute the film or prove to the sales agents that the world did not always need to be viewed through the lens of the normal human – the white bloke.

At Propellor my job was to present the technology, convince the industry gatekeepers that the past three years were well spent after incubator upon incubator and some public funding by way of grants. As I walked through the foyer, I played my usual ‘spot the black person’ game, and by the end of the day, I had seen none. The next day, I overdosed on the complimentary hotel breakfast. Europe is not so great for Visa cards issued by British banks after Brexit struck revenge on the pound to Euro exchange rate. In Rotterdam, people do say things as bizarre as ‘sorry we only accept Maestro.’

My eyes glazed as I glanced from poster to poster and politely accepted flyer upon flyer from ‘auteurs’ because except for American Honey and Moonlight, I had never heard of any of these films and after Rotterdam was not likely to. I tried the catalogue but there is just something unappealing about wading through a book full of films that you have never heard of before, made by filmmakers you are yet to know, starring actors not on People magazine. I went to the CineMart hoping to score a point on ‘spot the black person’ where projects in development are shortlisted to meet potential partners, still no colour.

Then I felt a stare. I looked up, it was a black person. I assumed she was expecting the nod. As I looked up she looked away very quickly. She has not seen Black-ish and was probably playing ‘spot the black person’ like me, except she was one of the ‘don’t get too close so they don’t think we are a gang’ breed. I smiled and typed away wondering why attendees at film markets were still predominantly white given that #blacktwitter is always up in arms around awards seasons. Or do folks not realise that film festivals are not festivals but markets where their scripts attract interest and the rough cuts get distribution.

I gave up and decided to do some work instead in the café and there they were Mahershala Ali and Barry Jenkins on almost every newspaper clipping on the notice board. Turns out there was a ‘Black Rebels’ program which was the highlight of the festival but which I had missed by showing up only on the days that my program was on. 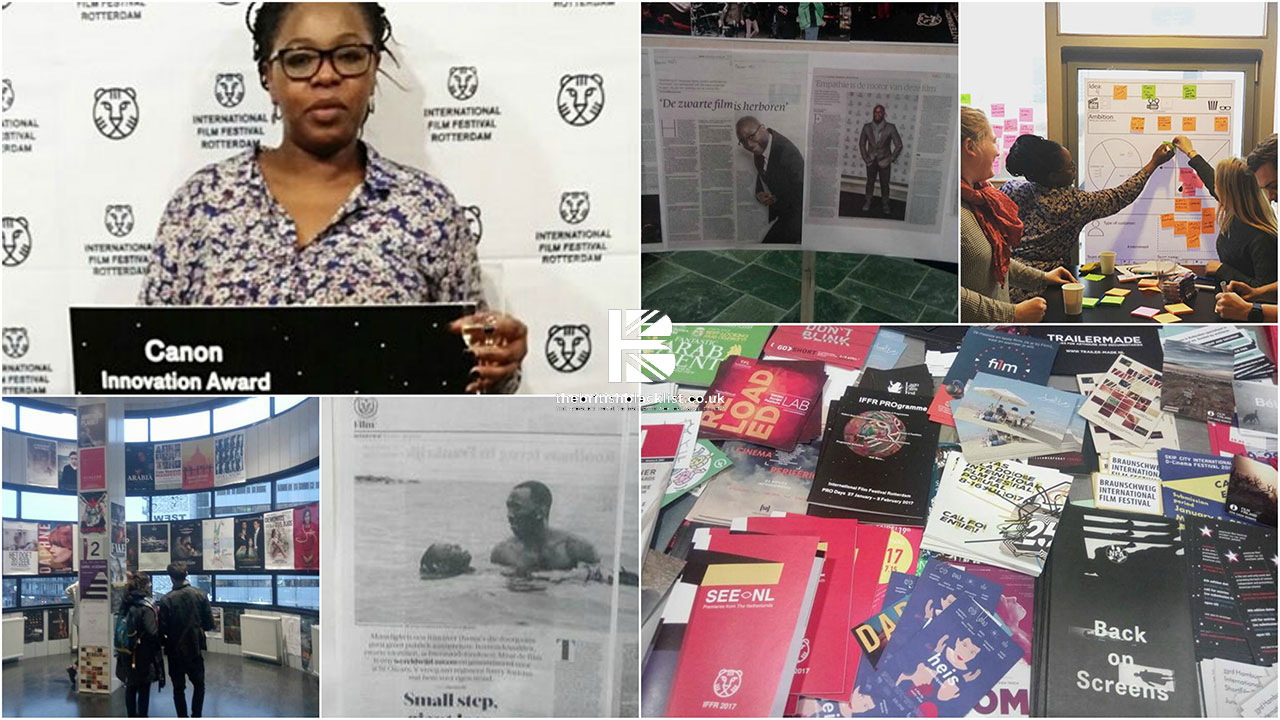 At the Cinemart lunch, I scored my first diversity point complete with a ‘nod’ when I met the programmer, who was still buzzing at the success of the strand. But then we realised we had spotted and nodded at the BFI Black Star symposium at the London Film festival. She increased my colour count by telling me without me asking, where all the films or projects with black folks were. I don’t think she meant to but this stuff gets intuitive after a while. I clocked eyes with another one, she had a project at the Rotterdam Film Lab. Yes, there was some effort but not enough from filmmakers from diverse backgrounds submitting and getting through with their projects.

Game done, I figured I could do some sightseeing but it turns out that Rotterdam was pretty much the train station and the surrounding square. So I attended my first seminar. It was called Reality Check. A discussion about new distribution models. Right up my street. The panelists were familiar. Of course. They spoke. We learnt that Mubi was going to invest in original content. The logic, content brings eyeballs to platforms. To watch the film or TV show, audiences subscribe and often, do not cancel after a free trial. Congratulations filmmakers, you are now, creating adverts for VOD platforms and you thought you were turning down well paid jobs in advertising to be serious filmmakers. The moral of the seminar? Films were expensive, audiences had too much on, cinemas were empty, public funding was disappearing, sales agent’s fees are unreasonable. Nothing new.

At Propellor, I was paired with my new team. 48 hours of brainstorming and pitching. Later, I won the industry jury award and had to pitch to the entire Cinemart crowd for an audience vote. I wanted to make a Trump joke about making cinema great again but I figured it could cost me. I was now a politician not an activist trying to get all films to the right audience. X Factor mode switched on, I reckon, liberals on the edge of Brexit might be on the edge of losing all sense of humour. I won their votes and had to face my ultimate fear, being photographed instead of taking the photographs. I evoked the voice of Tyra Banks from America’s Next Top Model and did not quite hit the angles but I managed to deliver a few without my eyes closed.

Kati Kati a film from Kenya produced by Tom Twyker of Run Lola Run and his One Fine Day Films outfit won the distribution grant. One Fine Day is one of the few schemes actively trying to train film crews in Kenya through an annual workshop in which everyone gets to make a feature film. Kati Kati had screened at Toronto and was on its way to Berlinale. The recipient of the award to help Kati Kati’s distribution was a white German bloke. Lovely guy who shared how difficult it was to distribute African films, with me, the African albeit with British citizenship. I chuckled and agreed with him knowing full well he was too liberal to get that him helming the distribution of African films with a European sensibility was part of the problem.

Then it was the after party. The very first party I had been to because I was an award winner. Previous nights, it was a quiet dinner in a restaurant with a select group because that is where the business gets done. Next day it was time to return home and prep for Berlinale. It was also the last day of the festival. Posters were still hung, tables were still full of distributed flyers. Bins and floors were dominated by discarded flyers, because regardless of the graphic design, very few people read them. We take them and if we are polite, bin them at the hotel.

My Berlinale was even shorter than Rotterdam. I had 48 hours to meet, greet and follow up conversations from Rotterdam. Berlinale has a special place in my heart. It was my very first international film festival in 2009, whilst I was doing my MFA and got selected to participate in the Berlinale Talent Campus. Courtesy of the British Council, we were sponsored and as a group, we did everything but sell films. We literally thought it was a ‘festival.’ I stopped by the campus and took a pic of the best banner I had seen in a long time. ‘Why don’t you get a real job?’ it screamed.

I skipped parties for smaller dinners, watched a handful of films in between meetings. I stopped by the new Africa hub and checked out the program. Seminars, same panelists, discussing the film landscape in Africa. The mantra if you want different results, do something different springs to mind. I congratulate Alain Gomis on his new film Felicite which I had just seen. I hope you see it but know you might never see. His last film Tey starring Saul Williams was Senegal’s official entry to the Oscars.

I spot the sprinkles of colour. Never as hard in Berlin, but still quite sparse. I did not try to get the nods. They were all familiar faces that I had spotted and nodded at before as they helmed yet another ‘African film’ panel. Akin Omotoso’s Vaya, KatiKati are all in the official program. I take a moment of silence for Black British films. Between black being synonymous with African Americans and Africa in cinema terms, not including the diaspora in Europe, I wonder where our projects in development are…

Victoria Thomas is the managing director of the Polkadot Factory an independent production company based in Edinburgh. She is currently in post production with, Born in New York, Raised in Paris, a feature documentary about hip hop in France in the era of ISIS.

To find out more about Victoria Thomas go to Polkdot Factory