Within the action-packed superhero genre, casting actors (as in male thespians) known for their critical acclaim, rather than their degree of physical hotness, has not historically worked out for the best. When I think of personal favourites Chris Evans as Captain America, Anthony Mackie as The Falcon, Chadwick Boseman as the Black Panther, Chris Pine as Captain Kirk, Mark Ruffalo as the Hulk or Ryan Reynolds as Deadpool, it’s not hard to imagine men wanting to be them, women wanting to be with them.

It seems to work slightly differently for the fantasy genre, possibly because brains are assumed when dealing with magic or myth and legend. They generally involve reading books and stuff. Aragorn (Viggo Mortensen) and Legolas (Orlando Bloom) aside (for some), the male cast in The Lord of the Rings and Hobbit franchises might worry the top of Heat Magazine’s annual Weird Crush Poll than People or Glamour Mag’s Sexiest Man Alive. Though Neeson, Willis, Washington, Stallone and Snipes (all soon to be joined by Smith and Damon), have the middle-aged-and-over action hero sewn up, Robert Downey Jr. and Don Cheadle’s casting as Iron Man (2008) and War Machine (2010) opening up the possibility that award-winning older men could carry big-budget superhero movies!

For Doctor Strange, Benedict Cumberbatch reportedly beat the shortlisted Jared Leto, Ethan Hawke, Oscar Isaac, Ewan McGregor, Matthew McConaughey, Jake Gyllenhaal, Colin Farrell, Ryan Gosling and Keanu Reeves to win the part. At 40, Cumberbatch is only in his 3rd year of big screen starring roles, and these only come along after his breakout starring role as a contemporary TV Sherlock Holmes in 2010. 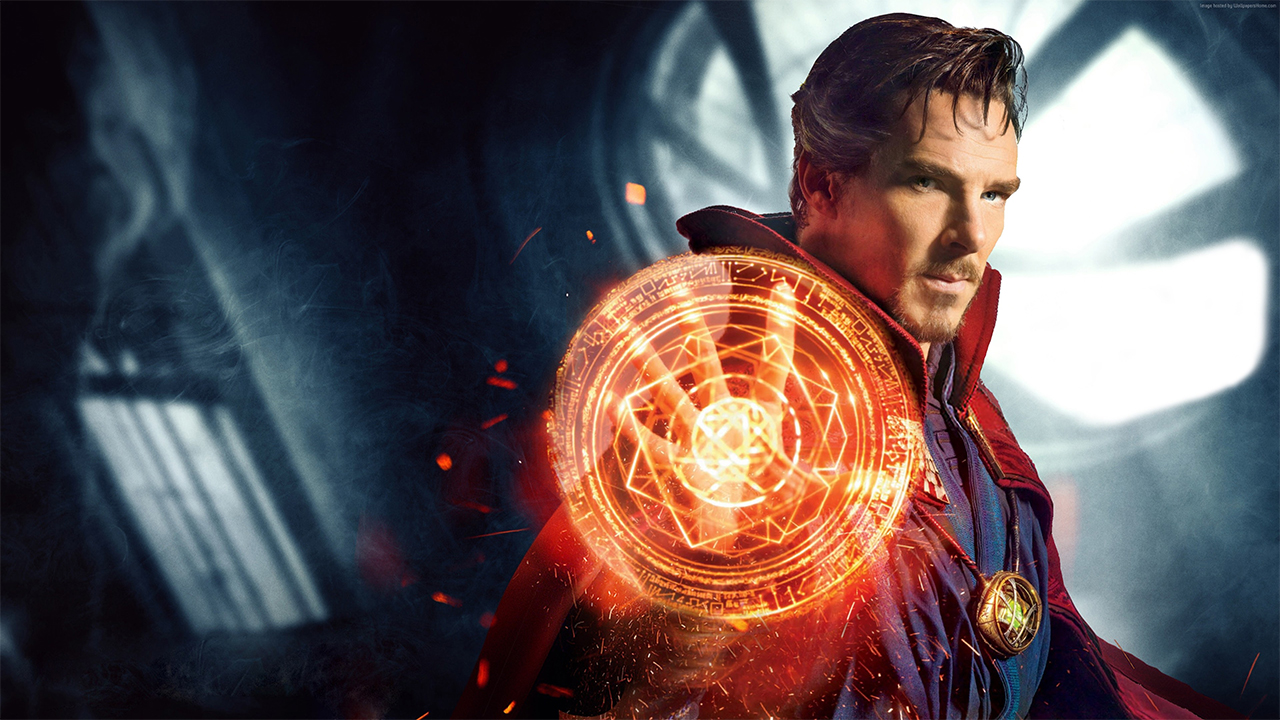 Somehow, they got the casting right!

Dr. Stephen Strange is a supremely gifted New York Neurosurgeon with hands steady enough to attempt manoeuvres others balk at. Doubly gifted with the perfect recall for anything he reads, and an IQ high enough to understand it… Well, let’s just say, you begin to see why Cumberbatch got the part! Inevitably, he has an ego the size of Manhattan, and is a commitment-phobe, despite the minimal commitment being to the strong, talented, independent ER doctor, Christine Palmer (Rachel McAdams) doing some good work here.

An horrific car crash ruins Strange’s hands, ending his glittering surgical career. Of course, he finds it impossible to accept and embarks on a fruitless search for the next medical miracle that might restore him. He is led to Jonathan Pangborn (Benjamin Bratt), a patient he refused to treat as a hopeless spinal injury case… now playing basketball. Pangborn directs him to the Kamar-Taj, somewhere in Nepal, to seek what he elusively says he found there.

Strange is admitted into the Kamar-Taj by Baron Mordo (Chiwetel Ejiofor), who introduces him to the Ancient One (Tilda Swinton doing Tilda Swinton). They tell the sceptical Strange that all they can offer is a path of spiritual healing, but they SHOW him that it means manipulating mystical power and magic. Strange wants to stay and study under their tutelage, and soon learns of the astral plane and other dimensions, such as the timeless Dark Dimension, inhabited by Dormammu, a consumer of worlds, powerful in dark magic and desperate to devour earth. He learns of ancient books and meets the ‘librarian’ Wong (Benedict Wong) who tells him of the recent murderous theft of pages from one of the revered tomes by former student and Master Kaecilius (a relentlessly determined and brilliant Mads Mikkelsen). He and his band of zealots intend to use them to try to summon Dormammu into this plane. 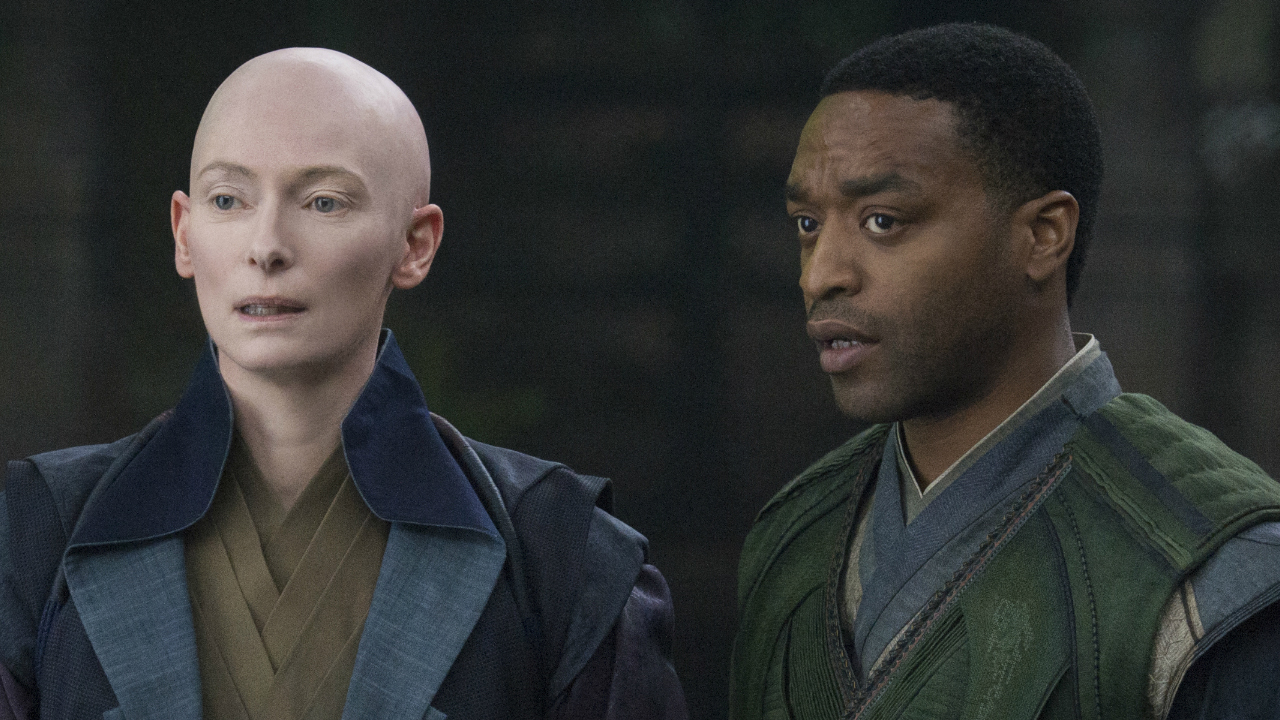 Initially making slow progress, Strange begins to excel. He learns, along the way, to bend time with the mystical Eye of Agamotto, and he acquires the Cloak of Levitation in his first confrontation with Kaecilius which inspires him to attempt to stop his unleashing Dormammu on the world – all with the help of Mordo.

Cumberbatch and Ejiofor make a great team. They deliver some of the best lines in some of the more ordinary moments. But it’s precisely those moments which make the film so enjoyable and they aren’t just limited to the two leads. Watch out for the deliciously acidic exchange between Strange and Kobna Holdbrook-Smith’s physical therapist, and, McAdams also shows a flair for comic performance when the Strange/Mordo/Kaecilius/zealot followers showdown in the Mirror Dimension wreaks unseen havoc in her ER.

Aside from the initially odd auditory sensation of Cumberbatch’s generic American accent, special effects, stuntmen and clever camerawork hide the fact that he has neither the physique nor the training to be entirely convincing in close quarters martial arts combat. In this, Ejiofor has him beat.

I was looking forward to seeing Ejiofor back in an intelligent action role, mainly because he was so brilliant as The Operative in Serenity (2005) – one of my two all time favourite bad guys (the other being Wesley Snipes’ Simon in Demolition Man, 1993). He might not be tall, but he has the physique, the physical discipline and the acting chops to be utterly convincing. He gives us a serene Master, dedicated to the Ancient One and steadfast in his beliefs. The problem here was, of all things, his accent! What started out as a vaguely exotic twang jumped around becoming here more African, there more British! AND, he was criminally under-used.

So, despite a weak story, long running time (115 minutes), and the comic book default of men with gifts demonstrating the emotional maturity of children, the acting between action sequences keep this movie firmly in the enjoyable zone.

Doctor Strange was released in the UK in October 28th and has already made $87.7m against its $165m budget. The US release is on November 4th 2016. So, between that and the ending, we will definitely be seeing the doctor again