Mr. Lenny Henry CBE has been making waves in the UK press recently…

…with his calling out of the elite British entertainment industry’s continuous cat and mouse game it plays with African Caribbean actors and actresses. Critiquing awards ceremony BAFTA’s for being too white, and the constant battle to get consistent African Caribbean programming on the main 5 British channels, Henry is the lonely most recognisable British Caribbean face and voice in comedy and has not always been recognised or appreciated as being an advocate of ‘black issues’…but that’s another conversation.

Currently Henry hasn’t been seen on TV as we remember him, instead, he’s been embracing the theatre world and has been met with critical aplomb for his stage debut in West Yorkshire Playhouse’s 2009 production of Othello as Othello,  as Antipholus of Ephesus in the National Theatre 2011 production of The Comedy of Errors and now, as Troy Maxon in the August Wilson play, Fences.

Directed by Paulette Randall – the first British African Caribbean woman to ever direct a West End play, Henry as Troy leads a cast of strong African Caribbean talent to tell the story of a man trying to get a handle on the disappointments life has cast him, whilst trying to find the strength to be a stand up husband, father and employee in 1950’s America where blacks are still oppressed and ‘living your dream’ is only deemed possible if you’re white. 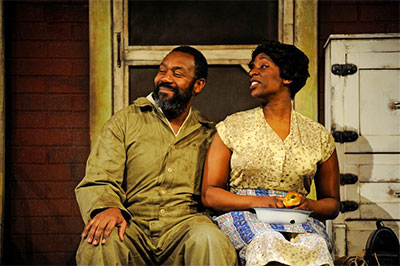 A life which revolves around work, home, and chilling on his front porch – Troy’s troubles are reflective of many an African Caribbean man’s pain today. Trying to make it in a world which appears to be in awe, fear, jealousy and hatred of the black man isn’t and hasn’t been easy and Henry’s Troy exudes the conflict this type of existence can bring. Guilty, innocent, helpless, yet in control Troy’s attempt to escape the world and the sins of his ‘evil father’ inevitably causes him to hurt the people closest to him.

Played by Tanya Moodie, Rose Maxon is the archetypical long-suffering African American wife, yet for once Rose isn’t portrayed as a neck-snappy short-tempered sistah – well not until pushed to the very limit anyway. Instead she’s warm, she’s glass half full, she’s Troy’s bright outlook on life, his reminder that looking upwards isn’t dangerous, she’s also the buffer between Troy and their younger son Cory (Ashley Zhangazha).

It’s through Cory’s youthful optimism affected by the change in the political social climate of the times that we are shown Troy’s bitterness, envy and regret. Going out of his way to thwart his son’s dreams by refusing to acknowledge that positive thinking and action can make dreams come true.

Henry, Moodie and Zhangazha create a believable African American family unit. Henry as Troy communicating Troy’s problems with such an ease and comfortable familiarity I wondered how much of Troy resonated with Henry personally. Moodie is fantastic in her often captivating brightness. But it’s when she gets ‘real’ with her husband – maybe I’m too affected by the stereotype – but it was then that Moodie shone as Rose and in a nutshell  her accurate capture of the bitter and the sweet lines Rose has to balance depicting what being a supportive, loving, strong, black wife is all about.

Colin McFarlane – who plays Troy’s best friend, Jim Bono and confidante pulls the storyline together neatly. Henry and McFarlane’s banter bounced around the theatre often providing the most laughs as they allowed us a peek into their friendship. Peter Bankole and Terence Maynard round up the cast with strong supportive performances.

The Book of Dust: La Belle Sauvage by Bryony Lavery after Philip Pullman