Whichever category you find yourself in, you can’t have failed to notice a couple of things. The REAL fans always want more; The REAL fans crave re-immersion in the Harry Potter universe and will instantly devour any new detail as it becomes available.

During the faithful reproduction of the 7 books (1997-2007) in the form of 8 films (2001-2011), there came a trio of supplements simply because they were mentioned in the books – Fantastic Beasts and Where to Find Them (2001), Quidditch Through the Ages (2001) and The Tales of Beedle the Bard (2008). In 2008, the untitled 800-word hand-written and signed Harry Potter Prequel, featuring James Potter and Sirius Black, was written and sold for £25,000 at a charity auction held by Waterstones. The first Universal Wizarding World of Harry Potter  theme parks opened in Orlando, Florida, in 2010; and then, the Warner Brothers (Levesden) Studio Tours and the Pottermore website opened in 2012.

Things seemed to settle down thereafter, but now, in this, the Nineteenth Year of Our Potter, JK Rowling is set to generate a couple of top-ups to the £238m made from 400m book sales (pre-script book publication) and $7.723bn generated from the 1179 minutes of film (combined budget $1.155bn).

On November 18th, the first in a new trilogy of films based on the Fantastic Beasts supplement, starring Eddie Redmayne and Carmen Ejogo, opens in cinemas. Then, after almost 2 months of previews, during which, it is reported, almost nothing has been changed, Saturday, July 30th brought the official West End opening gala for the 2-part story of Harry Potter and The Cursed Child. Swiftly followed by the publication of the hardback combined script-book (RRP £20 on Sunday, July 31st. Pre-orders at Waterstones exceeded 100,000 (£10 each); it was the most pre-ordered book of the year so far at Amazon (£9). US publisher, Scholastic, printed 4.5m copies in anticipation, whilst Australia publisher, Hachette Australia, claimed to have sold more than 100,000 copies – the year’s fastest-selling book – a printed stage script, albeit, a ‘Special Rehearsal Edition’! Unprecedented. 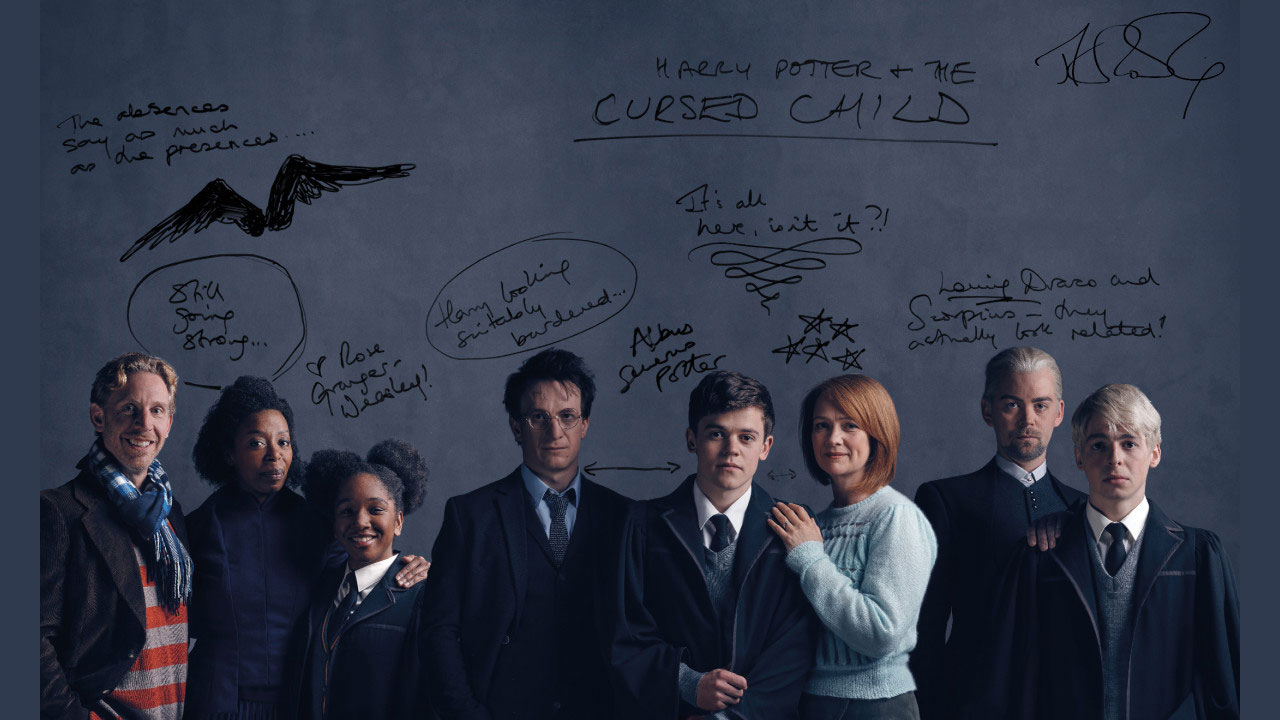 TBB was hugely excited to have been invited to the last 2 previews across two evenings, before the official opening night. We knew that almost 30% of the 35-strong cast were black, not least Hermione (Noma Dumezweni), her daughter Rose Granger-Weasley (Cherelle Skeete) and, as we later found out, at least 2 other beloved speaking characters, played by Chris Jarman.

The best thing about this play is that Rowling and her co-creators, director John Tiffany and playwright Jack Thorne, capture the essence of Harry’s Wizarding World. It really feels like the Potterverse, in which magic lives and anything can happen. Between the creative trio, set designer Christine Jones and Steven Hoggett’s movement direction, they accomplish a delightful string of special effects which will surprise and delight everyone.

The magic, crucial to anything Potter, neither takes a backseat, nor overwhelms, and, though intended to seem commonplace, will still take you by surprise. They have cleverly used both modern and traditional techniques, and a sound effects track, which would do the Magic Circle proud. For example, the transition from Muggle clothing to Hogwarts’ robes, combined with arriving on the famous Platform 9¾ at King’s Cross Station is a particular and early delight. Then, from the wand disarming ‘expelliarmus‘ spell, through travelling by flue powder, the polyjuice potion-induced transformations, entry to the Ministry of Magic and a magical duel, it seems no limits were placed on the imagination.

Deftly handled was King’s Cross transitioning to the moving Hogwarts Express and Hogwarts itself, with its marvellous moving staircases.  A couple of things possibly missed were the resident ghosts and an attempt at an actual Quidditch match. But, this was more than made up for by the truly astonishing and chilling Dementors. This is all delivered at breakneck speed in, generally, very short scenes to an almost constant soundtrack composed by Imogen Heap, which, although intrusive at times, was almost always atmospheric.

So, what is all this innovation and wonder in aid of? 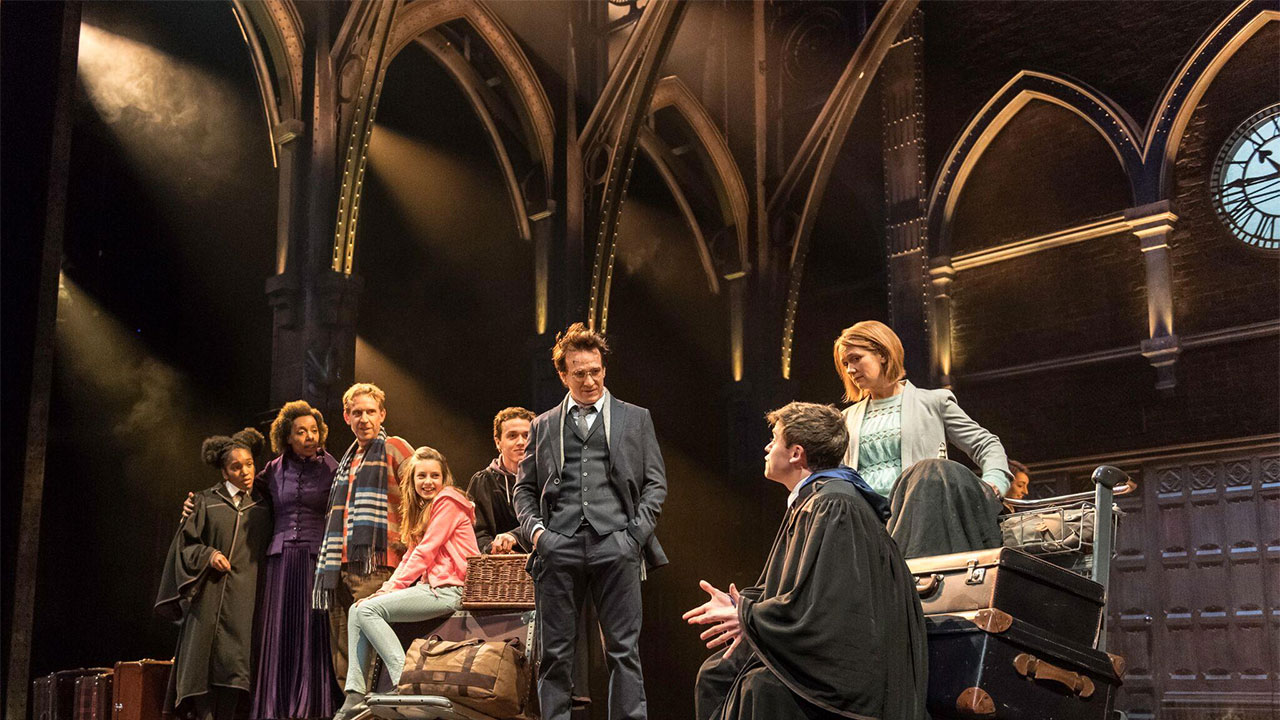 Harry (Jamie Parker) and Ginny (Poppy Miller) are middle-aged parents to eldest James, middle child Albus Severus (Sam Clemmett) and littlest Lily Potter. Ron (Paul Thornley) and Hermione (Dumezweni) are parents to Rose Granger-Weasley (Skeete). 19 years after the Battle of Hogwarts, it is the turn of Albus, Rose and Scorpius Malfoy (Anthony Boyle), Draco’s (Alex Price) only child, to tremble at what the Sorting Hat will make of them. So, right from the off, in revisiting Hogwarts, changes are afoot.

The premise is a good one, “It was always difficult being Harry Potter and it isn’t much easier now that he is an overworked employee of the Ministry of Magic, a husband and father of three school-age children. While Harry grapples with a past that refuses to stay where it belongs, his youngest son Albus must struggle with the weight of a family legacy he never wanted. As past and present fuse ominously, both father and son learn the uncomfortable truth: sometimes, darkness comes from unexpected places.”

But, this is not a re-fashioning of the original trio, as the story mainly follows the friendship between Albus and Scorpius, interjected with the latter’s unrequited love for Rose. In fact, the emphasis might surprise you, bearing in mind that the HP story partly originated with a female such as brainy Grainger firmly front and centre. Having started with Albus’ first day at school, we are rushed through the next 3 years to arrive, quite rapidly, in year 4, where a new character is introduced and the next 5¼ hours takes place!

Thus begins too many storylines which just seem to be reflections or variations on the main one. Some, which add very little, could have been edited out, as could a good number of the interludes I have seen described as ‘magical’. But most of them added very little and some were difficult to decipher meaningfully. Maybe they were intended to give the tech crew set-up time? Additionally, some of the expositions became quite cumbersome at times.

It’s difficult to believe that the quarter million people who have purchased tickets until the end of 2017, would do so knowing nothing of the Potterverse. Quite honestly for me, as one who has read (except the untitled one, obvs) and enjoyed all the books (except ‘V: Order of The Phoenix’) and seen and enjoyed all the films, I can’t quite reconcile my impression with the universally glowing reviews of this production. Especially when reviewers definitely saw the same show as I did and noticed the same flaws! I felt that there are some major plot holes, an unfortunate and overall neglect of the female characters, and too few classic lines amidst at times clunky, clichéd and, occasionally unbelievable, dialogue. 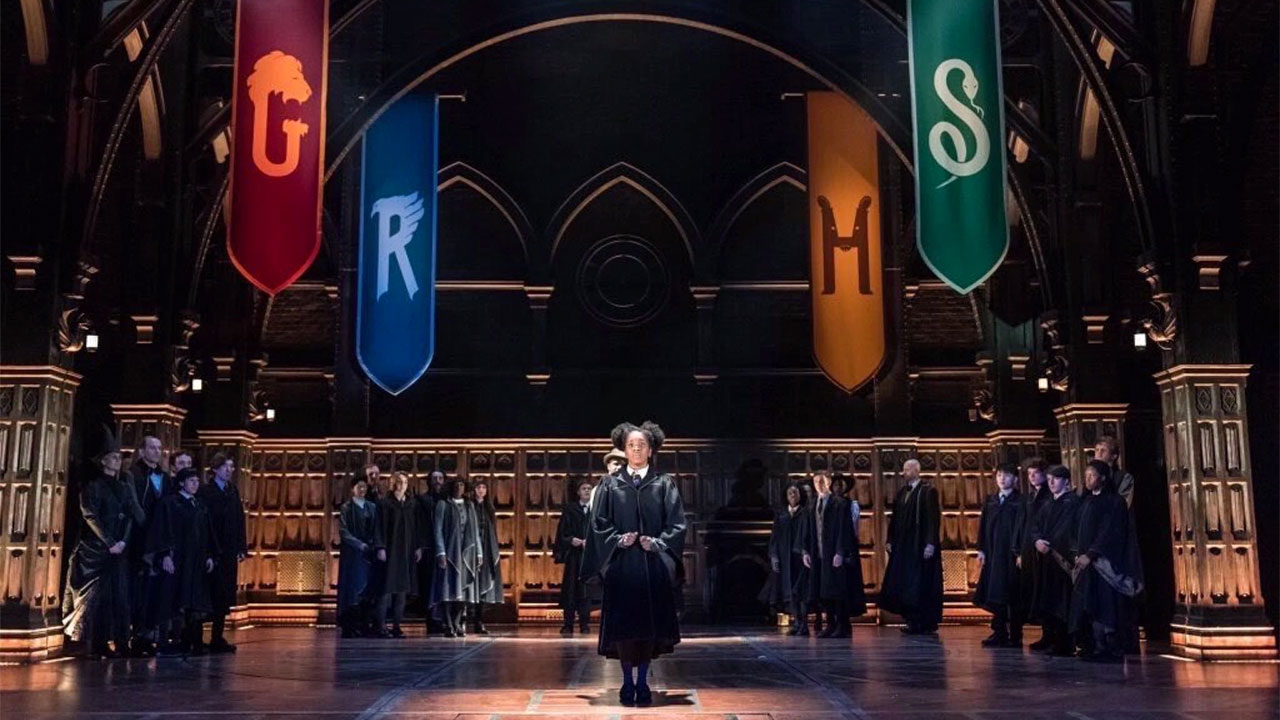 Given that we attended on the last couple of preview nights, some of the standards of acting can perhaps be forgiven. Dumezweni, Skeete and Jarman, the main black British cast members, did a great job – particularly Skeete (Rose), who was criminally under-used. Dumezweni’s Hermione is acceptable enough if you cast your mind back to that final scene in Harry Potter and the Deathly Hallows: Part 2, which inspired this play.

As a new character, she is definitely appealing. As an artist, she showed real comic flair and physical conditioning, particularly once the polyjuice potion came into play. Our other TBB Favourites, Chipo Kureya, ‎Rosemary Annabella, ‎Helen Aluko and Nicola Alexis, rose to the occasion and did their jobs admirably in infusing their scenes with energy and spirit. Of the main cast, Thornley’s Ron and Boyle’s Scorpius carry the humorous heart of the piece brilliantly, with Thornley managing more than any of the others, to connect most directly with the 17-year-old Ron we know. Of such a big cast, Boyle has to be the breakout star. He was given some of the best lines and had the talent to deliver them more than effectively.

It occurs to me that really, it doesn’t matter what I write as a review for a Harry Potter play. A ravenous appetite for all things Potter, a desire to be a part of the ‘in’ thing, or just a need to complete a set of something, will ensure that this show is the hit the investors assumed it would be. This should earn it a Broadway transfer at some point. Sitting near to us, were a family from Dubai (mum and 3 of four kids aged 7-11), and a couple of delighted African-American women who had travelled to London especially!

Harry Potter and the Cursed Child runs at the Palace Theatre. To book your tickets go to the website.