At an event this morning at BFI Southbank, the three finalists vying for the second IWC Schaffhausen Filmmaker Bursary Award in Association with the BFI were revealed by Sam Lavender. At £50,000, it is the most significant bursary of its kind in the UK film industry.

Hope Dickson Leach won the inaugural Bursary in 2016 when her debut feature The Levelling had its world premiere at the BFI London Film Festival. The film went on to be released in May 2017 to great critical acclaim.

Oscar®-winning director Tom Hooper (The King’s Speech, 2010, Les Miserables, 2012, The Danish Girl, 2015) will join Amanda Nevill, CEO of the BFI and Christoph Grainger-Herr, CEO of IWC Schaffhausen, to select the winner, who will be announced at Luminous, the BFI’s biennial fundraising gala on 3rd October 2017.

The Bursary is presented in recognition of outstanding British talent and is designed to support a writer and/or director at the beginning of their career, bringing them the financial stability and time needed to develop their creativity and focus on future projects without the pressure of deadlines or the distraction of taking paid work – a precious and extremely rare opportunity for a filmmaker, and is literally a gift of time.

To be eligible for the Bursary Award a writer and/or director must be UK-based and have their first or second film in Official Selection at the BFI London Film Festival in Partnership with American Express®. The high calibre of shortlisted applicants is testament to the creativity alive in British independent filmmaking with the three finalists showing a diversity of voices and presenting original work with a distinctive tone.

The final three in contention for the Award have already achieved international renown, having just shown at the Toronto International Film Festival and one at Cannes earlier in the year. They each have the common theme of presenting the story of outsiders at odds worth their communities. That they are made from such different perspectives highlights the commonality of human struggles whether being told in the North of England, Channel Islands or the still heavily British-influenced Commonwealth; Christian, Witness or Folk/Traditional beliefs; men or women: 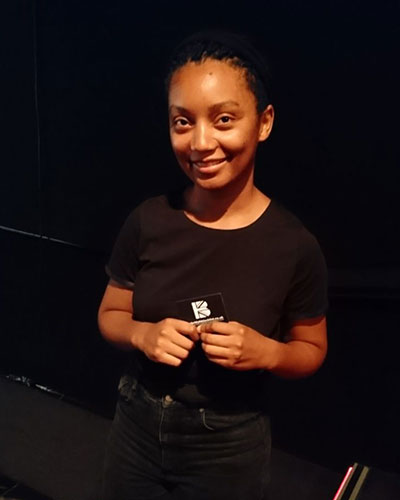 Rungano Nyoni is writer-director of I Am Not a Witch, already screened at Cannes 2017, and screening in the LFF’s First Feature Competition (UK Premiere). Nyoni is also self-taught, born in Lusaka, Zambia and grew up in Wales, UK. Her short films have featured in over 400 film festivals.

In 2009 she won a BAFTA Cymru for her short film The List. Her subsequent film Mwansa The Great was funded by UK Film Council and Focus Features (USA). It was selected at over 100 International Film Festivals, awarded over 20 prizes and nominated for a BAFTA in 2012.

In 2015 Rungano was selected for the Nordic Factory, Finnish/Danish  co-production where she co-directed Listen  which was nominated for a European Film Award 2015 and won the Best Short Narrative Prize at Tribeca Film Festival.

I Am Not a Witch, is Rungano’s debut feature and premiered this year at Cannes Film Festival in the Directors Fortnight Sidebar, and also screened at TIFF ahead of its LFF premiere.

Nyoni said: “It’s an honour to be nominated. It’s just so rare to have the opportunity to develop your project under your own terms without having to hustle.”

In conversation this morning, Nyoni admitted to being very angry at the time of writing this film, but tried to balance that by deliberately injecting humour where she could. The young star, Maggie Mulubwa, was spotted by Nyoni’s husband, who saw Mulubwa playing with friends whilst they were scouting locations in North Zambia. Returning to the capital, they could not find their Shula, the 8 year old protagonist accused of being a witch. They contacted the Chief, who organised a search for the child using a picture.

Daniel Kokotajlo is a self-taught writer-director. Born and raised by a Ukrainian-Italian family in Manchester, UK. His debut feature film, Apostasy, is inspired by his own experiences growing up as a Jehovah’s Witness in the North of England while attending art college. He learned how to use a camera working as a cameraman at his local greyhound stadium. He is a recent alumnus of the Biennale Cinema College, EIFF Talent Lab, and Creative England’s Talent Centre. He was selected as a Star of Tomorrow by Screen International in 2015. Apostasy will screen in the LFF’s First Feature Competition (UK Premiere).

Kokotajlo said: “I’m grateful to have been given the opportunity to make my first feature film, Apostasy, and to have been shortlisted for the IWC Filmmaker Bursary Award. The journey to this point hasn’t been easy for me and that’s why this Award would be a real help – it’s a genuine means to sustain filmmakers from working class backgrounds as we continue to hone new, exciting stories.”

In conversation with host Sam Lavender at the BFI this morning, he was proud to state that he used working actors from England’s North-west at a time when Manchester is fertile for TV work. In understanding the meaning of his film as blasphemy – usually by one who has left a religion and chooses to speak out about it, he wasn’t sure how the local chapter would receive the news of a prospective film, and he kept it as quiet as possible, even using a code name. In a stroke of serendipity, a Jehovah’s Witness centre was sold to be used as a cafe, and he was able to secure its use for the film.

Michael Pearce, the only finalist not present for the announcement, is writer-director of Beast, screening in the LFF’s First Feature Competition (European Premiere). Pearce attended the Bournemouth Arts Institute, then the National Film and television School. His first feature film, Beast, premiered at the 2017 Toronto Film Festival in the Platform section. In 2014 Michael was selected to be part of Guiding Lights scheme and was mentored by James Marsh. In 2013 Michael made his first TV drama, Henry, through Channel 4’s Coming Up scheme and made the short, Keeping Up With The Joneses, through the BFI’s 2012 Shorts scheme, the film was nominated at the 2014 BAFTA and BIFA awards. In 2011 Michael was one of Screen International’s UK Stars of Tomorrow. and his feature script was selected to be developed through the Torino Film Lab Script & Pitch Workshops and was then selected to be part of 2012 Frame Work programme. Previously to that Michael’s short film, Rite, was nominated at the 2011 BAFTAs and BIFAs, played at over 40 international film festivals.

Michael Pearce said: “The IWC Bursary creates an opportunity where a filmmaker can forage for that 2nd film without any immediate financial pressures to work on projects they’re not passionate about…”

In a unique partnership that unlocks direct philanthropic support for UK creativity and the future of British film, the Filmmaker Bursary Award was created by Swiss luxury watch manufacturer IWC Schaffhausen and the BFI. IWC Schaffhausen has been a sponsor of the BFI and the Official Time Partner of the BFI London Film Festival since 2014.

Hope Dickson Leach won the inaugural Bursary last year when her debut Feature The Levelling had its world premiere at the BFI London Film Festival. The film went on to be released in May 2017 to great critical acclaim.

Of the finalists, Gaylene Gould said that they were distinct, “… in having strong, mature, contemporary British voices… Audiences will latch on to and support these films…” because they were able to say something distinctive whilst also speaking to popular tastes.”