Yet,  Elba has an impressive comedy pedigree. His first television role, aged just 22, was in the British sitcom 2Point4 Children (1994). Going on to star in sitcoms on both sides of the Atlantic – Absolutely Fabulous (1995), Girlfriends (2005), The Office USA (2009).  His animated work includes Zootropolis (2016, Chief Bogo) and Finding Dory (2016, cockney sea lion Fluke). He appeared in courtroom comedy-drama Queens Supreme (2003) and The No.1 Ladies Detective Agency (2008). Not forgetting some of his feature films This Christmas (2007), Guy Ritchie’s music meets criminal underworld comedy RocknRolla (2008) and comedy short, An Epic Journey To Coming To America (2014).

1# You’ve got some popular TV comedies under your belt. Were they inspiration for the series, or were you struck by the humour in your childhood?

It was more about looking back at life and wanting to highlight some of the humour growing up in the 80s, and as a performer wanting to do more comedy. For the first 10 years, I lived on a council estate in [Hackney] before I moved to Canning Town. The whole show is focussed around the differences between my family, me and my neighbours.

3# Agnes is a wonderful example of emigrant motherhood – tough as nails to try to keep everyone safe and the bills paid, soft and nurturing keeping the family together as a loving unit. Was the chemistry between you and Madeline easy to find?

Yes, she’s a great actor. I’ve worked with her before. We definitely found the two characters quite easily and enjoyed playing them.

4# After that amazingly poignant performance as Damilola Taylor (Damilola: Our Loved Boy, 2016), Sammy Kamara will be playing your son Kobna. How does it feel watching someone play you as a child?

It’s great to have Sammy come on board. He happens to be Sierra Leonean as well, so it was quite an easy decision to have him play me as a 10-year-old. He’s slightly older than the character, [but was] really chuffed to play me and play that role. He’s great in it. He’s a very funny, natural actor. We were lucky to get him. He is very focussed on his work. We had a very short time to shoot this, so I didn’t get time to hang out with Sammy unless we were working on the set. But, he was like a sponge, absorbing everything. It was great to watch.

5# Both Elba’s dad and his character Walter are factory workers. Walter takes his responsibilities seriously, but still has a glint in his eye – an appetite for fun. What did you draw from your dad’s experiences at Ford?

My dad had lots of stories about the people he worked with that we drew upon. Some of the characters he came across. Nearly 30 years there in Dagenham, if not more, it’s where a lot of his life was. I didn’t really dive into the politics of Ford, [but] it’s very much part of the situation comedy, based around a community. But, we’re not saying it’s Ford. Bill Bailey’s character [Bagpipes] also works at the car factory so a lot of comedy takes place there.

6# The fantastic Jimmy Akingbola plays your younger, more adventurous brother Valentine.  How did you get him on board?

Jimmy is a really accomplished actor but currently lives in the States. So he wasn’t the first choice, only because we weren’t sure we could get [him]. But, when Jimmy found out about it, he wanted in, and that was pretty much a game changer because he went out of his way to get here to do it. I didn’t know him personally, though we have mutual friends. So, it was just the process of having a chat, he auditioned for the role and, without a doubt, was the hands-down favourite. He came, he did it, he knocked it out the park, and we’re really lucky to have him. He is in the show more than I am! It’s not so much centred around me. He’s a really key component because he plays my uncle who was a big influence in my life. So, that’s why having Jimmy play this role was really special for us and he’s great in it – very funny, very committed.

I grew up with all sorts of sitcoms – Only Fools and Horses – all those shows, and they are made to a formula that works. It’s not just gag, and gag, and gag… There’s some heart, you care about the characters. When you’re watching a show, they feel like you’re in that world. Declan knows how to set up characters – their back stories, their world. Of course, this is shot ‘now’ and it’s set in the 80s. But, I really wanted the style of it to feel quite nostalgic, and at the same time, feel modern for a new audience. So we’ve taken techniques that are slightly more modern in the edits but the feel, the style of performances and jokes, are very much a nostalgic salute. Declan definitely was the right director to help us set that up. Then Cecile, a new director who directed two episodes, she brings a slightly different approach to the show. But, equally, is as exciting to work with.

8# Grace Ofori Attah is attached to five of six episodes, alongside the only slightly more experienced Claire Downes, Ian Jarvis and Stuart Lane attached to four – all from The Job Lot (2015)…

Grace is Ghanaian and this is one of her first writing jobs – she’s a really talented writer and brings a lot of cultural relevance to the writing. She came on board to inject some honesty and heart to the cultural strength of the show – very important to me and important to the characters. That’s what Grace is really good at.

The music is also quite important – in my heritage and my background. We focus on the years I wanted to become a DJ. So, music plays an interesting character. In most establishers, we use music from the 80s – Congolese, Nigerian, Sierra Leonean, to just set the scene up. Of course, you remember Desmond’s – Desmond’s used Soca music in between their breaks, set-ups and establishers. They used one theme mainly. Well, we use quite a chocolate box of music from pop 80s to reggae to West African, and it is very much to help set the scene – it embeds the audience into the world that we’re talking about here. Because it’s quite a mixed world. From West African [tunes] to David Bowie – that’s quite a big jump.

That’s what it was like in my experience back in the 80s – my mum and dad listening to all sorts of music. So, I wanted the audience to get that sense that this is what was going on in my house. 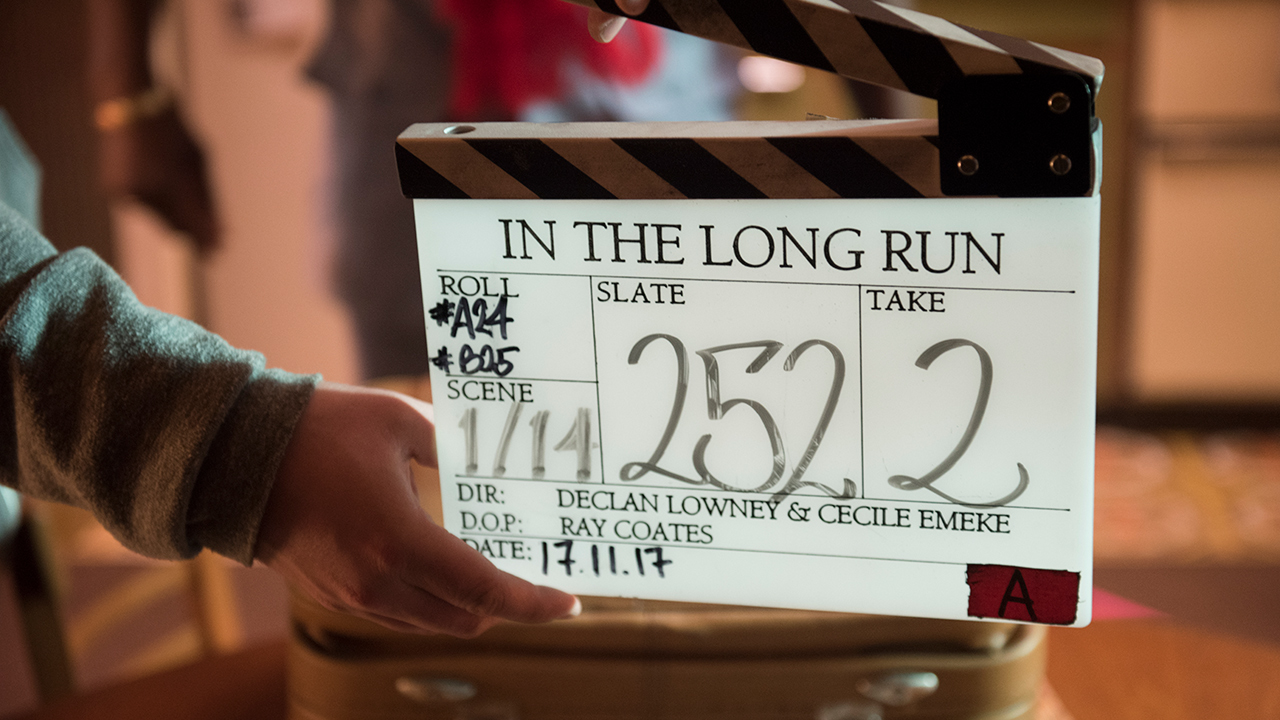 Elba is currently in the thick of shooting the 5th series of Luther, and it’s going well. But, no exclusives …

9# As Green Door Productions, you seem to be fast accumulating a lot of great projects, discovering young writers through competitions that actually seem to lead somewhere… Are you proud that you took that first step to create it?

Yes, it was four years ago… Akua [TBB] was documenting what it was I was trying to do and supported me. So, I really appreciate The British Blacklist. At Green Door, a show like In The Long Run is important to us, because there’s a real cultural stamp that is inherently mine, that I can use my company to create. At the same time, we look at diversity and inclusion as very important. It’s not just about having people of colour on-screen, it’s about having a real diverse, inclusive crew and company.

My company is that and we try to emulate that as much as possible. It is hard work, trying to give young writers, new writers, new directors a shot – it takes longer, and there’s a lot more risk, if you like because people don’t want to take the risk. It is a longer road, a harder road to travel. But, I’m dealing with it, and I have Green Door and other things that we’ve managed to achieve.

We’re a very young company, and we’re not anywhere near the top ten companies in this country. But, we are striving toward what we want to do. We haven’t watered down my ethos or remit, which is to give opportunity, which is to discover new talent, which is to diversify thought.

This show, In The Long Run, is a real joy. To have Bill Bailey and his family, his ethnicity and his culture represented alongside my culture, my family my ethnicity, is very much what I think London is about – cultures clashing against each other

I’ve always said, if you want to be honest about who we are, we have to show it in our products, on our TV, in our stories. So, yes, I’m excited for Green Door and what we’ve been achieving.

10# How did you deal with issues of race, and racism specifically, in In The Long Run?

We’ve tried to be as honest about what it was [like] back then in the 80s, without being blasé, without being insensitive to what racism is today. But, being honest about it – this is how it was. We don’t take it lightly, we consider every single racial slur or racist storyline really seriously in the show. But we don’t overcook it, and we’re not overly sensitive about it, and I’ll stand by that because it’s a depiction of time.

It’s very different now, which is, I think, part of the show’s appeal – people will look back and think ‘Wow! I see how people used to deal with racism back then.’  Whether it was right or wrong, they dealt with it differently. Right now, racial tensions are at their highest point, because everyone’s very sensitive about it, and I understand – of course, they are. Back then, they were less sensitive, so we depict it how it was.

At the preview screening of the first two episodes, there was laughter by the end of the first beat, and we caught every little nod and detail which gave the grainy single camera effect a built-in authenticity.

Though Akingbola is of Nigerian heritage, he is also a Canning Town lad who went to Elba’s school a few years behind. So, this only added to the genuine warmth between all of the actors, so evident by the way they interacted with each other. Whilst the entire central cast give a strong performance, Jimmy and Elba should receive particular praise for their performance – particularly when together or with Appiah.

Elba seemed especially proud (and maybe a little relieved) at what they had achieved together, not least because it was really well-received by the invited press audience.

In The Long Run premieres on Sky 1, Thursday, March 29th2018, at 10pm as a double bill. All episodes will be available from Thursday 29th March on Sky One and Streaming Service NOW TV