Try to find a picture of Rikki Beadle Blair doing anything but smiling, and you’ll be looking a while. Yesterday, in central London, he was one walking smile as he welcomed family and friends to a reception to thank THEM for his MBE! Awarded for his services to drama in the 2016 Birthday Honours List, and in typical Beadle Blair style, he accepted the award, thanked the Queen nicely, then literally shared it with the people he loves and inspires him! 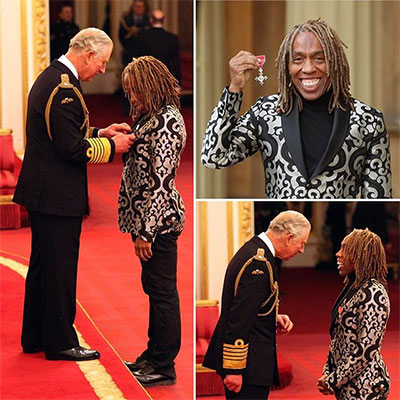 “I think I’m quite talented… I became a writer when I was 3 years old… I’ve been a playwright since I was 7 and I’ve given my life to this. Anyone who knows me knows, it’s what I think about first thing in the morning, last thing at night and in between when I’m unconscious,” he said to a loving gathering.

“Every single thing that happens to me, I wonder how can I make it into art? How can I share it and further my understanding of human beings and who people are? But, I know that my real talent has been people. I’m really good at meeting people, I’m really good at making alliances with incredible, talent people. The only thing that matters more to me than making art, is making art with beautiful talented people…YOU. So, I know that that MBE was for you, and for you, and for you [pointing into the crowd], and for every single person who has ever got in my way or encouraged me or made art with me. So, I really wanted to fill the room with people as many people as I possibly could who’d inspired me. And to tell you that You. Are. An MBE!… All the hundreds of actors that I have been privileged to direct and audition and work with, who I devise things for and write things for and create things for, everyone knows that actors are my inspiration. I can’t start the day until I’ve got my cast, and what you’ve done for me had been beyond anything. I can’t express how exciting it is to be in [rehearsing] rooms with you … ”

For those unfamiliar with him, you should at least recognise the surname – he is older brother to that other fabulous acting talent Gary Beadle, (Les Blancs at the National Theatre, 2016, The Interceptor, 2015, Eastenders (2001-04). In his own right, he is an actor, singer-songwriter, dancer/choreographer, screenwriter and designer. But, what he is most known and admired for is his work as a director, playwright and mentor to artistic talent both personally and via his artistic directorship of multi-media production company Team Angelica.

This is NO exaggeration.

I first met Beadle Blair last year in Shoreditch, as he hosted a dramatic read-through of, Slap by one of his mentees Alexis Gregory – the writer and star, as transsexual hooker Dominique at an emotional crossroads. A sharply observed drama with sizzled with dry wit and unabashedly tragic humour.

He directs British Blacklister Lynnette Linton’s #Hashtag Lightie for a short run opening on Tuesday 31st January until February 4th at The Arcola Theatre. Its two night run had to be extended due to popular demand and it’s still SOLD OUT. Linton is associate director of the Gate Theatre, and is soon to go to The Donmar Warehouse!

Beadle Blair then starts rehearsing his own play, The Legendary Children In The House Of Fierce, set in the Vogueing Halls of late 80s/90s New York. He is currently “pouring [his] heart and soul into that one”. It will be taken to Holland, but will return to the Old Vic workrooms on March 11-12th. He is particularly proud of the costumes, which are boots. And nothing else. It’s going to be an event – like a fashion show with a runway. “Come and learn about black gay culture. You will leave and you will be a black kid from Harlem when you walk out that door! Trust me.”

He will be doing a Greek piece with old friend Chris Panayi, who has created, Alexander: Two Souls, Pone Body – a piece exploring Alexander The Great’s bisexuality. Beadle Blair will be playing Alexander’s lover and he and Chris will be doing a naked dance together!

After that is, Summer In London – a co-written romance set amongst the homeless community of East London‘s Stratford. A homeless boy falls in love with a girl and takes her on a range of amazing dates, which are free, as its summer in the city. But then the falling leaves begin to worry him. Beadle Blair is particularly proud that he has a cast made up entirely of trans actors. Promising an extravaganza which will feature fireworks and sunsets, eclipses, boats. They will make the theatre into most romantic rollercoaster experience they can… “I can only do those crazy audacious ideas at the incredible, historic Theatre Royal Stratford East! I cannot say thank you enough for how much Kerry [Michael, artistic director], and that theatre in general has invested in Team Angelica – in our writers and  in our actors. No-one else comes close!”

Go to TBB Stage Events to find out more and book tickets to #Hashtag Lightie here.

DO check out Beadle Blair’s January 11th appearance on BBC Radio 4’s Mid Week (his major segment starts about 10 minutes in) for not only a great general discussion, but also his simple but brilliant life philosophy