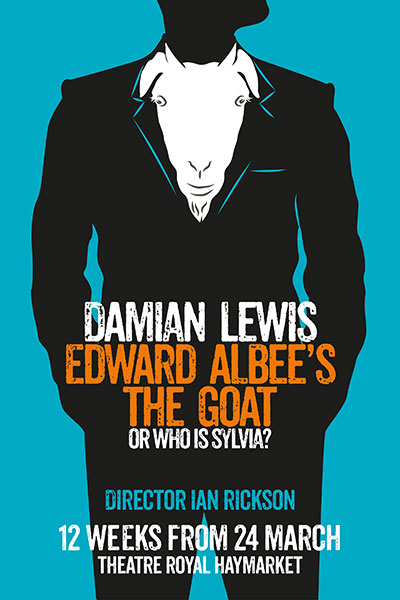 Tony Award-winning and Academy Award-nominated actor Sophie Okonedo will join Damian Lewis in a new production of Edward Albee’s The Goat, or Who Is Sylvia? Directed by Ian Rickson, the production will play a strictly limited 12 week season at the Theatre Royal Haymarket from 24th March to 24th June 2017.

A darkly comic and disturbing view on the collapse of familial relationships, Edward Albee’s The Goat, or Who is Sylvia? has all of Albee’s characteristically witty tones as well as being a deeply tragic portrayal of a married couple Martin and Stevie (Lewis and Okonedo) and their teenage son in crisis when the father embarks on an improbable and impossible love affair from which there is no return.

Widely regarded as his late masterpiece, Edward Albee’s The Goat, or Who Is Sylvia? is brought back to the London stage following Albee’s recent death.

Sophie Okonedo OBE was born in London and trained at the Royal Academy of Dramatic Art. She has worked in a variety of media including film, television, theatre, and audio drama. Okonedo began her film career in 1991 in the British coming-of‐age drama Young Soul Rebels before appearing as Wachati Princess in Ace Ventura: When Nature Calls (1995) and Stephen Frears’ Dirty Pretty Things (2002). She received an Academy Award nomination for Best Supporting Actress for her role as Tatiana Rusesabagina in the 2004 film Hotel Rwanda, a Golden Globe nomination for the miniseries Tsunami: The Aftermath (2006) and BAFTA TV Award nominations for the drama series Criminal Justice (2009).

Okonedo made her Broadway debut in the 2014 revival of A Raisin in the Sun for which she won the Tony Award for Best Featured Actress in a Play. In 2016 she received a second Tony nomination for her portrayal of Elizabeth Proctor in Ivo van Hove’s Broadway production of The Crucible which also starred Ben Whishaw, Saoirse Ronan and Ciarán Hinds.

Okonedo was last on the London stage in Jeremy Herrin’s Haunted Child at the Royal Court in 2011. Previous work at the Royal Court includes Katie Mitchell’s Nightsongs, I Just Dropped Off to See the Man, Been So Long and Women and Sisters. At the National Theatre Okonedo has appeared in Troilus and Cressida and Money, and has had roles in numerous productions for the Royal Shakespeare Company including Tamburlaine The Great, The Changeling, A Jovial Crew and The Odyssey.

Most recently on television, Okonedo starred in Peter Moffat’s political thriller Undercover for the BBC opposite Adrian Lester and played Queen Margaret in BBC One series The Hollow Crown: The War of the Roses alongside Benedict Cumberbatch, Judi Dench and Phoebe Fox. Other television credits include the role of Winnie Mandela in the BBC drama Mrs. Mandela; Clocking Off; the Doctor Who episodes “The Beast Below” and “The Pandorica Opens”; BBC series Extraordinary Women; miniseries The Slap; Sky1’s Sinbad; BBC One’s Mayday; and The Escape Artist.

Damian Lewis OBE won unanimous international acclaim for his role in Emmy and Golden Globe award-winning drama Homeland. Most recently Lewis has starred in Showtime series Billions. With an expansive list of diverse film, theatre and television credits Damian Lewis has evolved into one of this generation’s most respected and sought-after actors.

Edward Albee’s, The Goat, or Who Is Sylvia? runs at the Theatre Royal Haymarket from April 5th April 2017. With the final performance, 24th June 2017