Many of our TBB Favourites tell us about their work outside of London and for once we had the pleasure of being right there with many of them at the Royal Exchange Theatre, Manchester, as the Talawa Theatre Company staged its first production of Shakespeare’s tragedy King Lear in 22 years!

For those of you not so familiar with the tale, Lear (Don Warrington) is the vain, aging king of Britain who chooses to divide his kingdom between his three daughters. First, and before the whole court, he wishes to hear how much they love him. Righteously, he settles back on his throne and the older two eloquently flatter him with the breadth and depth of their love. Satisfied, Lear bestows on Goneril (Rakie Ayola) and her husband, the Duke of Albany (Mark Springer), and then Regan (Debbie Korley) and her husband, the Duke of Cornwall (Norman Bowman), one third of the Realm each.  Finally, it is the youngest (and Lear’s favourite) Cordelia’s (Pepter Lunkuse) turn. She is appalled by the question, and by the exaggerations her sisters use to outdo each other. She loves her father deeply, and feels it is too cherished to be expressed with mere words.
Lear, embarrassed and outraged, disowns her, and allows her sisters to divide her third between them.

As the loyal Earl of Kent (Wil Johnson) appeals to his liege Lord to reverse his decision for fear of tragic consequences, Lear banishes him, heartbroken, from the land. Intending to vie for the hand of Cordelia, the King of France (Miles Mitchell) and the Duke of Burgundy (Rhys Bevan) are warned that she now has no dowry to offer them. Burgundy immediately withdraws his suit, but the French King recognises an honesty and courage in Cordelia and is not dissuaded. As the betrothed couple leave Britain, King Lear bargains with his remaining children that he should spend part of the year with each of them with a retinue of 100 knights and his trusty Fool (the fantastic Miltos Yerolemou), to which they readily agree.

Meanwhile, the Earl of Gloucester (Philip Whitchurch), another nobleman loyal to Lear, has recently acknowledged his youngest bastard son Edmund (Fraser Ayres) and admitted him to his home. Still resentful and dissatisfied, Edmund immediately begins manipulating his father into distrusting and disinheriting his older half-brother and rightful heir Edgar (Alfred Enoch). Bewildered, Edgar suddenly finds himself a fugitive and the fortunes of the two families become entwined.

Shakespeare inimitably weaves a tragic tale around themes that have, again, become strangely relevant to modern life. Whilst most would acknowledge that the natural order of things is for the younger to inherit power from the older, this is primarily a moving tale of the fragmentation of family, usurpation and elder abuse. Rather than being cherished as an elder deserving of respect and consideration, the once all-powerful Lear finds himself sliding into the mental decline and confusion of probable dementia. Four hundred years down the ages and the Bard completely nails one of our worst modern social shortcomings!

King Lear has been widely adapted for the stage and screen, with the title role inhabited by such accomplished actors as John Gielgud, Lawrence Olivier, Donald Sinden and Brian Cox. But what of ‘The Black Lear’?

Talawa’s first production in 1994 was to have fulfilled one of the dearest career goals for the great Norman Beaton (Desmond’s; Empire Road). Sadly, illness struck and it wasn’t to be, so the young Ben Thomas (EastEnders) stepped in. Prior to that, Ira Aldridge was probably the first on these shores c. 1859, James Earl Jones’ 1973-74 Lear is still hailed as one of the greatest performances, and in 2013-14, the wonderful Joseph Marcell (Fresh Prince of Bel Air) toured worldwide as Lear with Shakespeare’s The Globe Theatre production.

For our pleasure, Sarah Frankcom (The Royal Exchange Theatre) and Michael Buffong (Talawa) wooed Don Warrington into the part. It was an inspired choice, because anyone who knows Warrington’s work, knows that from his earliest to his latest TV roles, he has the natural air of royalty about him and he’s in great shape for what is quite a taxing physical role. He gives us not a moment of comfort as we sit riveted through his painful transition from the arrogant, self-assured but weary ruler, to the grief-stricken shell of a man in whom we can only glimpse his former potency. As he beseeches the elements and interrogates his predicament, you will be hard-pressed (between breath-taking moments) not to root for him, despite his earlier conceit. His lightest bittersweet moment comes as he nimbly, gleefully trots off-stage, daring his prospective captors to catch him! 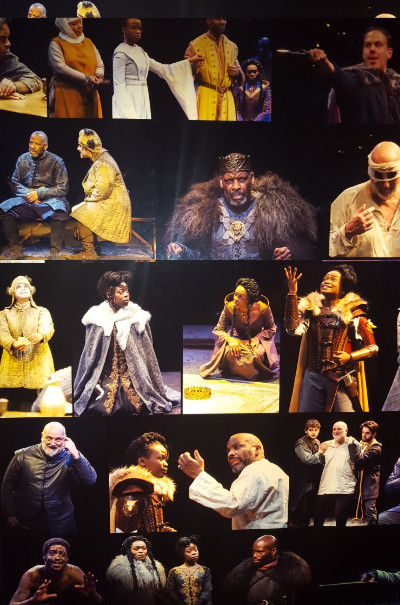 The rest of the large cast are magnificent. Ayola’s Goneril radiates bitter enmity as she, perhaps understandably, plots for the power that should have been hers by birthright. The diminutive powerhouse Korley is a revelation as the ruthless and deadly Regan, who revels as the classic middle child. By birth she was not entitled to inherit much, and by temperament she was not the favourite. But, she married her perfect match in Bowman’s charming and dangerous Cornwall. Here is a couple that could rival the Macbeths, or maybe Bonnie and Clyde. Surprisingly, brave, tender Cordelia has less to do in the story than I expected, but Lunkuse infuses her with enough fire and silk to do her justice.

Despite the outdated life choice of pledging fealty, Johnson inspires an empathy for Kent, such that you can relate to him as the loyal heart of the story. He is a man who has gladly bound his own life to his king’s. The prospect of banishment is unimaginable to him, yet in his exile, the prophetic Kent may be the only one who gains any measure of grim satisfaction amidst all the misfortune he predicted.

Gloucester is just a wonderful Shakespearean character – steadfast and trustworthy, and Whitchurch absolutely nails it. But, it is his sons who really get to shine. Ayres is yet another revelation of this production. He puts his personal intensity to great use as the disgruntled Edmund who pulsates with malice and will sacrifice anyone to further his ambitions to command great wealth and compensate for his start in life as an outcast. Meanwhile, just because Enoch gets to play the wrongly accused Edgar doesn’t mean there is no challenge for him. He is all compassion and turmoil until, as a fugitive, he cunningly hides in plain sight. The way he does it will have you nodding in acknowledgment that here is a notably versatile young actor.

The remainder of the Company lend sturdy support in their various roles and each has at least a brief chance to shine. Goneril’s haughty steward Oswald (Thomas Coombes) plays the caustic, willing weapon to perfection and Gloucester’s people (Sam Glen and Sarah Quist) do their part more than capably. Tayo Akinbode creates a brooding, melancholic sound track which is powerful in its subtle ebb and flow, and fully enhances the treacherous atmosphere. Designer Signe Beckman makes great use of the central, circular space of hard-packed dirt floor, torches and the occasional extra prop. Yet, an elaborate set design is not at all missed. The in-the-round set up lends a depth and dimension to the all-engrossing performances coaxed from the players by the über talented Buffong.

So, we say, jump on a train to the charismatic City of Manchester up until May 7th, or head across to the Birmingham Repertory for 2 weeks thereafter. But DO try and catch this exceptional production of a Shakespearean classic.