Gbemisola Ikumelo is a multi-talented creative who manages to balance writing and directing, as well as theatre and TV acting roles.

We caught up with her after the successful 3-night preview run of her play The Den at Swan Wharf last year, and more recently when we heard that she would be appearing in the world premiere of Sarah Waters’ dark 2006 novel The Night Watch when Hattie Naylor’s adaptation opens at the Manchester Royal Exchange this month.

The Den was her 2015 immersive theatre debut which was, quite frankly, awesome, well-attended and blessed with fine weather, as much of the first half was outdoors… 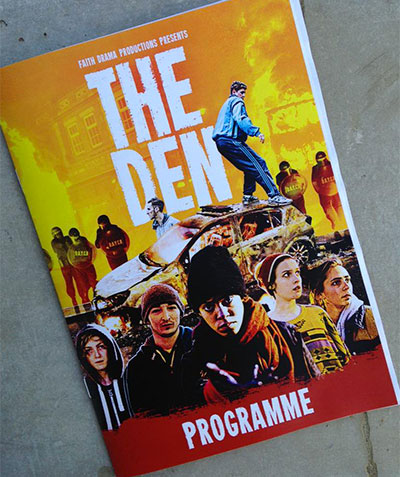 It was brilliant! We were over-subscribed, more than sold-out! It was great – really high energy…

Most of us weren’t familiar with the immersive theatre medium, let alone site-specific immersive theatre. We were queuing outside, handed these scraps of paper, as we were herded in we heard the wonderful monologue from Rizza (Sam Rix), then we were corralled into the first outdoor space.

That unfamiliarity, that wanting to blend in and not be picked on either to be thrown out or made an example of, or even to be part of the performance, was quite powerful. Because when ‘Lisbet’ was chosen from the crowd, you really did think she was a random member of the audience initially, It absolutely worked – we really felt like that world’s ‘Freshies’ – people who had made our way to this haven, but who might not actually be allowed to stay.

It was very unsettling…

Our perception was shaped by the conversations our group had been privy to, just like in life. It was particularly effective when Chase, Rizza, Abrun, and George were each arguing their case, we the audience didn’t know who was telling the truth because we weren’t the all-knowing fourth wall. It was cleverly done.

These are the kind of questions I wanted people to ask of that sense of the ‘other’ in that community, who is the ‘other’? Is it the ‘morwan’ [adult] woman? Is it them? Your argument and your allegiance come from who you’re with throughout the show, so you get the sense of genuinely how wars and disagreements, how conflict in communities, arise because you only see one side of it. We were having meetings around exploring ways to further develop characters and just the challenges of people who are exposed to certain elements. So there are a lot of things we’re still developing. I learned a lot from having a full live audience.

At just over two hours long with an interval, I’m not sure I could go back 3 more times to experience it from all four group perspectives. There has to be an element of improvisation, just because of the nature of the medium, in which case, it’s never going to be the same show even if I did go back 4 times in a row…

No, absolutely not and sometimes the audiences are so much more lively and responsive than others. When you invite an audience member to say something, the character has to respond and engage in any arising conversation. So a lot of the rehearsal was prep – having a dialogue, a language, a Den Dictionary so that they can call upon the dialogue of the world in improv situations.

You’ve got a lot of stage credits on your CV. This is theatre, obviously, but improv is a slightly different animal. Where did your improvisation references come from?

As an actor, I love theatre, I love the thought that even though you’ve rehearsed this show, it is going to be different every night, just because the audience is different every night. There’s just something really exciting about that. With The Den, I have to give credit to the actors. We spent a weekend away together as part of our rehearsal process. There was a half a day in character, so they kind of knew who they were, the characters were so fleshed out. It was definitely a process and a testament to their skill.

What I liked about The Den and why I think it’s so timely and such a powerful piece is because it wonderfully demonstrates that neither children nor adolescents are adults – even when they are procreating, cultivating, and killing. If you think about The Hunger Games, The Maze Runner or Divergent, Ender’s Game, it’s part of this modern disease where they only ever show the protagonists as strong taking on adult roles with absolutely no point of reference, and no inkling of how things can degenerate without the emotional maturity to manage it. What I like about modern plays is their commitment to showing layers and you’ve definitely done that with The Den.

When did you get the idea to develop it as an immersive piece and what are your future plans for it?

Last year [2014]. Because when the Theatre Centre commissioned the idea initially, it was about presenting it to school audiences in a way that was a little more [engaging]. So I would say that that was my first experience of immersive theatre. I didn’t really understand what I was doing. I was writing and flitting between ideas and conventions that didn’t really work. When I saw this site in East London I thought that seems like The Den. I love film as well, so I started being more inspired by that in a cinematic sense. When I really started thinking [cinematically], unwittingly I mentally started unpacking the experience, having to see it 360 rather than there’s a fourth wall and really wanting [the audience] to have all five senses engaged. So when you set that as a challenge, you can’t help but start embracing the idea of immersion.

In terms of its future, if we were heading into a run after the previews, there are a lot of things I’d want to change. I always wanted it to be a one-act or no-interval play. So we’re working towards changing a few things to make that possible. Originally, we were talking touring, but having got it all under control technically I would like to give this piece a longer run in a fixed space – a good few weeks to give it the momentum to grow in the mouths of the actors. Whether in the same space or a different one – that’s exciting as the play would change with each space.

Since we last spoke to you what’s been happening?

Lots of random things. Balancing creating new work of my own with being an actor mostly. I spent the earlier part of the year shooting the first series of a new sitcom for BBC3 called Sunny D and prior to that, I’ve been adapting The Den for another run sometime in the future.

Sarah Waters’ The Night Watch, is set over a 6 year time period starting from the end of the second world war but going backward until we are bang in the middle of it. The play slowly reveals the mystery of these 8 characters. Who they are now, who they used to be and how these separate people have had an effect on each other throughout the years. I largely play a character called Mickey who was an ambulance driver during the war. She is very good friends with Kay who in this adaptation is our way into a lot of the stories we visit.

When we first see Kay she is broken and a shadow of her former self. My character really works hard to bring her back to who she was. Mickey is a bit of a free spirit, she lives on a boat, is a mechanic, drives cars, which for the time as a woman wasn’t the norm. She’s a gay woman who is as “out” as one could be during that era and so there is a real sense with Mickey and all the other characters that we are peering into this subculture of people living these under the radar lives at a time where the world was exposed and blown wide open because of the war. I knew of Sarah’s book Tipping the Velvet but had not read The Night Watch until after I had read the play adaptation.

Tell us about how you find the TV / Stage transition, what can we expect from Sunny D and is comedy a new challenge for you?

I’ve never really compartmentalised my career as an actor. Ive always been prepared for the eventuality that I could be expected to do it all – TV, radio, film, plays etc. In all these instances I’m still me approaching the text and the characters in relatively the same way. The differences I suppose tend to be more technical ones so in that sense your training or experience kicks in. So knowing you’re not giving this big booming performance when you’re shooting a close up for the camera! But for me, it never seems like a massive transition from one medium to the next.

That said Sunny D was my first comedy series and so in that way, there was a lot of learning on set! But I was blessed to be surrounded by comedy veterans like Don Warrington and working with a bunch of people who just naturally have these incredibly funny bones just kind of inspires.

What’s next after this production?

In terms of acting. The joy of not knowing for a while. But I will be heading back to London to work with FAITH Drama Productions on a few projects with some exciting emerging talent. So watch this space!

The Night Watch runs at the Manchester Royal Exchange from 24 May – 18 June 2016. For more information and to book tickets, visit: https://www.royalexchange.co.uk/whats-on-and-tickets/the-night-watch