Though he’s had roles in the rebooted Star Wars franchise, A Moving Image a film by British Nigerian filmmaker Shola Amoo, and BBC longstanding series Doctor Who you may not readily recognise this breaking new talent. name.

Describing himself as not just an actor, Omoshaybi has also branched out into filmmaking, he’s just completed writing, directing and starring in his first feature ‘Real‘ a romcom which takes an honest look at the highs and lows of black love, lead by Pippa Bennett-Warner. Whilst he awaits the final release details for his debut, you can catch Omoshaybi in a new indie film, Burning Men.

Burning Men is a thriller/horror about three friends in a struggling rock band who when hard times strike decide to sell their precious vinyl collection. Whilst at a London record fair they unearth a rare Black Metal record and decide to steal it and sell it out of town. It’s on this road trip up North that they find themselves being troubled by an unseen dark force.

TBB Talks spoke to Omoshaybi about his role in the film, his progression as a filmmaker and if he’s ever personally stolen anything… 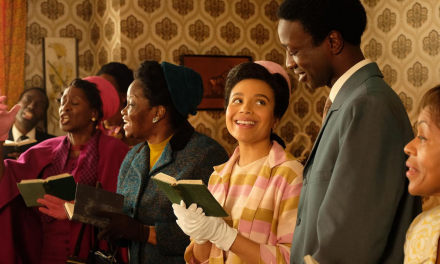