The West End REP season runs from 22 October to 7 December.

Presented by the National Youth Theatre of Great Britain (NYT) the REP company will stage the world premiere of ‘Victoria’s Knickers‘, a comedy following a sassy, young Queen Victoria directed by Ned Bennett (An Octoroon at the National Theatre); Writer’s Guild Award winner Evan Placey’s ‘Consensual‘ exploring teacher-pupil relationships and the age of consent in the UK and a gender fluid version of ‘Macbeth‘. The three plays will be lead by British Black actresses Isabel Adomakoh Young, Alice Vilanculo and Marilyn Nnadebe in starring lead roles for each play, including as Lady Macbeth and Queen Victoria.

Marilyn Nnadebe Black British – of Nigerian descent Actor by day, customer service manager by night… or is it vice versa?

You became an actress because …

Acting feels like something I absolutely need to do as opposed to something I just want to do. It keeps me happy yet challenged despite all the stresses. When I was growing up, some relatives were of the opinion that Nigerians don’t act, let alone Igbo Nigerians and I guess I thought to myself ‘challenge accepted’. Though, of course, that opinion just isn’t true (especially nowadays). I’ve been inspired by the likes of Chiwetel Ejiofor, Arinzé Kene, Sophia Okonedo, and Nonso Anozie.

Can you remember the first scene you watched which had the most impact on you?

I’m not looking to get anyone in trouble here but I’ve got to confess that ‘Pretty Woman’ was probably the first movie that had an impact on me. I was reported quoting some of the lines at nursery. The scene where Julia Roberts is ecstatic and Richard Gere walks in on her singing (quite badly) a song by Prince in the bathtub. Not appropriate for a kid, I know, but whatever you think of the story, you can’t knock the acting. Come to think of it, it reminds me of the moment when Diane is drunkenly singing to Freddie in Consensual.

Talk about your steps into acting …

I was encouraged to keep acting by my teachers at school every step of the way, from primary school assemblies and throughout secondary school (special shout out to my first teacher who told me to give acting a try – Ms. Hart). I then decided to keep the family happy by studying something ‘sensible’ at Uni, but I didn’t want to let go of acting altogether, so I joined NYT. After graduating in Accounting and Finance, my goal was to train in Acting, so I applied for a few drama schools and took up a scholarship awarded to me for the two-year course at Fourth Monkey Theatre Company. I then thought I’d try my luck at applying for NYT Rep because I had reached my last year as a member and wanted to be involved in an NYT production. I still suffer from shock (every now and then) that I got in.

Tell us about your character ‘Diane‘ in Consensual?

Diane is a pregnant late 20s geography teacher and head of Year 10.  She is also a mother of a little girl, wife of an accountant and mentor to a trainee teacher. Though it sounds like she’s got her life together, the play starts with her meeting up with Freddie, a student from her past; he has come to the conclusion that she had groomed him, whilst she thinks he took advantage of her. The subsequent fall out of this leads to Diane’s downfall. 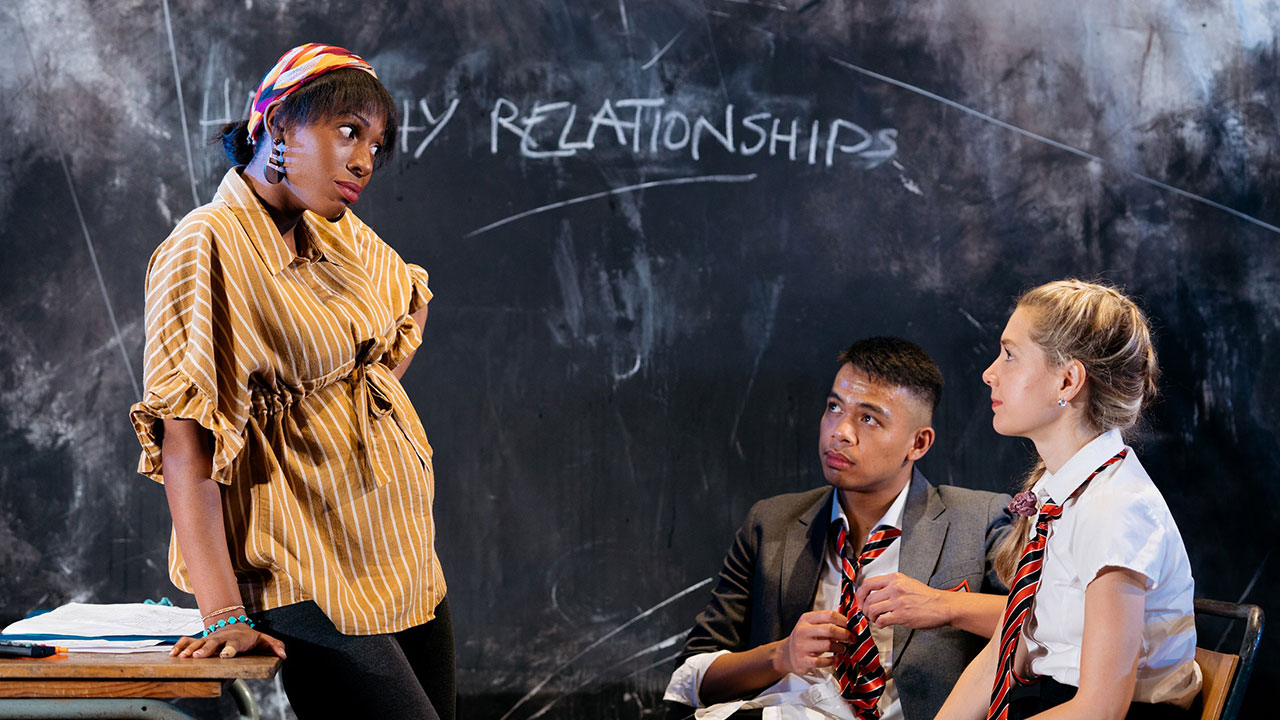 How did you develop your character?

I connected to her emotions and her inner almost instantly and then had to work to shape Diane’s outer – the way she masks her emotions and her physicality. Our movement director, our heavily pregnant director (at the time of rehearsals) and the associate director (a mother) all gave me tips on the stance of a pregnant woman and the way to sit uncomfortably, which I then explored for myself. I also worked on fun little ticks and physicality, for instance, the script says she has tablets in the present as well as in the past, so I thought her stress goes to her head – and played with reaching for my head and face every now and then.  I decided not to play her as hiding the truth of what happened that fateful night seven years ago, but actually suppressing the whole truth (as hinted at in the script) and thinking about her state of mind throughout. This led me to really play with her level of intoxication and the conflict of staying professional but also her need to help others. I think this was crucial to make sure that the story didn’t seem so black and white.

There’s significance that you are one of three black actresses leading shows as part of this year’s West End REP, what does it mean to you, and how do you hope it will impact your career?

It means a great deal because the representation of black actors (particularly black females) has always been a bit sketchy in Britain, and far behind the US. There seems to be a shift in the industry recently that is allowing for more differences to be seen and so it’s so empowering and hopeful for the National Youth Theatre to have three posters that feature three black actresses. All three of us are playing characters that weren’t necessarily written to be black (Diane, Queen Victoria, and Lady Macbeth) which is a real boost of confidence when it comes to breaking down barriers and disproving the myth that black actresses can’t bring in audiences or aren’t deemed striking enough. We’re all so different in look and casting as well, so there’s a great range on display. I hope that those attending as part of the industry are also excited by this and explore blind casting more.

Someone offers me a great acting job for screen or theatre (not too fussed which one) –  I accept. I later go on to win an Oscar or two.

If you weren’t acting you’d be?

If you ruled the world?

I would put racists on an isolated island and limit them to resources that haven’t come from other races. Amongst other things.