Directed by Stephen Levy, Epiphany is a short film targeting those involved in gang culture with a strong Christian message of hope. TBB Talks spoke to Stephen to find out why he decided to make his latest project

My name is Stephen Levy, film director, and producer of Epiphany. I currently work for a large corporate organisation as a senior creative/assistant manager in charge of motion graphics and video production. I studied acting at the Mountview theatre school and after working on many well-known sitcoms like Desmond’s, The Bill, Miranda, EastEnders, and Casualty and films including Judge Dredd my passion for film was ignited by watching how TV shows and films were directed and produced.

Whilst studying acting my turning point was I decided to leave work as a senior graphic designer to study Digital Visual Effects at the University of Kent in the hope that I could find a job in film. After graduation, I decided to pursue Motion Graphics and Video Production as a career, not knowing that these skills would enable me to make my first short film. Like Steve Jobs said: “You cannot connect the dots looking forward, but you can connect the dots looking back.” All of my past was preparing for this moment and it feels good because I have learned so much about directing and producing. My aim is to make my first feature film in the New Year.

Epiphany is based on true events. Can you tell us a bit more about that and whose story this is?

The first part of the story is my encounter with a young man called Lenny who I met in Brick Lane. He came from behind with a hoodie over his head and put his hand on my shoulder. As I turned to confront him thinking this was going to end badly, instead we engaged in a deep, meaningful and open conversation about his life, which ended with me praying for him, and him crying. This left me speechless and my heart filled with so much compassion for this young man. One act of kindness can make all the difference.

The second part is based on an ex-family member who was kidnapped by some youths, held in a warehouse and forced to give up his credit cards, eventually they let him go, but the whole event left him traumatised. His story stuck with me, so when I had my encounter with Lenny I thought somehow these two stories had synergy, and I was right.

Though Epiphany is based on truth there are some dramatic elements too why did you make those adaptations?

The kidnapping was real. The sensational murder plot came after the seventh draft. My original plot was weak and didn’t have the intensity I had in my mind’s eye, so I needed something to keep the intensity of the scene to flow and to keep the audience on the edge of their seat, so I came up with the murder sensational plot, which I am happy with.

This is your first short film. Congratulations on such a beautiful story. What were some of the challenges that training at Raindance couldn’t have helped you foresee and how did you overcome them?

Everything! You quickly realise that “theory is theory” but practice is completely different. In practice, you have various challenges, such as cast, budget, location, permissions, equipment and hire. The most challenging thing for me was to complete the film whilst my mother was dying of cancer and dementia, and I still had to be committed to the project and to the cast and crew.  Sadly, she passed away just after the second day of filming, but she would have been proud. So, my strength to overcome these obstacles came from my faith in Christ Jesus and support from my family and friends.

How did you finalise the script and what is your relationship with the writers Carl and Dean?

I originally wrote the script and Carl developed the first draft. Due to budget constraints and I no longer could commission him so I brought in Dean who I have known for 30 years to revise the script. I finalised the script myself because there were certain elements that needed to remain authentic.

Tell us a bit more about the process of casting Justin Marosa as the priest and Andre Fyffe as Lenny?

The casting process was not traditional. I got to know Alice Henley, one of the actors in the film while working at a design agency in the city. I casted her to do some voiceover work for me and said to myself if I was making a film I would like her to be in it and low and behold I had the script, she read it and loved it. I asked Alice if she knew any black actors and she introduced me to Justin, and then Justin introduced Andre. When I met them both I instantly knew that they were the right actors for the roles, “pure instinct” or destiny… 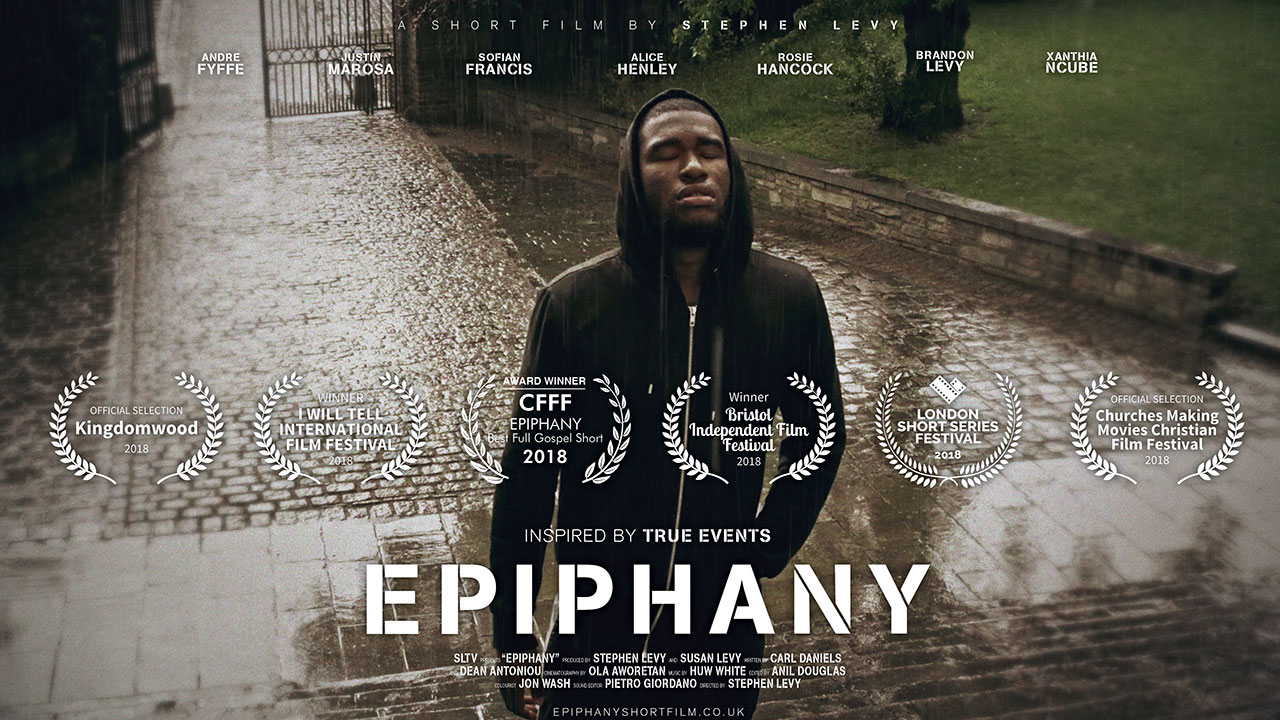 What are your hopes for your film’s future?

I hope the film goes on to make people think about the power of the Gospel and its ability to change lives. Also, to show my talents as a first-time film director/producer in the hope I will get investment to make a feature film or a Netflix series. I would like to spend the rest of my life making meaningful films that will impact the world and inspire the next generation of young filmmakers like my son. This one is for you Brandon.

This film is not your stereotypical look at the streets of London and their stories. It is a very fresh perspective on it by bringing faith into the mix. Is religion a very important subject matter to you?

Yes, it is, if it wasn’t for my religion I might not have taken the time out to engage in a conversation with Lenny or be sensitive to his needs. The Gospel has taught me to think about others and I can equate this to the Good Samaritan. His tears for me was an indication that there was a void in this young man’s life, and it was a privilege to see him let it all out in that moment and be set free. That is the power of prayer, and that is the power of the Gospel.

The graphics, in the end credits especially caught my attention. How important do you think it is for filmmakers to have experience throughout all aspects of production, up to and including post-production?

For me, this is so important, because my background is in Graphic Design and Digital Visual effects to a degree level so everything had to be considered from pre-production down to the final credits which I created myself. I was hands-on throughout the whole project. Because I was also the producer and I had to save money, I did some of the editing, compositing, and filming for the pick-up myself. My ambition was to make a miniature movie, not a low budget short film. My goal is to make a feature film, so I decided to use the short film to make every aspect of the film stand out even down to the credits.

As an artist, you clearly have a strong voice about the messages you want to get across. In relation to your future as a filmmaker, what kind of stories are you really interested in telling and seeing on the screen?

I love true stories, this is why I am a fan of documentary films. I like the truth. I enjoy seeing ordinary people have their voices heard and see them overcome life challenges. I would like to bring stories of hope to the screen, stories that also challenge the status quo and encourage people to ‘rethink their current thinking.’

Where can we watch Epiphany?

The film is still on the film festival circuit at the moment and it will be for the next 12 months. Epiphany has had the privilege of being officially selected for five film festivals and we have won two film awards, so far, one for best full gospel short film, and the other for the best inspirational short film. The next film festival screening will be at Kingdomwoods in Atlanta Georgia at the beginning of October and in London at the London Short Series Festival, 1-3 November 2018, John Lyons Theatre, Covent Garden. Hopefully, the New Year will bring more screening opportunities and Epiphany II. Watch this space! If you would like to find out more please follow me on Instagram.