You probably would have last noticed Thomas Dominique in Netflix’s recent Black Mirror series, now the actor who hails from the UK will be playing Christopher Carson in Syfy’s new thirteen episode grindhouse series, Blood Drive.

Set in the dystopian “distant future” of the year 1999, the series features a former cop (Alan Ritchson) forced to partner up with Grace D’Argento (Christina Ochoa), a dangerous femme fatale who has an agenda of her own, as they take part in a death race where the cars run on human blood.

Getting into the acting game a bit later than others, Thomas has enjoyed successful casting in some stand out shows. As mentioned he was in Charlie Brooker’s critically acclaimed Black Mirror series; Thomas’s episode being Hatred in the Nation which he starred alongside Scottish actress Kelly MacDonald (Gosford Park, Nanny McPhee) in a tale about a string of mysterious deaths that appear to be linked to social media. Thomas also starred as, Big Ray the political activist, in BBC’s Undercover alongside Adrian Lester and Sophie Okonedo.

Now, as one of the Blood Drive series regulars, Thomas stars as American cop, Christopher Carson, who finds himself out of his depth when he becomes involved with the outrageous Blood Drive. #TBB10  caught up with him to find out more…

1# Hello Thomas, tell us what Blood Drive is about in a nutshell?

Hi, just want to say I really enjoy what you guys are doing, thanks for taking the time to speak to me. Blood Drive is set in an alternate timeline of 1999, where gasoline costs $2000 a barrel and the water supply is rationed. Poverty and crime is high, so in response, the police force has been privatised and extremely violent. Arthur Bailey is the last good cop, he and his partner Christopher Carpenter stumble across an underground race called the Blood Drive; where the cars in the race run on human blood and the winner gets a $10 million prize. Arthur is mistakingly paired up with one of the racers Grace D’argento and forced to take part in the race. It’s absolutely crazy the stuff that goes down in this show.

2# Did you hear Blood Drive was being made and had to be a part of it, or was it sent to you as a matter of ‘would you be interested’?

No, I’d heard nothing about the project before. My agent sent me the script and casting notes, and because I was busy I didn’t open it straight away. I saw the notification of the email saying “Blood Drive” and I thought maybe it’s going to be a drama involving paramedics, and doctors you know like an ER type of project… oh, how wrong I was.

3# What were your first thoughts when you got hold of the script?

Wow, how do they think they are going to get away with this?! It was the most insane script I’d read and this was going to be on TV. I read some of the things my character had to go through and became slightly apprehensive. Because there was a lot of nudity, mental and physical torture, it was totally new ground to me, but I find the best way to grow as an actor is to throw yourself into uncomfortable situations. Like the stuff that happens to my character is truly horrific, but I learnt so much playing him. I managed to do the stuff I feared the most, so there’s not too much that I’d be phased by on set now.

4# …your character Christopher Carson did you audition for this role specifically or did they offer this to you?

No, I had to audition like everyone else. I went down to Spotlight offices and I auditioned for Kristina Erderly. I think I auditioned at the end of May and forgot about it, my agent called me in the second week of June to tell me they wanted to see me again. So it was like three weeks untilI got the recall and two days after the recall my agent called and said I got the role.

5# Tell us a bit about Christopher, what his intentions are, how you connected and found his personality and how integral he is to this world?

Christopher is a cocky, confident, ladies man. He and Arthur are best friends and partners in the show. He’s more crooked than Arthur because he does his job and does it well. Arthur can often convince Christopher to see his side of things, and as a result makes his moral compass point more to the north than it usually would.

Christopher is totally different to me, I’m very reserved; he’s a brash cop that uses violence on a daily basis and in turn has an abnormal amount of violence happen to him. How do you play that? I had to do a lot of research, then I slightly based his personality on a mixture of two of my friends, it was difficult at first, but then I started getting a rhythm and it fell into place. Arthur and Christopher get separated, so the story then also follows Christopher trying to find Arthur and he gets in way over his head. 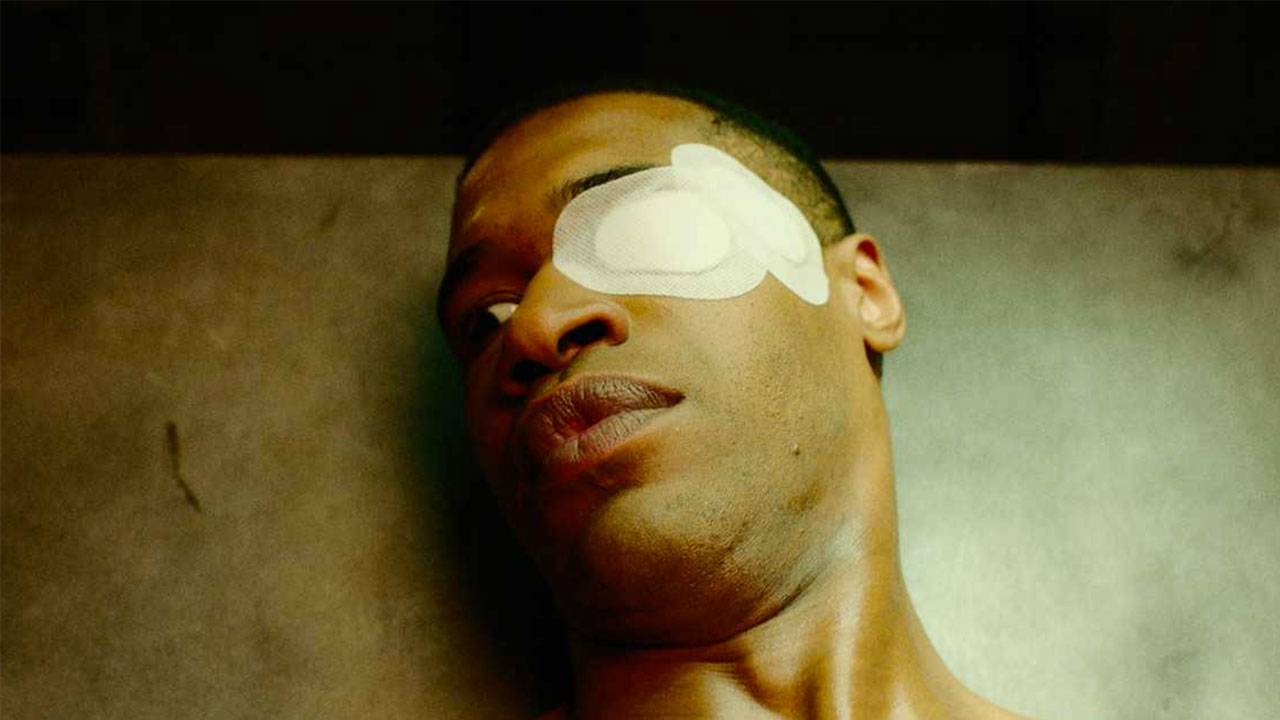 6# Looking at your career there seems to be a long gap between your role in Navarro and then Undercover… Did you take a break or were you on stage or doing something else related to the arts? If there was an actual break how difficult or not, did you find it getting back into acting?

Lol, I’m glad you asked that question… I was never in Navarro, that is some random credit that popped up on IMDB while I was shooting Blood Drive. Someone told me about it and I called my agent, and he told them like a year ago but they still haven’t taken it down. But people told me if you Google Blood Drive a picture of a random middle-aged French man comes up under my character name, and people were telling me to make them change it to my picture, but I find it quite funny… I’ve had one of his now and he has one of mine, It’s just the universe balancing it out. Undercover was my first professional role.

7# Undercover was considered quite ground breaking with it being the first time in a long time that a British production had a central family of colour, with race not being their issue although the overall theme had racial strains… What was it like being a part of it, and working with British greats Adrian Lester and Sophie Okonedo?

I love these questions, you guys have actually done your research! That whole experience was actually mind blowing. You have to understand, when I auditioned for the role I knew nothing about how big the project was, and I had no idea who the leads were, I only knew it was for the BBC. So when I walked into the first table reading I got the shock of my life; not only were the leads two British greats, but my mentor Robert Whitelock was cast in one of the roles too. I remember looking around the table at all the heavyweight actors that were cast in the show and thought to myself ‘my gosh, what have I done!?’... I felt so overwhelmed. The next thing I know I’m in scenes with actors I grew up watching. They were absolutely amazing to work with; Adrian was giving me so much advice, he was so supportive and really intelligent. On the first day during lunch, I told him this was my first role and he was genuinely happy for me. I loved working on that show.

8# You were also in Black Mirror, which has taken off as the must watch cult series! So it seems you’re getting cast in all the right places, tell us your secret… Also where are you based?

Yeah, that’s a great little series. I was fortunate enough to be given a direct offer for that role. James Hawes the director of the Black Mirror episode was the director of the first three episodes of Undercover, and I guess he liked my work. So one morning I woke up to like seven missed calls and voicemails, my agent was going mad. Then James called me and said, ‘I’ve got this really small role it’s only about five lines, but I really want you to do it, that’s why I’m calling you directly’. Such a great guy! Then he told me what the project was, I said of course! I loved working with him, and a chance to be in Black Mirror? Even if he asked me to stand in the background holding a cup saying nothing, I would’ve said yes!

There’s no secret I’ve just been extremely blessed, I wish I could tell you guys a magic formula that you could share. But I will say this: be persistent, consistent and hone your craft, always strive to be better. I’m based in London at the moment. I get to do auditions and self tapes for the US right here. I was always told never go to America until they want you to go there. I’ve never been to America in my life, but I’ve played two different American characters, it’s crazy.

That’s a tough one. Because the industry is shrouded in secrecy and we have to sign non- disclosures before we even meet casting directors, I can’t really talk about stuff. But I can say I’ve had meetings with some amazing directors.

10# Dystopian films and TV series are quite common these days, out of all the recent releases, which do you wish you were a part of, which character and why?

Yeah they are quite common. I think we know as a species how fragile our system of civilisation is, if we overload one end slightly and the whole thing can crumbling down. I think that resinates with a majority of people. But to answer your question, I really like the Character Eli from the Hughes brothers film  The Book of Eli. That tragic lonely existence roaming through a violent wasteland with a purpose, he doesn’t look for trouble; guided by faith. For some reason that speaks to me. I really like Denzel Washington’s interpretation of the character.

Blood Drive will be coming to UK screens on the SyFy Channel August 10th at 10pm.