Sister Act Live Choir will boast a choir made up of 35 gospel singers and full band, as they accompany the onscreen nuns with live performances of songs from the film soundtrack.

I’m Dele Aro the founder of Amacoast Cinema. I’m a British born Londoner of Nigerian descent with a keen interest in all things marketing and media related.

2# Tell us about Amacoast Cinema?

3#  What inspired you to create Amacoast

For a long time I’ve been frustrated by the lack of diverse black images in mainstream media – too often the same narrow images are projected: athlete, criminal/gangster, musician and the comedic personality – arguably the images of black women are even more narrow. What I find most concerning is the potential impact these narrow images have in terms of the expectations we (the black community) set for ourselves and the expectations set for us by others. I see Amacoast as the very early steps of a journey to tackling this problem.

4# What’s the meaning behind the name?

Ama is actually my initials and coast came about from asking Caribbean and African friends about words they associate their country. I like the letter ‘c’ after the letter ‘a’ as the original logo had these two leaning on each other, which to be symbolic of unity between Africans (letter ‘a’) and Caribbeans (letter ‘c’).

5# What is the most important ‘thing’ in pulling off a successful immersive cinema experience?

I would say it’s the film and staying true to themes of the film. The majority of guests are coming out for a film they know and love and what they are looking for is an authentic experience that allows them to enjoy the film in a new way. As a result, in the planning stage we watch the film about half a dozen times taking down extensive notes over a period of a couple of days. 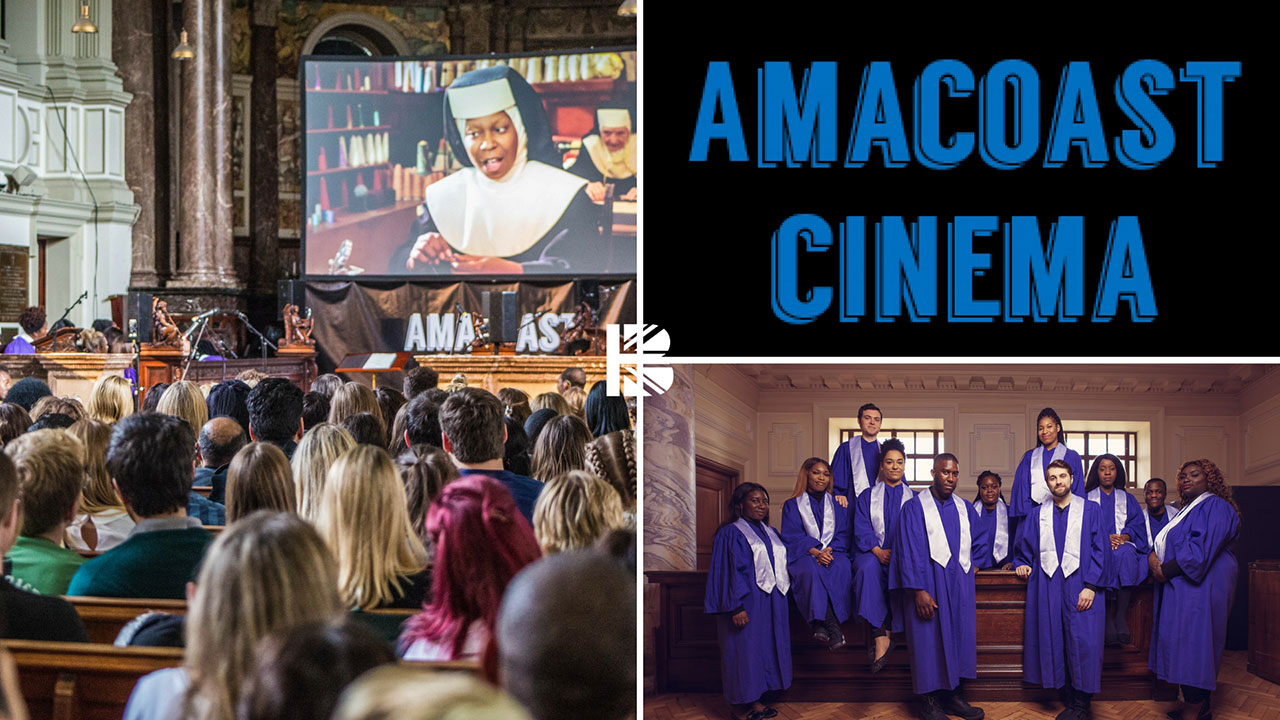 6# Amacoast previously put on a Love & Basketball event, how easy was it to convince people to attend and how do you finance something like this?

For Love & Basketball is 15 we, in partnership with We Are Parable created an all-American basketball experience to celebrate 15 years since the release of the iconic film. We went all out on the idea, we installed a basketball court, hosted the London Lions basketball team (and their cheerleaders and mascots), ran a slam dunk competition, hired tricksters, basketball arcade machines, a DJ spinning 90s tracks, American street food and screened the film on a 19-ft. projector screen. The event was unique as I was convinced that once we got the word out we would sell out given there was nobody doing what we wanted to do (at the same scale) for black film – and thankfully I was right. The event was financed through a combination of personal savings and credit card debt.

7# Tell us about the upcoming Sister Act Live Choir event, why Sister Act?

Two reasons really… firstly (which is related to what I said earlier), Sister Act is a well written film with a multi-faceted story which is why it’s stood the test of time. The story I’m most engaged with is the one of the outsider –  Deloris Van Cartier – played by Whoopi Goldberg, drives change in an established organisation after initially dealing with scepticism from a senior figure – Mother Supreme – played by Maggie Smith. Secondly, we were searching for a film that would complement gospel and a live cinema experience – and Sister Act ticks both those boxes.

8# What can the audience expect from this event?

Guests at Sister Act Live Choir should expect an electric, powerful and uplifting gospel inspired performance. To accompany the on-screen nuns will be the Uplifted Voices choir with 35 singers and band. There’s also special guest performances from MOBO award nominee Volney Morgan & New-Ye and Britain’s Got Talent Semi-finalist Gospel Singers Incognito. The show takes place in Central Hall Westminster, which is not only rich in history is honestly a visually stunning venue.

9# What’s next for yourself and Amacoast Cinema?

You’re only as good as last show so we’re really focused on putting on an amazing six Sister Act Live Choir shows. Having said that, earlier in the year we did start planning for our next show which we plan to release potentially later this year. I won’t reveal what film just yet, although we want to move through different themes so it definitely won’t be basketball or singing related.

10# If budget was irrelevant, which film would you love to give the Amacoast Cinema experience to?

That’s a hard one, either Boyz n the Hood or Coming to America as the unlimited budget would allow us to create an entire world for guests… almost like a film set.

Sister Act Live Choir The show opens on 21st April 2017, tickets are on sale now. Find out more and book your tickets here.