Six Rounds, is a new self-financed film that, having been made for £7000, has just been given a release date of 9th April (UK) and 21st of April (US) after being acquired for distribution by a joint UK/US distributor.

Six Rounds is a piece that deals with race, social economic issues and acceptance in the modern world. The film focuses on a boxing match amidst the 2011 London Riots and the killing of Mark Duggan. It stars Adam J Bernard as the lead (Star Wars: The Force Awakens, Holby City, currently in Dreamgirls on the West End in London) Phoebe Torrance (Friday Night Dinner) and the Director of Photography is Haider Zafar (Vendetta).

Six Rounds is helmed by young up-and-coming Director Marcus Flemmings, who independently financed the production. Flemmings believes the film has a lot to say not just about the causes and consequences of the 2011 riots, but also for those who find themselves marginalised in society today.

The British Blacklist spoke to Flemmings back in September 3016, #TBB10 caught up with him to find out what’s been happening…

1# Tell us a bit about life after we first spoke about you?

Life has been a bit of a whirlwind – at the same time I was launching BAME Models & Talent Management, which focuses on getting models of colour into mainstream fashion, TV and film. It took off really well and has swamped my life since. Working with clients such as Apple, Charlotte Tilbury, Rare London and many other brands. Then in Jan I found out that Six Rounds, had been picked up for distribution by Flix Premiere. Since then I have been interviewed by various media outlets, including the Evening Standard last week. The film has also had several amazing reviews – which has been overwhelming.

2# It’s great that Flix Premiere have picked up Six Rounds as its distributor with a UK & US release date. But distribution is notoriously difficult for independent filmmakers, how did you go about securing this?

I contacted the BBC and Channel 4 for possible acquisition. They watched the film but didn’t take it on – I thought the film perfectly fit their remit — It was 60 mins long. It was about a poignant subject matter. Maybe because there wasn’t any gun crime, light drug references and a lack of negative portrayal of black characters it didn’t quite catch their attention. Which was fine, I always knew it was always going to a tough sell. The film only cost 7k to make so I’ve had to fight against the grain since the first minute of writing the script. Other distributors also passed on it. Then it was shown at the East End Film Festival, Hong Kong Film Festival and Sankofa Film Festival and was attracting a lot of attention online. So, I decided to push the film further and then Flix Premiere picked it up.  My co-directorial debut with Haider Zafar, The Conversations, was self-distributed by ourselves on Amazon last year – which if you’re aspiring filmmaker is also an option for you.

Politically, it’s possibly even more prevalent, with Trump winning the election, Brexit coming into play and more focus on Political correctness. Also, with the recent Oscar wins for Moonlight (and Barry Jenkins) and the increase in Hollywood films with black talent — Hidden Figures, Fences, Get Out, it is even more relevant in 2017. I feel Six Rounds was written with me thinking not just about the riots, it was written with thoughts toward religion, regrets, decisions, etc. on a grander scale so the themes are timeless.

4# How did the 2011 London Riots affect you as a filmmaker and personally?

They didn’t really affect me as a filmmaker, aside from the fact that I made a film about them. On a personal level, I saw them from afar – on one hand, I was troubled by them. But on the other hand, I actually wanted them to continue. The thing that sparked it off, the murder of Mark Duggan was appalling. But this is an ongoing issue where black male/females have been slain by the police and I was happy to see a reaction that wasn’t just some politician looking for votes speaking out about it. I liked the fact we saw action. But having said that, a lot of rioters weren’t rioting about that particular murder. It became a way for people to vent their frustrations about society and social economic issues. As well as a way for opportunists to get free goods through looting!

5# Tell us about what inspired you filming in both monochrome and colour?

The film’s style is reflective of what I consider to be the right way to make films. I feel every film I watch nowadays wants to beat you into submission with noise, visuals and trailers that tell the whole story – a trend perpetuated by these ridiculous Superhero movies that seem to be coming out every week. I am great fan of films from the 40’s and 70’s where less is more. Scenes play out realistically with minimal emotion-giving music and camerawork that is intrusive. The monochrome in the film reflects the drama and conflict – the colour reflects the moment our lead character feels love and warmth. 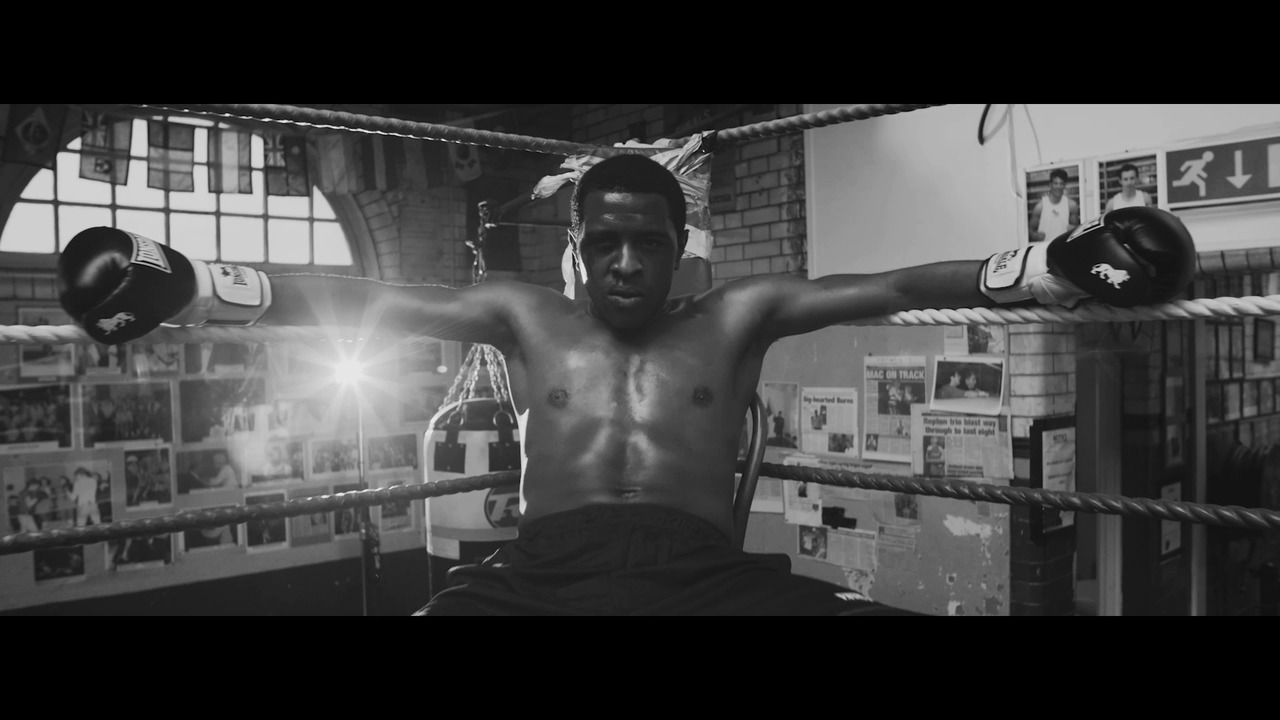 6# Your lead Adam J Bernard is currently doing an amazing job as Jimmy Early in the West End production of the Dreamgirls, have you seen him and what was it about him that made you choose him for the lead?

I was meant to go see him 3 weeks ago, but couldn’t make it in the end. Other cast members have seen him and been waxing lyrical about him. Adam is possibly the most talented black actor in the UK, I have said this before and shall say it again. He can sing, dance, act. Has emotional range. Knows when to be funny, when to be focused. You’ll see him in US films, TV Series and more over the years. Watch out for him!

7# What was the inspiration for Stally, Bernard’s character?

There are elements of Stally that are directly from my own thoughts and behaviour. There are also moments when Stally does things that I wouldn’t do. He is almost a morphed character – blending various characteristics I see from other people and how they react to things. I think more than anything, for 3/4 of the film he is an observer. Almost like our eyes into the things around us. The characters he interacts with are a cross section of society that we see every day. I wanted to reflect the anger, the calmness, the decision-making, the conformity and the adversity of us all. Just like the riots. We endure the things around us, then something happens that sparks our anger, then we react. The character goes through the same journey.

8# What inspires your creativity?

This is going to sound very insular, but film inspires me. Watching films can be very helpful. Both in taking in all the wonderful moments in film and all the bad things about films. Nowadays there’s a lot of bad to take on board. It makes me worried for the future of film if kids are watching some of the things we’re subjected to watch. The basics of filmmaking are crumbling away. I also love music – again back to the past with anything from the 50’s, 60’s (Bob Dylan, Stevie Wonder, the whole Motown movement, Al Green, Rolling Stones) and 90’s rap.

9# What were the reasons for using the sport of boxing as one of films main themes?

Brutality and the similarities between sport and life. The playing of a sport with the goal of winning/succeeding. The failure to win. The decisions within a sport. Sport is so huge for a reason. It reflects us as humans.

10# What have you got coming up next?

I am working on two projects. One is a project with my great collaborator and the highly insanely talented Haider Zafar.
The other will maybe be another self-financed film called One-Ten a post-revenge, Samurai story set in the future.