Emmanuel Nwosu is an emerging producer who is currently working on the new play Sweet Like Chocolate, Boy by award-winning writer Tristan Fynn-Aiduenu.

#TBB10 caught up with Emmanuel to talk all things producing…

I was born in Lagos, Nigeria and moved to the UK when I was thirteen. According to my passport, I am British Nigerian. Lagos reminds me I am half Igbo/half Yoruba. Most days before 6am, my name is Emmanuel Nwosu, after which it changes depending on what job role I have to do from sunrise to sunset.

2# How long have you been a producer?

The funny thing is I only claim that title in formal or official gatherings. Most times I am just running around sorting out projects. It all started, 2012 at East London Shakespeare Company where I worked for 3 years as a project coordinator under the management of Jesse Ayertey (another one that won’t claim his title but a very much needed creative eye in our generation). I learnt a lot about myself and my love of management in the organisation, developed various community-based project targeted at schools including Wrestle With Words, and co-produced several Shakespeare plays including Othello, Romeo & Juliet and more.

In 2014, I started working as project manager in a social enterprise named, Alwayz Kreative. The organisation’s focus at the time was, “creativity in improving the social economic mobility” of young people within the south London. The founder Kheron Gilpin is fearless and daring. To think two people meeting at Prêt in Liverpool street could lead to raising over £45,000 for community-based projects; collaborating with organisations including Southwark council, Livity, M.O.P.A.C, somewhereto and Raw material, birthing 5 social enterprises and creating jobs for 6 creative professionals is just crazy. It’s been about 5 years now.

3# What was it that said you’d rather produce than any other area of theatre?

It’s not a matter of preference as I have a lot of creative outlets within theatre arts I enjoy. As creatives, we love to create, and finances dictate the scope in which we get to express ourselves. I got tired of waiting. It’s my narrative, my story, and idea if I don’t take ownership of that, who else will? Those were the thoughts nurturing those late night funding applications, lengthy network meetings, and outsourcing credible individuals to make ideas reality. Also, it helped further my understanding of art from a business standpoint, which is something we often overlook. Every creative within the theatre arts industry should develop skills relevant to production, especially those who plan to be writers. Your work will not always be selected by theatres and sometimes you will have to make it happen yourself.

4# How have you studied the profession?

Production was a mixture of serving under various social enterprises, studying business management, and spending over 3 years working in theatre companies such as East London Shakespeare as a project coordinator. I don’t think it’s something you will fully grasp academically; you’re dealing with human resources, finances and a bunch of logistical factors. You learn through practice, failures, and having a mentor.

5# what are the steps necessary to take to become a successful producer?

I would suggest developing skills [in] writing proposals, networking and event management. Work experience with a theatre company, charity or organisations who implement community-based programs or planning small to large scale events consistently will help. Be ready to know that even if you have structured plan, things won’t always run according to your calendar. As a producer, you must be ready to adapt. There are few more factors but if you can manage the above, you’re in good hands. 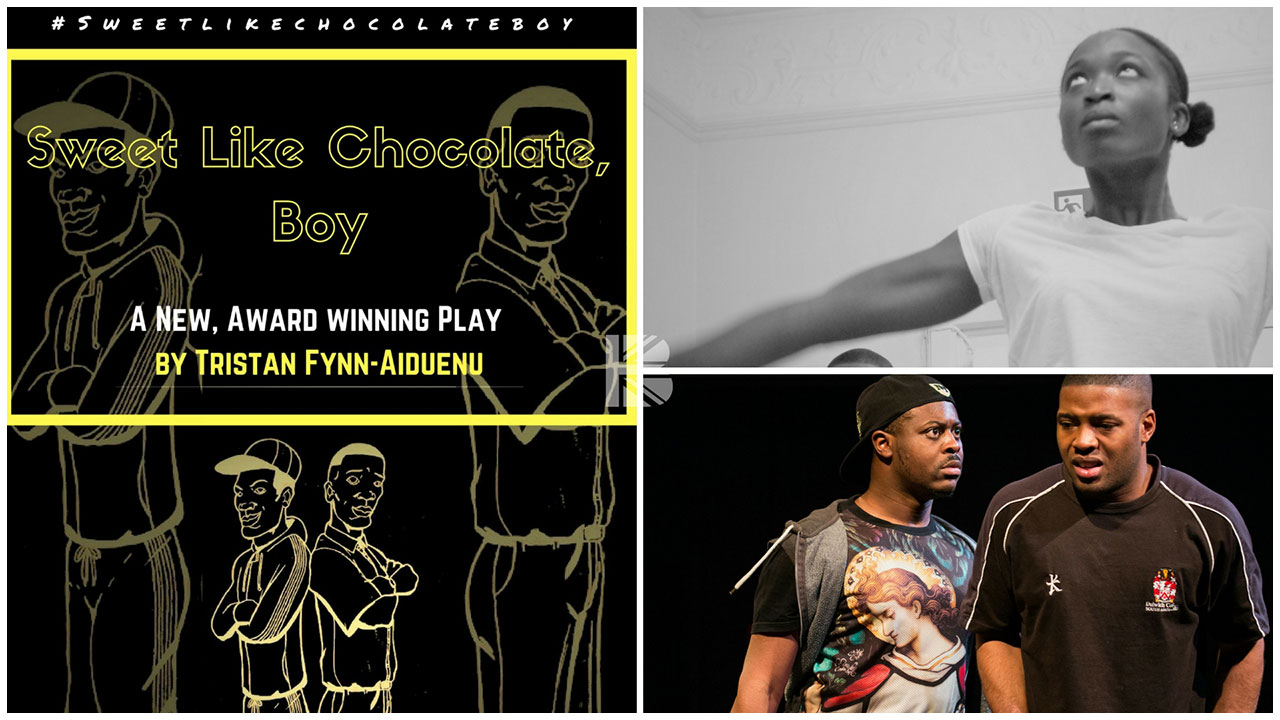 6# Tell us about this latest production Sweet Like Chocolate, Boy?

Sweet Like Chocolate, Boy is a spoken word, storytelling play that critiques contemporary Black British identity and methods of survival through the lens of two teenage boys on a mythical estate in south London. The themes explored in the scratch production include masculinity, mental health, faith, Black British music & race relations within a modern British context.

7# How did you discover Sweet Like Chocolate, Boy and why did you decide to produce it?

I first saw an excerpt of, Sweet Like Chocolate, Boy at Melanin Box Festival in 2015 and was very impressed with the performance. What stood out was the lyrical nature of the text, its use of humour in navigating the various complexities of Black British identity; the role of music as a form of spirituality and hope in black culture, and characters who are extremely unapologetic about who they are yet lost in some sense. Characters who offer questions “What is Blackness?” and my favourite, “What is your Black?”. The play for me is an attempt to give those questions a pulse. I remember meeting with the writer Tristan Fynn-Aiduenu and having long discussions about the themes of the play. Then he asked me if I would want to join him in making it happen.

8# How do you as the producer and the creator Tristan work together, who’s the ‘boss’, how does the relationship work?

There is no boss, just clear delegated roles and allocating the right person to execute. Most of the decisions in terms of logistics are done through collaboration and negotiation. We also communicate on a consistent basis which is important for any project success.

9# What’s the most challenging aspect of being a producer?

Within the art sector, major issues surround budget and allocation of finances to meet the demands of different projects. A producer’s role ranges from managing the project, raising funds and investments, and finally negotiating commissions. All of the above pose a challenge, however. Acquiring the finance to fund a production cost is one of the most challenging tasks.

10# Name a production you wish you’d produced and why?

Little Baby Jesus by Arinzé Kene. I appreciate when a writer marries adventure and chaos without presenting them as two conflicting ideas. You get to see all the virtues and vices of youth culture live in harmony. The only thing which the characters in the script are attempting to save, in my opinion, is that energy you once had as a young person. That curiosity and daring nature are what the play persuades you to remember. To not forget when the achievement was the school playground, popping a wheelie on a bike, and believing you knew what prison was like because you went to after-school detention. We tend to forget how to form joy out of simplicity as we transition into adults.

Sweet Like Chocolate, Boy will take place, 1st April at 2pm, at The Cockpit theatre. More details can be found here.