By Tamika Mitchell
13th May 2017
Facebook
Twitter
Pinterest
WhatsApp
Artist Happi has been on his music journey for a few years now releasing music that encourages people letting them know that they will see better days. His latest EP Boy And His Imaginary Friend is no different when it comes to that ethos. The rapper’s lead single Forever premiered on Nylon Magazine who among others, have supported his music and for good reason.

The singer, songwriter, rapper and producer who has no boundaries when it comes to his music and creativity spoke to TBB about his EP, the journey that he took to this very moment and what listeners can expect to hear on his latest project…

1# Introduce yourself, where do you come from?
I am Happi, the big kid from North London. I love God, love people and love music! My parents are originally from Nigeria, the home of the hustler. They moved here after they were married and had 3 crazy kids, one of them being me! I was born and raised in Hackney, then moved to Enfield before I started secondary school.
2# Where did the name Happi come from?

Happi comes from a spiritual experience I had as a teen. I am someone who has struggled with depression growing up. Nothing would satisfy or make me feel good about life or myself, I tried everything but nothing worked. Then one day, I decided to try and talk to God, I asked him to give me a contentment that didn’t make sense, one that no one could explain and in that moment, that is what he did. From that moment, I decided to make a challenge to myself to stay happy and share that happiness with others.

3# What is the inspiration behind your new project Boy and His Imaginary Friend?

Boy and His Imaginary Friend was inspired by my journey through my faith. Finding faith as a young person was like having an imaginary friend, I felt like I could do whatever I wanted. As I grew up belief that anything is possible began to fade and I started to worry, become anxious and then ended up depressed. The project is about my journey back to finding my inner child in order to become a man that believes in faith, love and endless possibilities just like a child would.

4# Did you have an imaginary friend when you were growing up and what made you choose this title?

I didn’t have an imaginary friend myself but I had a crazy imagination. I had so many toys and could make anything out of what I had. I chose the title because I felt like everyone could relate. At some point we all want to be like a child with a friend we can talk to, have fun with and bring all our problems to. 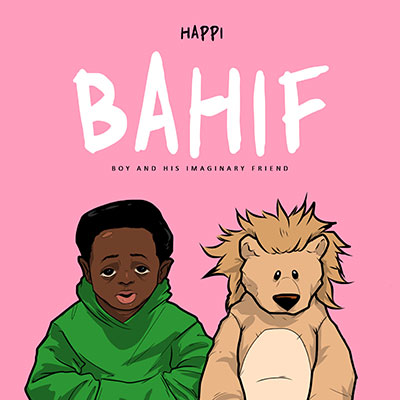 5# What are your favourite tracks on the EP and why?

My favourite track on the EP always changes but right now it’s 10 Feet Tall. That song always reflects my heart when I am busy running around doing things. It just reminds me that it might be hard but God’s got me, on his shoulders. I am taller than I could ever be on my own.

6# Your lead single Forever was premiered on Nylon Magazine and received rave reviews, how did it feel to get such positive feedback?

It was amazing! Low self esteem has always been something I have had to battle with so to see people take to the music so positively was humbling! Big shout out to We Plug Good Music too for their amazing PR work.

7# There is an infusion of sounds throughout the record you can here UK rap, R&B, Afro pop, some drum and bass and an array of other influences what inspired such an eclectic sound?

I listen to an very eclectic array of music and I didn’t feel like I could represent the ‘Boy’ correctly without writing out of all of those influences that created the man I am today. At heart, I am a song-writer and believe every project, album or EP should draw from different cultures and sounds in order to depict a relatable story.

8# The record was co-produced by yourself and Komenz who has worked Ghetts, Dot Rotten and Wiley; you also previously worked with him on the Blackout EP alongside Melvillous. What was the collaboration process like on this record did you always see eye-to-eye?

We had created so much synergy in the past by sharing experiences and life together that it was super easy to make the project. It was a smooth week in all and I think we didn’t even know the project would do so well.

9# Who are your biggest musical influences? Is there anyone on the UK music scene that you admire and would like to collaborate with?

My biggest musical influences are people like Kanye West, Jon Bellion, Mali Music, Rudimental, Samm Henshaw and Wizkid. From the UK, I love listening to people like Wretch 32, Samm Henshaw, Shakka, Tiggs Da Author and Skepta. I would love to work with Wretch and Samm Henshaw one day, even on the same track!

Next, I have a few singles lined up to be released this summer, a remix to Southside and a music video and maybe even a sequel to Boy and His Imaginary Friend. I am also looking forward to performing a lot more around the country.