Just a Couple is a new BBC Three comedy series about the trials and tribulations of a hilarious millennial couple and their clashes.

Everything and anything from TV cheating (don’t watch the rest of Luke Cage without your boyfriend) and whether to make relationships public on social media? Starring Michael Salami and Frieda Thiel and created by Sebastian Thiel, writer, and director Just a Couple is set to take the Internet by storm.

TBB caught up with its lead stars for a #TBB10 moment…

1#Tell us about the series and about your individual characters and what’s holding them together?

Michael: This series is your modern day UK version of My Wife and Kids, just without the kids. Taking you on a comedic journey, following millennial couple Mark and Shavon who go through everyday life/relationship challenges. My character is Mark Johnson, a graphic designer deeply in love with his long-term girlfriend Shavon Scantlebury. Mark is a determined guy who loves to please his girlfriend the best way he knows how. What holds them together is love.

Frieda: What’s really cool about this series is there is nothing like it right now. It’s a refreshing take on relationships with young people today. I’m really proud of Just a Couple and excited to share Shav with my Londoners. She’s a relatable character, she’s driven and motivated, she has her own way of dealing with situations which can come across as assertive or direct and she makes mistakes like we all do. She’s not perfect, she’s also got a playful side to her which is nice for viewers to see. What’s holding them together? Love! And of course, she sees great potential in the man Mark can become – with a few tweaks!

2# What does Shavon want from Mark and vice versa?

Michael: Mark just wants Shavon to be happy. Happy in life, in their relationship.

Frieda: Shavon wants Mark to step up his game like most women. Can she get him to do that? We will have to see!

3# How closely do you guys relate to your characters?

Michael: In some ways, I would say. All the way through filming I generally felt pain at some point as I could relate to the circumstances.

Frieda: Shav is a part of me. I am able to tap into parts of myself to play her, so I can definitely relate to her on many different levels. But nevertheless, she has a very different approach on how she deals with issues and challenges.

4# How close do some of the scenarios Mark and Shavon find themselves in, hit home to yourselves in your real lives? Are you both in relationships, are you worried about having to face the music at home?

Michael: Oh boy like you wouldn’t believe, not word for word so you would think the creator Sebastian Thiel wrote some of the scenes based on my life. But fundamentally I think every male can relate to Mark and every female, Shav and vice versa (but mostly Mark #TeamMark).

Frieda: Mark and Shav are made up characters. When it’s a wrap, we place them away in a little box and carry on with our lives.

5# Just a Couple, has already enjoyed great success online, what can we expect from its move to BBC 3’s YouTube platform?

Michael: You knows what’s beautiful, the journey shows hard work, persistence, and patience pays off. What you can expect is a piece of art that shows another side to our modern UK society, not your stereotypically clichéd roles. This intel will hopefully show other channels and producers that there’s more to just our stereotype. I’m praying it travels far and wide (cough, cough Netflix).

Frieda: It’s on a whole other level from when it first started on YouTube and I mean this in a positive way. All episodes are fresh new scripts, fresh new scenarios and I can’t wait for you all to see it! 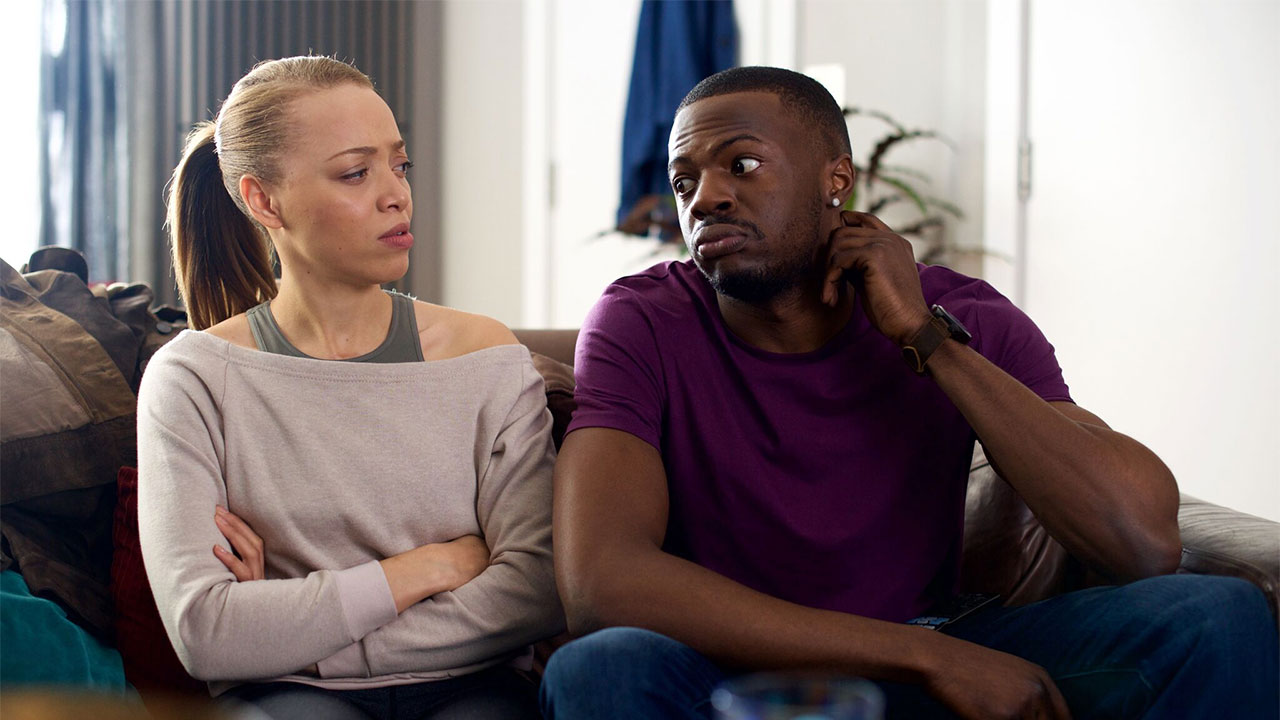 6# Are relationships among young black folks in trouble and under pressure from all the popular culture cheating influences etc. Or are the younguns more about this relationship life?

Michael: I can’t speak for the younger generation. But from what I’ve seen amongst my peers, I believe I am seeing a rise in relationships and building families. Maybe Jay Z and Beyoncé and Stormzy and Maya? Yes I’m single and boy do I want my Beyoncé / Maya queen to just slide in my DM’s already.

Frieda: Yes, we are in trouble, and no it’s not just black folks. Commitment is definitely an issue.

7# Michael, you spent some time in America recently, what’s it like out there for an actor, are you staying with us in the UK or are you planning on relocating like some of your peers?

Michael: My time in the US was life-changing. It was the toughest and most challenging journey I’ve ever embarked on. But I would do it again in a heartbeat. Because not only did I grow as an actor but also as a human being. I learned a lot about life, culture, the arts, languages, people, food, music etc. Just leaving everything behind to focus on becoming the best version of you was the best gift I could give myself. Growing as an actor is simultaneous with growing as a human being (as Stella Adler would say) and I now live by that ethos.

For a UK actor out there it’s tough, as not having a visa to work can close a few doors for you but it’s not impossible to get work with the right people behind you. I’ll be staying in the UK for the rest of this year as I’m currently working on a TV show here. But would also love to work out in the US. When I do, I will relocate there but just for that period of filming.

8# Michael have you worked with Sebastian before, is there any awkwardness knowing you’re filming intimate scenes with his sister? Frieda, this isn’t the first time for you, what’s it like working with your brother?

Michael: Haha nope there was absolutely no awkwardness because I’ve been working with the both of them for over 5/6 years, we are practically family. The love I have for them is real. In fact, Sebastian invested in our relationship to get our on-screen chemistry down to a tee. He paid out of his own pocket for Me and Frieda to attend a Lucid Body class (Life changing actor training)! Which really brought out a lot of things for me and Frieda, which comes out beautifully on camera.

I’ve worked with Sebastian on his directorial debut short film, Illegal Activity – played the lead, along with Fill Me In (Lead Voice Over), Friday UK (Smiley) and a couple of music videos. I truly knew from the moment I stepped into that audition room for Illegal Activity from then, there is something different about this guy. Sebastian is ahead of his years and is one of these most humble, hard-working, intelligent, funny, inspiring and full of life humans I’ve ever met. Whatever this man is involved with, I will wholeheartedly support.

Frieda: Could I ask for a better job? This is my brother yo! How amazing is that? I love my brother to bits; that’s my womb partner right there. I’ve always looked up to him and admired how hard he works. The dude is talented, his hustle has been real and such an inspiration. Honestly, seeing him grind and maintain self-motivation has been my fuel on my own journey. I could never ask for a better job than this. When it comes to work, we do what we have to do professionally to make magic and that’s all. Everything else is in a box somewhere at home with dust for another day haha. Work is work – simple.

Michael: Currently filming for a TV show which will be revealed in a couple of months and also working on my company, Action – a motivation platform for all like-minded individuals who want to succeed in life in full pursuit of becoming the best version of them.

Frieda: Whatever God has in store for me. I’m just going with flows of the waves, that’s all.

10# What’s the greatest piece of relationship advice you’ve ever been given?

Michael: Treat your woman like a Queen – Mark Johnson (#TeamMark)

Frieda: My mum’s the best for advice and metaphors. She’s told me a few actually, but here’s just one – Never ever let your partner feel like you are competing with them because you’re meant to compliment each other. For example, some people have to have the last word in an argument because of their ego and because of their ego, arguments escalate to becoming hurtful. Words live on long after being said, especially hurtful ones. It’s not about “winning” the battle against the one you love. It’s about teaching each other how to be better partners to one another. In fact “winning” against someone you love is ultimately “losing”.