I’m Vanessa, I’m a theatre maker from London. I studied dance and drama at the University of Lincoln and went on to do an MA in The Body in Performance at Trinity Laban. It was only during my MA that I became interested in how my performance practice could extend the theory I was reading.

2# How long have you been a performer?

One year. I finished my MA and started sending my project to theatres and applying to open calls.

3# What inspired you to become who you are in this industry?

The transformative power of theatre. Performance that makes you think and rethink.

4# Can you recall your first live performance, what it meant to you and what did you learn?

‘How to Come Out Black’ was shown as part of NOW17 at the Yard theatre. I was lucky enough to work with Greg Wohead and Rachel Mars as part of the festival. It was my first performance after leaving university so it will always be special to me and noted as the moment when I took my practice from being a university project to a working artist.

5# Tell us about your latest piece, ‘Enticement Machine’…

It plays with hypervisibility and invisibility. The black female body becomes hyper-visible is specific spaces. My show was born out of a personal confusion with the assumptions that seemed to be sketched on my skin. I found it useful to engage with pop culture and social media platforms to see how people were engaging with identity politics specifically race and gender but I was still confused by the assumption and visibility of black bodies. 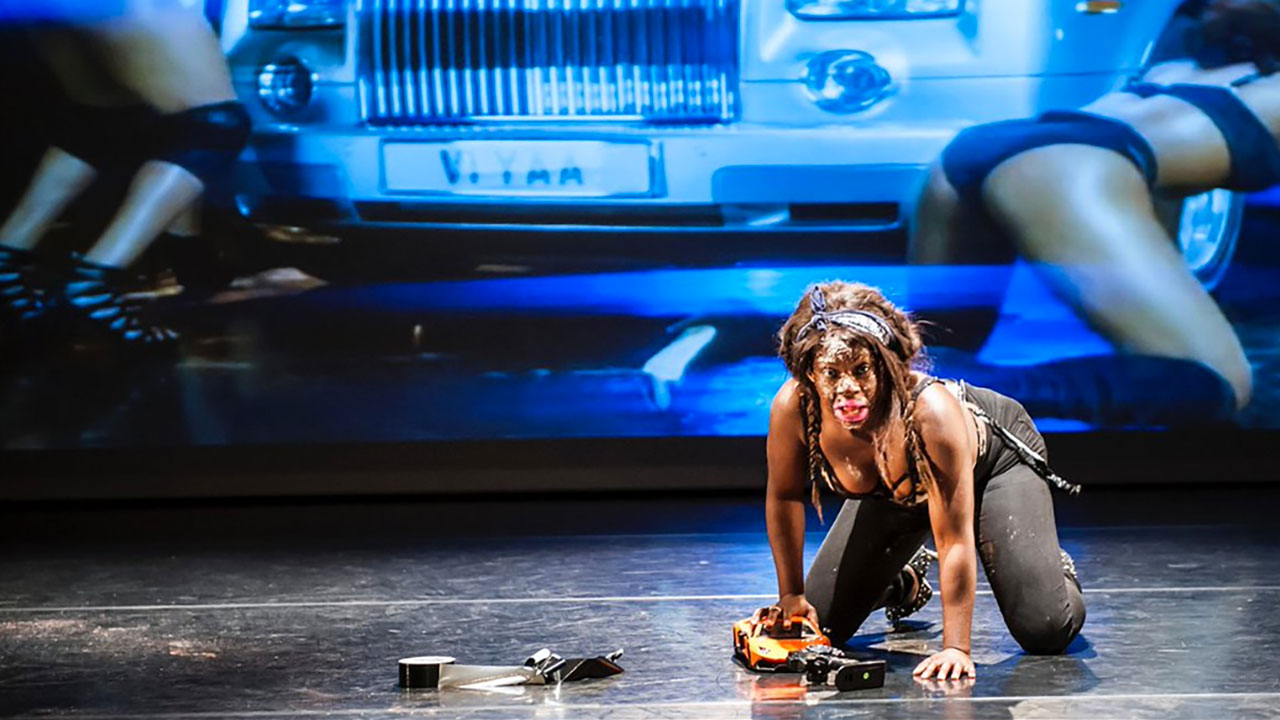 6# What was the inspiration and what do you want the audience to get from it?

Social media was a huge influence. Specifically, a post by MAC makeup who were advertising a new lipstick. Their model was black, which spurred race rows in the comments from the size of her lips, to the shade of lipstick against her dark skin. It interested me how social media can be understood in terms of visibility and how people were engaging in identity politics online. At the time, there was a surge of YouTube makeup tutorials and so were people trying new and weird things in order to go viral? I used these findings as the start of my creative thinking. I took all this absurdity to critique the visibility of the black female body. I think it’s important to rethink how we engage with some of these images on social media. I’m holding up a mirror to images that are familiar and asking the audience to relook at it with me because I want to question the assumptions of blackness and femininity.

7# What was the first visual that affected you negatively as a black woman and how you felt you were being represented?

It was Nelly’s Tip Drill video. The sexualisation of black bodies I found problematic because I felt as if the hyper-sexualised expectations were assumptions placed on me.

8# How did you get involved with, Calm Down Dear and how do you ensure black female intersectionality is represented in feminism discussions you’re a part of?

I responded to the open call as I felt my piece would work well within the festival. Again it comes down to visibility. Important and time responsive work is being made but is going unnoticed or undervalued because there are only very specific spaces that will programme specific work.

I’d love to be able to have the opportunity to tour this piece. I’m interested in different audience responses across the UK .

10# How can people keep up to date with your projects?

The Enticement Machine runs as part of the Calm Down Dear Festival. Find out more and book tickets here.